What can a naturalist celebrate in October?

For places in the northern hemisphere with four seasons, it is now well into autumn.  The temperature is cooling and the leaves are changing color and falling.  The harvest is being hauled in, and winter is not far off.  There is a sense of graceful aging in the air.

As for lunar cycles, the 15th will see a new moon, with a full moon on the 29th.

On Carl Sagan’s Cosmic Calendar (illustrated as a comic strip here), which maps the entire history of our cosmos onto a single year, this month is eventful.  After the formation of Earth’s oldest rocks and first forms of life last month, October witnesses two more notable events.

On the 12th (3 billion years ago), life first harnesses solar energy.  Thanks to photosynthesis, the Earth begins to green.  Today, photosynthesis is employed by plants, algae, and many forms of bacteria.

It’s worth a moment’s contemplation that our modern industrial age would not be possible without photosynthesis: sunlight converted into matter by zooplankton and algae and then converted into petroleum under heat and pressure over great lengths of time sustains our fossil fuel-dependent lifestyle.

Then, on the 29th (2.4 billion years ago), life accomplishes the first major act of geoengineering.  The oxygenation of the atmosphere resulting from gases released by cyanobacteria created the conditions that sustain us today.  It may have come at great cost to other forms of life at the time, however:

The rising oxygen levels may have wiped out a huge portion of the Earth’s anaerobic inhabitants at the time. Cyanobacteria, by producing oxygen that was toxic to anaerobic organisms, were essentially responsible for what was likely the largest extinction event in Earth’s history. Additionally the free oxygen reacted with the atmospheric methane, a greenhouse gas, triggering the Huronian glaciation, possibly the longest snowball Earth episode ever. Free oxygen has been an important constituent of the atmosphere ever since.  (Wikipedia)

Other reasons for celebration in October include World Food Day on the 16th:

World Food Day is celebrated every year around the world on 16 October in honor of the date of the founding of the Food and Agriculture Organization of the United Nations in 1945. It is also the Food Engineer day.

The World Food Day theme for 2012 is “Agricultural cooperatives – key to feeding the world”.  (Wikipedia)

The website WorldFoodDayUSA.org has plenty of ideas for action, such as hosting a World Food Day meal. 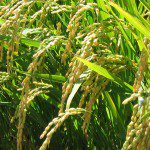 October 10, 2012 ANNOUNCING: New Managing Editor of the Patheos Pagan Channel: Christine Hoff Kraemer
Recent Comments
0 | Leave a Comment
"Congratulations on 5 years! Here's to many more. I'm a trans man, and I've found ..."
Loucke Between Two Worlds: 5 Years Blogging
"Love ya Bri!"
Jason Mankey Between Two Worlds: 5 Years Blogging
"Great insights, Martha. You know that with my agnostic leanings I have a different concept ..."
Willow Rose The Corner Crone: Hekate of the ..."
"A sincere thank you for sharing this. I so appreciate the opportunity to understand others's ..."
Willow Rose Between Two Worlds: Anna, Another Lesson ..."
Browse Our Archives
Related posts from Agora