Loop of Brighid: The Mysticism of Devotion, Part 2

In the ancient Celtic world, there were people with names such as Giolla Bride (“Servant of Brighid”), Mog Nuadat (“Slave of Nuada”), and so forth.

We can’t really say exactly what these names meant to the ancient Celts, but we can get a glimpse of different types of devotional relationship that are possible for any worshiper.

Aritgenos, “bear-born,” might have seen himself as the son of the bear goddess Artio or some other deity whose animal was the bear. Brannogenos, “raven-born,” might have been a devotee of the war goddess Catubodua, or of some other god associated with the raven such as Bran. Cunogenos, “hound-born,” could have been devoted to some deity such as Cunomaglos (“Great Hound Lord”). Urogenos, “bull-born,” could have been a devotee of the Tarvostrigaranus or some other bull god.

Camulogenus means “born of Camulos,” a Gaulish war god. Sucellogenos means “born of Sucellos,” the Gaulish god often portrayed with a pot and hammer and interpreted by many scholars as being equivalent to the Dagda, the father of Brighid. Diovicos, “from the gods,” probably saw himself as being the child of all the gods in general rather than a specific deity.

Diocaros, “a friend of the gods,” is a less-common pattern, but it is similar to the later Irish naming pattern based on the word “cele” or “companion,” as in names such as Cele Petair (“St. Peter’s companion”) and the ascetic monks known as the Culdees (“companions of God”). 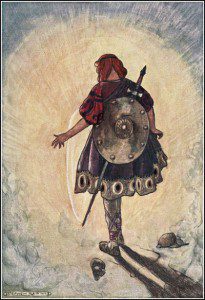 Lugovalos, “strong in Lugos,” must have seen his strength, power and self-confidence as deriving from the god Lugos or Lugh. A similar idea may be conveyed by names like Lugurix, “Lugos-king” and Devorix, “the gods’ king.” Esunertos, “powerful one of Esus,” is a similar name, but it also belongs to another naming pattern in which the person is described as the champion of a god.

Netta Segamonas is an ancient Irish name recorded on Ogham inscriptions. It means “champion of Segamon.” The same name in a more modern form would be Nia Segamain, a pattern repeated in a number of Old Irish names. The idea in this pattern is that the devotee is like a warrior retainer of his lord, the god.

A similar pattern is seen in names like “Cunobelinus” or “Hound of Belenus,” implying that the devotee is as loyal to the god as a hunting hound is to its master. Another category of devotional names implies a life of service to the deity.

An attitude of intense devotion and humility is implied by names beginning with “giolla,” which literally means “boy” but in this context means a servant — as in a Highland “gillie”. This pattern survives in names such as Giolla Bride (modernized as “Gilbride”) which means “Brighid’s boy” or “servant of Brighid,” and can refer to either the goddess or the saint. Many of the “giolla” names refer to saints, as do many of the “Mael” names.

“Mael” means “bald-headed” but implies a tonsure, a special haircut meant to indicate one’s status as a sworn devotee. This doesn’t necessarily mean that all the Mael names refer to Christian devotion, because druids and members of certain pagan warbands also wore tonsures. Maelbrighde, “tonsured one of Brighid,” could be either a pagan or a Christian name. While the Giolla names are always held by men, Mael names were used by both men and women.

Some pagans and heathens might feel uncomfortable with names of this type, since they imply outright service to the deity. Yet our pagan ancestors went much further than that, with names such as Mog Nuadat — Slave of Nuada — and Mug Ruith, which means Slave of the Wheel (referring to a device with which Mug Ruith performed his magic). This name pattern was continued into the Christian era with names such as the Welsh Gwas Dwyw, Slave of God, and Gwas Sanffred, Slave of St. Brigid, but there is no question of this pattern being Christian in origin. Mog Nuadat was a warrior king of the pagan era and Mug Ruith was an especially powerful druid specializing in war magic. If some of the most powerful people in ancient Celtic society described themselves as the “slaves” of a god, we should ask ourselves why — and the explanation can only be a spiritual one. We’ll explore the implications of these names in Part 3. 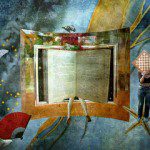 January 30, 2013
Druid Thoughts: The Influence of Story
Next Post 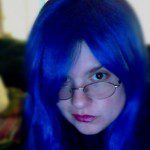 February 1, 2013 The Road From Hate To Understanding
Recent Comments
0 | Leave a Comment
"Could this come from the ancient art of Ogam. Druids would use trees and how ..."
Shanette Strizek Oak, Ash, and Thorn: the Evolution ..."
"It wasn't until I began to practice a higher form of Witchcraft known as Ceremonial ..."
Brenda Keitt The Balancing Path: Scientifically Minded Witchcraft
"Do you believe that people should be allowed to say and do whatever they want ..."
MrFribbles Beyond Binary Witchcraft: In Praise of ..."
"Several people have been 'cancelled' and their career has been ruined in the last few ..."
BrainSync Beyond Binary Witchcraft: In Praise of ..."
Browse Our Archives
get the latest from
Agora
Sign up for our newsletter
POPULAR AT PATHEOS Pagan
1