Loop of Brighid: The Brig – Divine Energy of Creation

In “The Second Battle of Moytura,” Brighid Herself is simply referred to as “Bríg.” This word means “power” or “height,” and can refer to high places such as hilltops or to heightened mental states such as artistic inspiration. Names with the “brig” sound in them can be translated as “The High One” or “The Exalted One.”

During the Celtic Iron Age, chieftains often governed from hill-forts, which became towns and even small cities in some cases. Blacksmiths and other craftsmen had shops located within the hill-fort walls, which also contained the tribe’s religious sanctuary. The sanctuary or “nemeton” would often be located at the top of the hill, right in the center of the fortified enclosure. This could have led to an association between the top of a hill, the concept of sacred power, and the goddess who personified human culture and its manifestations such as blacksmithing. 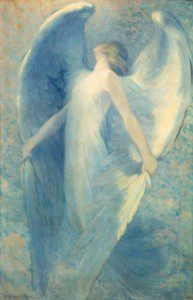 Gaelic lore includes several figures described as human women but given names beginning with “Brig.” “Brig” in this context means “Power,” and these names always indicate what the woman in question is the power of. It is unclear if these “brig-names” were originally just epithets of the goddess Brighid, or if the women bearing these names were thought of as avatars or incarnations of some aspect of the goddess.

However, if we think of “Brig” as a word for Power, we can see the potential for a theology similar to Shaktism, the goddess-centered branch of Hinduism. In the Shakta religion all power, in whatever form, is a manifestation of Shakti, the divine energy of creation. Shakti is not feminine in an absolute sense, but can be conceived of as a feminine energy from our finite perspective.

If we want to restrict ourselves to what can be proven about the past, we would be limited to pointing out similarities, connections and possibilities — but theology is not necessarily bound by history. We can take the available facts as seeds and then see how they grow.

Personally, I see the ultimate divine reality as being a power beyond all qualities, attributes or comprehension, a power that spontaneously generates or emanates universes and realities out of itself. This process or energy of spontaneous creative output can be thought of as “Brig,” or the power of creation.

Brig is beyond all categories such as gender, but can be thought of as a feminine divine energy due to its quality of giving birth to things. Brig can also manifest as specific goddesses with personalities, characteristics and powers.

Because Brig is the primal creative energy of the universe, Brig is inherent in all phenomena of any kind. However, the specific goddess who most directly manifests the quality of Brig is Brighid in Her broadest and most universal sense. Brighid is “the goddess of Brig.”

This “Universal Brighid” has manifested on Earth in multiple different forms, some of which have “brig” in their names while some don’t. The goddesses of the “Celtic Minerva” type could be seen as the “Brighid family” of Celtic goddesses, but broadly speaking the Brig is the Divine Feminine itself and all goddesses are manifestations of it.

For those who are drawn to the goddess Brighid, this theology allows us to approach Her on more than one level at the same time if we so choose. We can see Her as a specific Irish goddess, as a pan-Celtic family of goddesses with overlapping functions, as the concept of Goddess in the broadest sense, and as the ultimate divine reality in personalized form.

These levels are not mutually exclusive — there’s no need to distinguish between a “hard polytheist” and “soft polytheist” interpretation. By mentally shifting between different levels depending on the context, we can relate to Brighid as a specific divine being with whom we can have a close personal relationship — or as a way of approaching the ground of all being.

Of course, that doesn’t mean that this particular way to approach the divine is somehow more true than other ways- you can’t build a fence around the infinite. Just because the primordial creative power of the universe can be thought of as Brig, that doesn’t mean there aren’t countless other valid ways to think of it.

However, modern pagans have been so averse to anything resembling dogma that some of us tend to shy away from theological thought entirely. We really don’t need this limitation. You often hear pagans say that our religions are defined more by practice than by ideas, but there are some practices you can’t even access without engaging the ideas that make them possible. If we refuse to engage with theology, we also limit our practice. So, for followers of Brighid, this concept of Brig as a universal creative power is a way to start to see Brighid in everything — a way to see everything in the universe as Her divine fire. 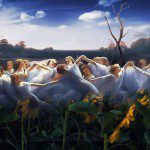