“When I was a boy and I would see scary things in the news, my mother would say to me, “Look for the helpers. You will always find people who are helping.”

When something awful happens, we have a choice.

I choose the second thing.

By focusing on the helpful people, we increase the amount of love in the world. Every positive thought and compassionate act is a step towards moving society from the darkness to the light.

Andrew Smith, one of the astrologers whose blog posts I read, had this to say in a recent article for Positive Life magazine:

Gregg Braden talks about the measurable effect on humanity of group intention in his book The Divine Matrix. Essentially, he refers to research undertaken that suggests it only takes the square root of point one percentage of the population to transform the world by intention alone. Think about that in terms of Ireland – that is a mere 223 people needed to embody the cosmic energy and kick start the paradigm shift. 223!

(I am choosing to ignore the corollary thought that if it takes just a small number of people to raise vibration, then a similarly small number also could drag it down. Let’s be positive, please.)

We all have a choice, every day, to make a little magic—to change consciousness at will. And to make that change a positive one.

Many people who read this Web site volunteer. I bet more than 558.  Maybe they volunteer with their church, or with other organizations. Or, perhaps they simply try to interact with joy and compassion as the opportunity presents itself.

I try to do this every day. I live in a city. I often see people asking for spare change, or for money, at traffic intersections. Unless I have absolutely no money with me, I give something. I do more than give. I look at the person directly, squeeze his or her hands, and give them a blessing. I let them know I see them as a fellow human being, worthy of respect. The flow of compassion blesses us both.

Any positive act or intention changes us, changes those to whom it is directed, and changes the world. Think of the story of the Oakland Buddha. In 2009, Dan and Lu Stevenson got tired of the graffiti and garbage in their neighborhood. They decided to install a small garden Buddha to shift the energy. And it did.

The graffiti was painted over and did not come back. No garbage was dumped. People planted flowers, lit candles, left offerings, stopped to meditate and pray.

And when one person’s complaint almost led to the city of Oakland removing the Buddha, the neighborhood rallied and the Buddha was allowed to remain.

The Oakland Buddha is a candle. The efforts of all those who ran forward to help after the Boston Marathon bombing are candles. My friends who volunteer with homeless animals, homeless humans, the hungry, those stricken by natural disasters, all are candles. So many good deeds shining forth, so many candles lit against the darkness.

We all have a choice: light a candle, or curse the darkness.

I’ll reach for that candle, every time. 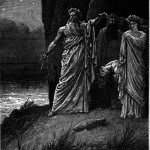 April 22, 2013 Seekers and Guides: The Merits and Flaws of Self-Guiding
Recent Comments
0 | Leave a Comment
Browse Our Archives
get the latest from
Agora
Sign up for our newsletter
POPULAR AT PATHEOS Pagan
1