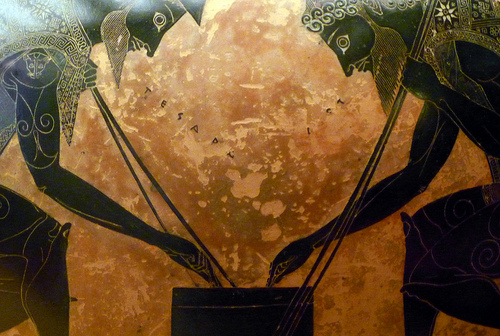 This series on the history of ancient naturalism began with an overview that tipped my hand: I think naturalism emerged first in Classical Greece.*  So, what was so special about the Greeks?  Was their archaic culture (roughly 800 – 480 BCE) already inherently pregnant with the idea of naturalism?

For the most part, archaic Greeks were like the others in their region.  But historical circumstances allowed them to stand on the shoulders of their neighbors while adding aspects of their own culture conducive to naturalism.  This post will discuss the circumstances that would eventually allow naturalism to sprout.

The contributions of other cultures 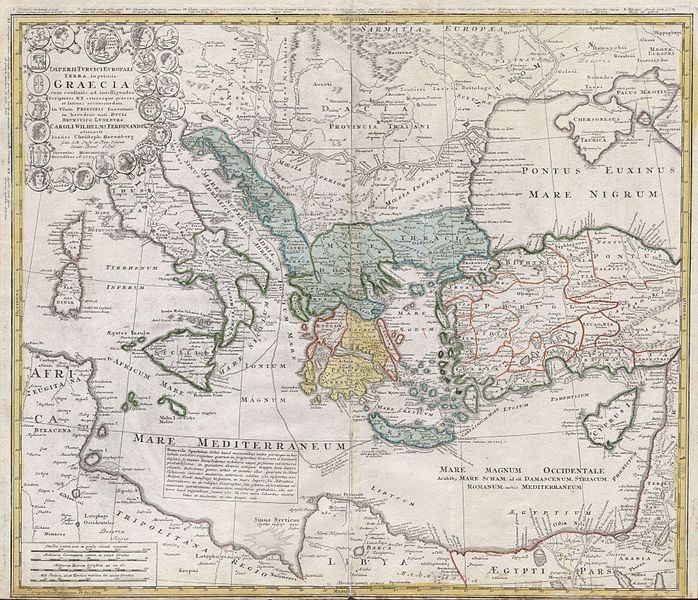 This series has painstakingly investigated the development of key foundations of naturalism.

First, doubt of mainstream ideas, which was likely around even among early hunter-gatherers, opened a field where alternative conceptions could take root.

Second, the development of elaborated, shared worldviews may possibly have appeared among early agriculturalists, establishing the environment necessary for a systematic worldview like naturalism to flourish.

Finally, archaic civilizations, exemplified by Egypt and Mesopotamia but including cultures as far flung as Polynesia and Mesoamerica, nourished the soil.  Mathematics and astronomy, as well as political law, developed abstract thought further than ever before, making possible the idea of an impersonal, law-like nature.  Moreover, tools enabling extended reflection, such as writing, allowed information to be reorganized, extended, elaborated, and critiqued in new ways.

Greece was ideally positioned to absorb the ideas of these cultures without being dominated by them (Bellah, 2011).  It was situated on the frontiers of the civilized world, close enough for trade but far enough to avoid conquest.  The Greeks had just climbed their way out of a dark age; they were experimenting with new political and economic strategies, which showed they had developed an outlook at least somewhat open to change.  The memories of their civilized Mycenaean ancestors were present in their minds, as revealed in Homer’s Iliad, yet they were not beholden to them.  The inertia of milennia-old traditions, which might have held back their neighbors’ rate of change, was not a major obstacle for them.  For these reasons, Greece was able to stand on the shoulders of their neighbors and gaze in new directions.

The contributions of archaic Greek culture

While it was other civilizations that laid the crucial building blocks, Greece itself offered a few particular advantages.  None of them were unique to Greece, but together they created a land ripe for the rise of naturalism.

One was its concept of physis, or “nature.”  This was not yet a concept of generalized nature in archaic Greece.  It is first attested in Book 10 of Homer’s Odyssey, where the god Hermes instructs Odysseus on the “nature” of the moly plant.  There is much controversy about precisely what this “nature” meant at the time, but it seems most likely to regard a thing’s origin and inherent pattern of development (Naddaf, 2005).  What is noteworthy about this is the recognition that natural things have in them a generative energy of their own; they need no outside will, divine or otherwise, to come into being.  While this view of natural things is probably not unique to Greece, it certainly was conducive to naturalism.  In later times, it would lead Greek philosophers to wonder how the universe itself might come into being and develop of its own accord.

Another Greek advantage was a certain propensity to look for rational order in apparent chaos.  Hesiod’s Theogony is an attempt to arrange all the varied mythological traditions into a sensible structure.  If you read Kerenyi’s Gods of the Greeks (1980), you get a feel for the bewildering super-abundance of mutually-contradictory myths in play at the time.  Place this in contrast to the Theogony, and the significance of Hesiod’s revolution becomes clear.  All deities are placed into a logical familial structure, tracing descent from one generation to the next.

This seems to display a sort of cognitive need for order, in the poet if not also in the audience that appreciated his poem.  There is a feeling that anticipates the later Greek concept of kosmos.  In archaic times, this word referred to “orderly arrangement” or “ornament”, especially that of troops on the battlefield (Liddell and Scott, 1940).  Later, philosophers would use it to connote the orderly arrangement of the universe.  Already in Hesiod, it is hard to ignore such deep appreciation for order.

In all of this, I don’t want to over-play the rational card, for the Greeks certainly also had a penchant for the irrational (Dodds, 1951).  Some speculate that this too, paradoxically, may have aided the development of new ideas.  The cult of Dionysos, with its reversal and transgression of social norms, may have helped the Greeks to imagine alternative social arrangements and hence new ideas (Connor, 1996).

Finally, the particular relationship of the Greeks to their gods and texts was noteworthy.  To illustrate this, it will be useful to strike a contrast with their contemporaries in Israel.  Jews at the time imagined, first, a loving relationship with deity (“Thou shalt love thy God”), and second, divine authority for their scriptures (Bellah, 2011).  The Greeks, on the other hand, were more concerned with divine justice than love.  In a later era, Aristotle would remark “For it would be strange for one to say that he loved Zeus”, yet he would find nothing “strange” about Zeus’ justice (Bellah, 2011).  Regarding scripture, the Greeks had texts they considered divinely inspired but also unreliable.  Hesiod’s Theogony claims to be inspired, but also says that the Muses lie (Athanassakis, 2004).  Thus, the individual had to exercise his or her own critical powers to determine truth.  This particular relationship to deity and text conduced to an outlook that may have been somewhat more impersonal and inquisitive that that of their neighbors.

Were the archaic Greeks naturalistic?

Considering these advantages, would it be fair to call the Greeks of this time period naturalistic?

The answer to that is no.  Naturalism, as we’re defining it in this series, refers to a worldview that finds all primary causes in nature (Furst and Skrine, 1971), and understands nature as characterized by impersonal physical laws.  The Greeks of the archaic period were poised for this breakthrough, but had not yet made it.

This may seem odd, considering that abstract principles were readily deified, such as Love, Justice, and various forces of nature.  This might seem to indicate that their gods were symbolic rather than personalistic.  Yet this would be a hasty conclusion:

…all Greeks knew that Aphrodite was a power within themselves as well as a goddess on Olympus; the allegorists who identified Athena with “mind” or “reason” were only picking up on a very manifest trait of the goddess in myth.  (Parker, 2011)

In other words, if some understood deities as symbolic, they were following a well-established tradition; deities could be symbols at the same time as real beings in the most literal sense.  To put it more plainly, all Greeks knew the gods had symbolic meanings; it was not till later that some went a step further by considering them wholly symbolic.

Despite the Greeks’ occasional symbolic interpretations of deities, concept of physis, and appreciation for order, their understanding of nature was still very much characterized by the personal wills of deities as well as the magical manipulations of people.

Above all, gods were approached in cult as beings with whom interaction in the human terms of reciprocity and gift exchange was possible.  (Parker, 2011, p. 95)

This interaction meant that the course of natural events could be manipulated by people making offerings to deities in order to gain a favorable outcome in exchange.  This was not, of course, the sum total of archaic Greek religion, but it was an undeniable part of it.  Moreover, we have no evidence from this time period of anyone denying the efficacy of such interaction.  So, in contrast to an impersonal nature where events unfold according to abstract laws, the Greeks of this time period perceived nature as preeminently personal, with a flow of events that was open to persuasion.

So, if archaic Greece was not naturalistic, was it inherently pregant with naturalism?

I don’t think that would be true either.  Although the advantages of the Greeks were significant, they were not unique.  The biggest factor was being in the right place at the right time to absorb the achievements of other civilizations without being dominated by their traditions.

Nevertheless, naturalism would arise in Greece, and very soon.  In fact, toward the end of the archaic period one group of Greeks came very close indeed.

Pythagoras lived at the end of the archaic period (570 – 495 BCE).  He was reportedly the first to apply the term kosmos to nature as a whole, or perhaps only to the heavens.  Absorbing the mathematics and astronomy of earlier civilizations, the Pythagoreans were said to have conceived of a universe essentially characterized by numerical relationships – i.e. impersonal, abstract laws.  This would come very close to a naturalistic concept of nature characterized by impersonal physical laws.

Unfortunately, the actual beliefs of Pythagoras and his followers are shrouded in mystery.  Ancient sources are mixed on this point, and there is reason to believe much of it is mis-attributed (Huffman, 2011).

In any case, even if all the reports were true, their view of nature would still not have been naturalistic, because it was decidedly not physical.  Dualism might be too strong a word, but Pythagoreans believed in a soul of some kind that could undergo metempsychosis, or transmigration, living life after life in various animal forms. This places them outside naturalism, though their thought would deeply influence later naturalistic thinkers.

If the Pythagoreans achieved two parts of a naturalistic concept of nature, namely impersonalism and natural law, they did not quite obtain the third, that of a physical nature.  Nevertheless, it can be said that they came closer to naturalism than any tradition before them.

*Greek naturalism might have been predated by that of India.  Due to difficulties in dating, it is hard to say with confidence which culture was first.  China, too, developed naturalism, though probably somewhat later than Greece and India. 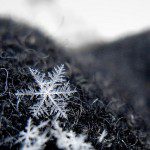 September 27, 2013
Syncretic Electric: Looking at our History (Part 4) - Egocentrism and our Future
Next Post 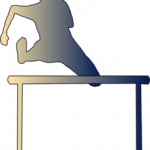 September 30, 2013 Seekers and Guides: Obstacles to Learning
Recent Comments
5 Comments | Leave a Comment
"Great insights, Martha. You know that with my agnostic leanings I have a different concept ..."
Willow Rose The Corner Crone: Hekate of the ..."
"A sincere thank you for sharing this. I so appreciate the opportunity to understand others's ..."
Willow Rose Between Two Worlds: Anna, Another Lesson ..."
"I always enjoy your thoughtful insights."
Willow Rose Between Two Worlds: Reminiscing and Moving ..."
"A necessary message, beautifully composed. Thank you for sharing of yourself, Martha."
Laurie The Corner Crone: Self-Love Will Be ..."
Browse Our Archives
Related posts from Agora