Heathen Woman: Patron Gods and the Pledging of Ourselves

Heathen Woman: Patron Gods and the Pledging of Ourselves May 30, 2014 Heather O'Brien

There has been a lot of discussion lately about choosing a patron god in heathenry and whether doing so is of spiritual importance. Personally, I think: to each their own. Spirituality, after all, is individualistic. If, however, the decision to choose a patron comes at the expense of excluding the other gods, then it becomes a practice that ignores the premise behind a polytheistic faith. This isn’t to say that all people who choose a patron deity ignore the rest of their chosen pantheon; it’s merely a word of caution to make sure the rest of the gods still have their worth appreciated with vital enthusiasm.

I understand the desire to reach out to the gods and want them to reach back. Sometimes, however, this notion of selecting only one seems to be a byproduct of the monotheism that many people were raised with, either by societal standards or through familial religious convictions. For a long time now, a singular omnipotent presence that can identify with us on a personal level has been considered the norm. And for many people, this is a comforting point of faith, one that’s central to most mainstream religions.

There are some basic historical tenants that provide a foundation for heathenry. Primarily, this includes the tradition of blót and symbel, reverence for the gods, caring for the land, paying respect to the wights, and honoring our ancestors. In addition to those, we try to understand how heathen peoples lived by studying their rites and their system of gifting and honor, as well as what it means to live a life according to ancient tradition. Through the understanding of these elements, we gain insight into the heathen view of the gods, and we’re given a window of how the Northern people pledged themselves to their way of life.

In ancient custom, when a person devoted themselves to a Lord, they did not yet have experience that necessarily put them at the head of the table as an honorable person. That was something that was earned over time in a relationship established on integrity and renown, built through proven deeds. Concepts like luck and fate were strongly considered. Choices were made with deliberate intent that was for the betterment of the tribe. The gods and goddesses were powerful presences of awareness and intervention who had their own battles and concerns, some of which would mingle with human lives – especially where agriculture, prosperity, seafaring, fertility, success in battle, and healing of illnesses were concerned. (Examples of these interventions abound in the Eddas, where a god is sought after and then responds, such as Ríg coming to Midgard to create the classes of humanity.) In each of these areas, the gods were given a reverent place that acknowledged their attributes and significance. Kings were said to have held the luck of the tribe while maintaining a close connection with the gods, and the gods were viewed as directly affecting the lives of people. Further aid from the gods was sought through the offering of sacrifices and upholding of traditions. The actual divinity of the gods was seen as sacred, however, and as something that existed outside of what a human being was able to accomplish by their own will.

Scholarship has helped to uncover the established traditions, beliefs, and practices of the ancient heathen people, and we are still in the process of studying it. But no matter how much is uncovered–which hasn’t been lot–there will still be holes left in what we know of their spiritual experiences. We can reasonably attest to the larger cults dedicated to Odin, Freyr, and Thor, but it’s likely that there were other groups just as dedicated to lesser known regional or tribal deities, such as Nehalennia. Much of that history may have been passed orally, and so finding much more than what we already have is a far-fetched wish. We must aim to preserve what we’ve been given thus far by dedicating ourselves to the ancients’ spiritual framework.

In recognizing and honoring the gods, the ideal is to remain inclusive of the roles that all of the deities play in our lives. Heathens blót often to a certain god or goddess, but are also intentional in continuing to honor the other gods, the Dísir, and the wights of the land. Heathen traditions should be studied and accounted for through the use of historical findings while also recognizing that spirituality is an individual, organic, and evolving process. There is no “one size fits all” where spiritual development is concerned, so the goal is to incorporate our spiritual awareness into heathen tradition. Our appreciation of all the roles that our gods play should continue to grow, regardless of whether we choose a patron god or not. Certainly, there are aspects of particular gods and goddesses that may be especially appealing to individuals, and requesting aid from a particular deity is common. However, gods are not confined to placating our passing mundane desires — which is something to keep in mind when communicating with them. Gods exist in a larger capacity that may be outside our realm of understanding.

Our pledge to our ancestors, and our pledge to heathenry, involves searching for truths and incorporating them into our lives honestly and mindfully. It is in these ways that we pledge ourselves, through deed and the pursuit of truth, and honor the heathen gods in a way that includes them all. 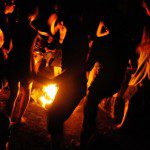 June 2, 2014 Birthing Hereditary Witchcraft: Family Coven Can Be Enough
Recent Comments
0 | Leave a Comment
"I wrote a poem to describe my life at this time called "Earthquake Factory". Not ..."
Amanda Ingalls Simple Witchery: At The Crossroads of ..."
"Thank you for writing it! It's a terrific resource for our community!"
Martha Kirby Capo The Corner Crone: Elemental Witchcraft Review
"Thank you so much for reviewing Elemental Witchcraft! Your insights and feedback are very valuable ..."
Heron Michelle The Corner Crone: Elemental Witchcraft Review
"This sounds really interesting. Thanks. I love witchy book reviews. Books are always a wonderful ..."
WildestSea The Corner Crone: The Hedgewitch’s Little ..."
Browse Our Archives
get the latest updates from
Agora
and the Patheos
Pagan
Channel
POPULAR AT PATHEOS Pagan
1