In reconstructing heathen practices, historical evidence (albeit sometimes limited) about ancient Northern traditions is paramount to today’s heathens. Through the surviving written accounts documenting heathen cultures, we are privy to information about how we can recreate heathenry in a way that is historically honest. However, this is sometimes done at the expense of the spirituality that was integral to the elder heathens – at times, almost entirely excluding the gods. Presumably, this is because spiritual experience cannot be scientifically or academically validated, and it therefore becomes an area that doesn’t receive a lot of modern discussion. Perhaps it is also because spiritual experience is highly individualistic, varied, and speculative, which makes it hard to quantify. While it’s vitally important to modern heathens to know how ancient traditions were practiced, exploring why those traditions were so important — in other words, examining the spiritual component — holds just as much relevance to understanding heathenry.

Why is examining ancient spirituality relevant when discussing the physical elements of reconstruction in heathenry? If we go through the motions of historically-based practice without actively communing with the gods, we become mere students of anthropology instead of engaged people of heathen beliefs and practice. Further, we lose the less tangible connections to the gods that have nothing to do with a limited physical self. We can build a Ve, construct a hof, and have the best-looking sacred hedge on the block – but if those are constructed with nothing more than historical recreation in mind, those practices fall short of their original purpose for ancient people, which was an attempt at spiritual connection to the gods.

This purpose is referenced in the saga of Hakon the Good, which contains a fairly complete description of a sacrifice and blót. Not only are we able to reasonably reconstruct a blót outline from that saga, but we are also given the spiritual reasoning for it. As the cup is filled in that particular blót, the names of Odin, Thor, and Frey are called upon to aid the community. The people described as taking part in the blót in the saga of Hakon the Good are portrayed as reaching out to authorities that lay outside of the casual physical realm. Similar instances can be found in other sagas as well. In rites of passage for modern heathens, specific gods and goddesses are still called upon for protection and prosperity. This demonstrates a system of belief in heathenry that has carried over from ancient days. Science may now be able to explain many things that were once attributed to the powers of the gods, but one thing it cannot do is invalidate belief in that which lies outside of ourselves. Without spiritual belief, all that is left is a half-hearted recognition of the gods that does not acknowledge their significance. Maintaining spiritual health, and ensuring that spirituality is part of our practice, is vital to a comprehensive approach to heathenry.

If we look further in the Lore, we can see how spirituality is explored – even by the gods. In the Nine Herbs Charm, found in the Lacnunga manuscript, Odin is called upon for aid in healing. Additionally, in a shamanic role, Odin reaches into a void and brings forth the runes, which are a representation of divine mysteries. We see two ideas about the spiritual in the physical world here. One is that spirituality is an energetic force requiring the focus of individual belief. Had Odin not trusted there was something of value that lay just out of reach, then he wouldn’t have taken the initiatory nine-night journey to recover the runes. Odin’s commitment to pursuing the quest for the runes suggests that ancient Norse concepts included spiritual exploration outside of what can be physically proven. Ancient heathens were clearly a people who were concerned not just with a good harvest or victory in warfare, but also with the sacred. Their traditions incorporated practices demonstrating their trust in the gods; for example, runes carved on stones and weapons were thought to imbue objects with the power of the gods (which we also see in the consumption of the meat of sacrificed animals and other practices during a blót).

In Germania, Tacitus describes three classes of humanity that were thought by the ancients to have been descendents of Mannus, a chief deity. We can logically conclude, through historical context, that the ancient heathens felt there was a deep connection between human beings and the gods. Tacitus also references the spiritual power thought to be held by women in Histories: “[…] by ancient usage the Germans attributed to many of their women prophetic powers and, as the superstition grew in strength, even actual divinity.” Though years may passed since that time, we are no less human than the ancients, and our trust in and communication with the gods is no less important.

We cannot always identify what is sacred by documented historical tradition alone. To fully appreciate heathenry, we must engage both history and spirituality to develop heathen ideals and practices. 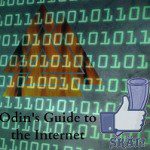 June 12, 2014
Wyrd Words: Practical Advice from the Hávamál (Part 3) - Odin's Guide to the Internet
Next Post