Around 11,000 years ago — six millennia before Stonehenge was built or writing was invented — people started coming to the site known as Gobekli Tepe (“Belly Hill”) in what is now southeastern Turkey to erect a 25 acre complex of stone circles. It’s the earliest known human-made place of worship, constructed by our gatherer-hunter nomadic ancestors. What sort of rituals they performed there, what their notion of the divine was, we don’t know and may never understand for sure. But it may be the case that pilgrimages to this site, and the massive effort to coordinate the building and to feed the pilgrims, set the stage for the Neolithic revolution and the dawn of civilization. [Curry; Scaham; Schmidt]

People did not live long-term at Gobekli Tepe, they traveled there for whatever sort of rites were done, and it’s interesting to think that pilgrimage, travel for religious reasons, seems to predate civilization. In order to make spiritual progress, we have to keep shaking up our neurological patterns, and from the Islamic Haj to Zen monks wandering like “clouds and water” (unsui), travel is an excellent way to do that.

And it strikes me that the circuit of summer Pagan festivals provides something along this line. Pilgrims come from hundreds, even thousands, of miles to places like to Ramblewood and Wisteria to form periodic communities, temporary autonomous zones that appear, disperse, and reappear. The idea also applies in some degree to Burner events (Burning Man and the official and unofficial “regional” Burns) and even annual music festivals — and the emergence of music festivals that deliberately include some aspect of consciousness-raising is an interesting development — but I’d like to stick with festivals that identify as “Pagan” or “Pantheist” or “Magical” in some way here; specifically my “home event”, the Free Spirit Gathering, from which I’ve just returned.

I’ve been involved with FSG since 1998, in roles ranging from kitchen help to President of the Free Spirit Alliance, the 501(c)3 corporation that produces the event each year. So I can’t offer anything like an unbiased review. What follows are some personal musings and a bit of a look behind the scenes. 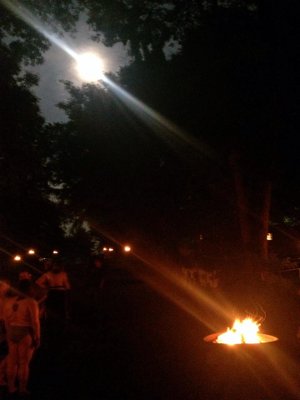 FSG takes place each year in mid-June (this year it was June 10-15) at Ramblewood, a private campground about an hour north of Baltimore. It’s my experience that one’s time at a festival like this can be anything from a deep magical transformation to a raucous party — sometimes both. For me, this year’s event was something like a physical therapy session: difficult, painful at times, but strengthening. For others I spoke to it was a time of breakthroughs and firsts, such as the woman who performed in public for the first time at our Bardic Circle. Some came with longtime romantic partners and deepened their connection, others made new…friends…during the festival. Children were welcomed to their first Gathering, while one man confided in me that liver cancer might make this his last one. (May the Fates be kind and make it not be so.)

I repeated my role as Master of Ceremonies for the festival, a position for which I literally wrote my own job description last year, keeping the energy flowing between our large group rituals, our concerts, our Bardic Circle (like an open mic with a spiritual mission), and our nightly drumming and dancing Fire Circles. With the rainy weather it was the Fire Circles that took most of my focus, but with indefatigable folks working setup and a Fire Crew who can make anything burn regardless of the weather, we overcame all obstacles and once again made mankind’s oldest magic.

The theme for this year’s Gathering was “Home is Where the Hearth Is”, and so it seems appropriate that the images that stick in my mind from this one involve fire. Watching the firelight reflect in a rain puddle, drops falling almost in time with the drums; dozens of performers in a ring around a candle, a symbolic flame, at the Bardic Circle; or coming down to the remains of the fire Sunday morning after working magic until dawn, and finding a score of butterflies sitting on the ashes, basking in the warmth and energy.

It was hard work, but I’m proud to have been a part of putting on a great festival. And I learned some important lessons about leadership and trust. However, I’m looking forward to heading to the Starwood Festival in a few weeks, where I will not be responsible for anything other than teaching a few workshops!

The Presence of the Gods
John Beckett
Related posts from Agora