Alone In Her Presence: Halloween – Inviting the Secular 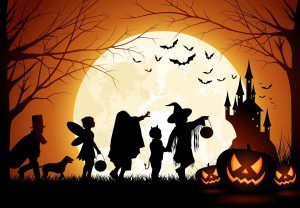 It’s that time of year again: a time when the veil between two worlds, the living and the crossed-over, is at the thinnest. This is a time many Pagans call Samhain, a sabbat to honor the death of the Horned God in his epic journey of death and rebirth. Many step into rituals that acknowledge the departed to commune and welcome the spirits of beloved dead. This month, many of the articles here at Patheos Pagan are focusing on honoring the beloved dead with the Ancestor Remembrance Project.  This is, after all, our most ‘high profile’ time.

Initially I thought that I might contribute to the project; however, I do not have ancestors I wish to remember or honor. I suppose Margot Adler might have been a source of inspiration, but that felt inauthentic as she and I met only once. The more I meditated on it, I came to feel a bit perplexed and annoyed that contemporary Paganism had this seemingly “one size fits all” application around Halloween. There is a belief proliferated by many that this is either a holy time or an evil time, but not all Pagans revere Halloween as holy. But I think all Pagans will agree, it certainly is not evil.

Personally, I like my Halloween with green faced ‘witches’ and candy corn, trick or treating and carved pumpkins. Oh, how I love candy corn and a jack-o-lantern! Sure, some of those items have folkloric history in pagan-based cultures, but I want to bob apples and throw lavish parties while eating candy corn till my stomach hurts (have I mentioned I LOVE candy corn?). Having grown up Evangelical Christian, I am not sure how how I managed to have Halloween as a kid. But it was the only time when the Ouija board could come out and not be looked upon as a “portal to Satan.” I can still hear my mother saying to my father, “It’s just a silly game!” My mother also loved Halloween, and I think this is why unlike other holidays, such as Christmas (she hated Christmas, due to the commercialization of forced gift giving and excess), we always had so much fun! It was for her a purely secular spectacle.

Once when I was in sixth grade, she threw me the most lavishly epic Halloween party. I have two memories from it. First, for one night I became the most popular kid in school. The other memory is my father following the one black friend I had like a shadow, making sure he didn’t steal anything. I am not sure he knew that I saw this, but I did. Subsequently, our house was robbed a few weeks later, and naturally my father let it be known that the ‘n**ger’ at the party must have been casing the house.

This is why I let the beloved dead stay dead. While my father is not dead, we have not spoken in probably 18 years. I have little connection to my family of birth, and this is by choice. For the handful of joyous memories, I have bushels of sorrowful ones. For myself and many others who have come into knowing the lap of the Goddess as a place of healing and sanctuary, the past was a place of great pain. There are no ancestors to honor in my long line of oppression and racism that proliferates both sides of my family tree. From chattel slave traders and owners, to merchant whalers, and more, in that past is history of known mental illness that destroyed generations with sexual trauma and near-psychotic obsessions with Jesus as “lord and savior.”

No, I think I will sit this one out. And here is why? Maya Angelou once said, “History despite wrenching can cannot be unlived, yet if faced with courage need not be lived again.”

In this perfectly imperfect moment it is okay to politely decline Ancestor Remembrance. That is not to say that I do not feel inspired by beautiful family altars I have seen or Day of the Dead celebrations in my neighborhood, I do. I love a great Dia de la Muertos altar; it is one of the benefits of living in a predominately Mexican neighborhood. But reading some of these articles have made me feel less than, like I am missing out on something when I am not.  Beyond the observation of others, honoring the beloved dead of ancestors past is simply not my truth. The same goes for honoring a Horned God’s death. I don’t worship a dying and rebirthing god. To be honest, the whole idea is for me is a bit too zombie Jesus. Again, not my truth. I do not align myself with an ancestral or bloodline magical path or tradition and honor the centuries of kinsman of a Reconstructionist religion. And that is okay. My path is an ever generating, every abundant, ever changing Holy Mother.

Rather, instead I honor Halloween as a secular holiday. I revel in the misinformation about it, and about what witchcraft is and isn’t. I watch, bemused, when Pagans defend their beliefs to Christians and when Christians denounce the holiday, or in the case of Kirk Cameron, try to reclaim Halloween from the “Satanist pagans.”  I don’t get involved in the discursive patterns that often arise when people try to defend “who they are.” I know who and what I am, everyone does…. The Goddess needs no introduction.

No, I’d rather watch babies get their first Halloween costume, and children get dressed up as princesses and vampires, or even better, dress as a haggard green faced monstrous wicked witch!!! I put on my cliche witches hat and give out copious amounts of candy: the good candy, because I have not forgotten the value of ‘good candy.’  I carve a pumpkin and make pie, and I watch Charlie Brown’s Halloween special… and if you forgot, I will also be eating candy corn!

This year on Halloween maybe I will light a candle for Margot Adler, and maybe go to a circle in NYC. But I may not be able to tear myself away from the secular of that day to invite the ‘holy’. And that is okay. The point of being in beloved community that nurtures truth is that we have the power to cultivate the present, and manifest the future. I will, however, light a candle as I do nightly for all the spirits who have crossed over, that their journeys be easeful and that they know deep peace. As with everything, when we cast the widest circle we invite a magic that is manifold in blessings. I invite you to do the same.

Now off to the store to buy candy!!! Happy Halloween! 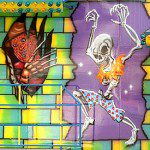 October 24, 2014 Queer of Swords: Halloween – The Secular Festival of Becoming
Recent Comments
0 | Leave a Comment
"Thanks for this. As someone who comes from a religion that had a lot of ..."
Kathy The DruWitch Way: What’s So Great ..."
"Just wanted to say thanks for the review of this, after reading it I went ..."
Crystalline Entity The Corner Crone: Sacred Gender (Review)
"What is bothersome about the world is the trust in medicine and providers. Skeptical beliefs ..."
Chas Dalton Hadrian’s Garden: Apollo & the Plague
"And there was a shooting at an LGBTQ club. We have a long way to ..."
Amanda Ingalls Between Two Worlds: Transgender Day of ..."
Browse Our Archives
Related posts from Agora