Queer of Swords: Halloween – The Secular Festival of Becoming

Some of you probably already knew that I’m British. We of the Old Country recognize Halloween, but it was never really a big thing for us. Remember, remember the Fifth of November. Gunpowder, Treason and Plot! For reasons that aren’t really well explained, bonfire night a few days later was really the event that collectively floated our boats. It possibly says something about us as a culture that we like to celebrate the anniversary of the day that Guy Fawkes in an act of terrorism almost but not quite blew up the Houses of Parliament, but I digress.

I moved to the United States a decade ago, originally just for the summer, then two years later it became permanent. The US and the UK have a lot of similarity – mostly the same language (give or take a few double letters and disagreement over what to call the access hatches at each end of a car), broadly similar values, summing to a way of life that is initially very familiar. I’d say that, at first, what amazed me was how much that was essentially the same, but after a little more time, it was the small differences that started to convince this particular Dorothy that she wasn’t in Kansas any longer. I remember being utterly bewildered the first time I attempted to buy bedding because the words for everything were entirely different. I’m not sure I ever managed to adequately come to terms with the concept of a pillow sham. What is a pillow sham, anyway?

Nothing, though, prepared me for the way that the entire United States becomes utterly unhinged one night of the year: Halloween. October 31st, the day that the veil is thinnest between being a fine, upstanding citizen and dressing like an undead tomato handing out vast quantities of chocolate to passing children.

As most people who have read my column for a while will already know, I’m open about being transgendered. It’s been about 20 years now since I started living in the gender that vaguely approximates my identity. Back in the 1990s as this was all happening, the rise of the internet gave me my first ever way to find community, information and support. This was the first time that I really started to spend a lot of time talking to Americans and realizing that there really was something different about Halloween for them. I talked to a surprising number of people who had their first ever experience of doing something about their gender nonconformance on that night – the only night of the year when the stigma of crossdressing wasn’t present. For some, this was a big deal. They would plan for months, putting together all the logistics for the big night, when they got to be themselves, with the only risk of being found out being a chance to win the best costume contest.

For many, this was extremely profound. Changing outward gender is a huge and scary thing, with no easy way to stick your toe in the water before committing. Halloween was that opportunity, cited by quite a few people as central to their decision to transition, or not transition.

My culture didn’t have anything like that. One kept a stiff upper lip, cor blimey strike a light. We never had an annual festival of becoming, that gave us permission to be someone else, some thing else, for a day. More importantly, for the transgendered among us, we never had the chance to become ourselves for a day.

We live in a world of self-appointed gatekeepers, whose permission we must seek in order to become ourselves. For the transgendered, this manifests as a tendency for medical professionals to set out their shingle as our lords and masters, the keepers of the keys to our gender identities. If you read the medical literature on the subject, particularly going back a few decades, you see some utterly bizarre and contradictory theories about our etiologies, all of which were supported by research based on interviews with transgendered people. The uncomfortable truth, if you happen to be transgendered, is that you have to make your own choice about transitioning and go with it. This involves lying your face off to any gatekeeper in earshot, telling them exactly what they need to hear in order to have them let you pass by unharmed. The consequence of this is that any gatekeeper with a pet theory will find any amount of corroborating evidence for that theory. We’re not stupid. We read your published papers and your books. We know exactly how high to jump when you say jump. This, of course, renders such gatekeeping largely useless, since it offers no real benefit to anyone, but still retains its intrinsic abusiveness. No one should ever have to petition for the right to become themselves.

I’m given to wonder whether the secret of the success of the American Halloween is really that it is a secular festival of becoming. Everyone likes a good excuse for a party, but there is something more here. My gut tells me that it’s not just the candy and the fake spider webs, fun that they are. It’s the permission. One night a year, Americans are allowed to get away with being themselves, however unhinged that might appear.

Well done, America. You did good with this one. 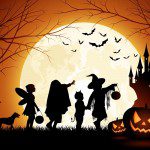 October 22, 2014
Alone In Her Presence: Halloween - Inviting the Secular
Next Post 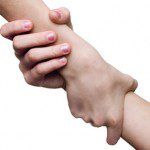 October 27, 2014 Seekers and Guides: The Downward Spiral – Depression and Suicide in Paganism (Part 4)
Recent Comments
0 | Leave a Comment
"Another post written by someone who hasn't actually read the mythology they are talking about ..."
Kris Hughes The Rantin’ Raven: Who Was Mabon?
"What has always worked for me -- e.g., with no negative blowback that I have ..."
Cathryn Meer Bauer Radical Pantheist: Defining Unethical Magic
"I feel like, with any craft, there are definitely rules. If you don't follow the ..."
JenniWest Cross and Crossroads: What “No Rules ..."
"She crossed the Rainbow Bridge early, but she will be waiting for you when you ..."
Kyllein MacKellerann " Stirring the Brew: Underworld Crossings
Browse Our Archives
get the latest updates from
Agora
and the Patheos
Pagan
Channel
POPULAR AT PATHEOS Pagan
1