The Zen Pagan: Santa Claus and the Nature of the Gods

The Zen Pagan: Santa Claus and the Nature of the Gods December 19, 2014 Tom Swiss

(A philosophical venture onto thin ice)

It’s once again that time of year when we are surrounded by images of the most successful American demigod. His priests are donning their red ritual vestments for the annual blessing of children. Stories from his mythos are featured on TV. Elementary school students across the nation are rehearsing songs about his bounty to be performed at “Winter Holiday” pageants that put a non-denominational veneer on a Christian holiday — a holiday that is itself a veneer on ancient Pagan celebrations of the solstice. And soon sacrifices of milk and cookies will be left out to curry favor with him.

Sophisticated cynics know that it’s a bunch of bunk, of course. There is no jolly old elf at the North Pole. There is no magic sleigh, no one coming down the chimney, and your parents are going to eat those cookies.

And yet…and yet…somehow, the gifts still end up under the tree. We tough-minded cynics and bah-humbugers still find ourselves softening up for a few days, a little more susceptible to break into a hearty ho-ho-ho or experience an unaccustomed warmth in the center of the chest, a bit more likely to find ourselves giving a damn about our fellow humanoids.

Even wars of imperialism have been known to pause for gift-giving and expressions of fellowship, to the great consternation of nationalists and warmongers.

To stop war, even briefly, takes more than a fictional character in a children’s story. There is a truth — an experiential truth, not a supernatural one — behind the myth. 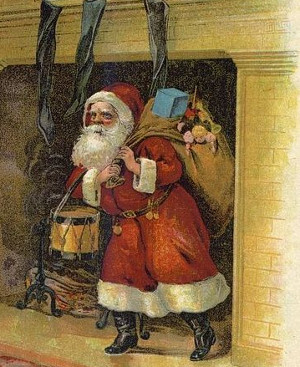 There is magic afoot here, something that changes consciousness and the world.

Santa Claus may not be “real” in the sense of a material substance immediately evident to our senses or measuring devices. But as an aspect of the human experience, he’s as real as a poem — say, “A Visit from St. Nicholas” — or as the number eight, as in “tiny rein-deer”.

There are millions of copies of “A Visit from St. Nicholas” which exist as material objects, ink on dead trees or magnetic or electrical patterns in computers. Yet none of these copies is the poem itself. Does this mean that the poem itself does not exist? Even the most positivist philosopher would make such a claim only in an academic debate, not in “real life”.

There are millions of mall Santas and parade Santas and Christmas garden Santas, yet none is Santa Claus. Does this mean that Santa himself does not exist?

Or does it mean that we’re looking in the wrong place?

As Francis Pharcellus Church of the New York Sun wrote in his famous 1897 reply to eight-year-old Virginia O’Hanlon,

Nobody sees Santa Claus, but that is no sign that there is no Santa Claus. The most real things in the world are those that neither children nor men can see. Did you ever see fairies dancing on the lawn? Of course not, but that’s no proof that they are not there. Nobody can conceive or imagine all the wonders there are unseen and unseeable in the world.

You may tear apart the baby’s rattle and see what makes the noise inside, but there is a veil covering the unseen world which not the strongest man, nor even the united strength of all the strongest men that ever lived, could tear apart. Only faith, fancy, poetry, love, romance, can push aside that curtain and view and picture the supernal beauty and glory beyond.

We could label Church’s reply as a lie, of course. We could declare ourselves a-Santaists and be done with it. But when Church wrote “Yes, VIRGINIA, there is a Santa Claus,” he was not operating in the context of the objective, material world.

He was not suggesting that a zoological expedition be mounted to the North Pole to capture those rare flying reindeer, or that experts in industrial efficiency be sent to bring Santa’s manufacturing methods to the factories of the United States. If he had, clearly he would be a liar or deeply confused, and a-Santaism would be the correct response.

But if we understand the realm in which Church was operating, a more sophisticated response is required — one which does not deny that material-realm a-Santaism but that is also capable of going beyond it.

And so ol’ Saint Nick actually makes a decent starting point for a deep consideration of the nature of the gods and goddesses. Are the deities real? Is Santa Claus real? The question can only be answered meaningfully when we agree on a context.

It’s interesting that Church makes reference to “fairies dancing on the lawn”. Recall that this was before the Cottingley Fairies, or Peter Pan’s Tinker Bell — a fairy so delicate that children’s skepticism could kill her. We’re dealing with a little bit older and more dangerous understanding of the fae folk here.

While there was a bit of a craze for paintings of fairies in the late 19th century, even the small butterfly-winged subjects of those paintings cavorted about scantly clad — or nude! — in stunning violation of Victorian convention. And perhaps we might think less of Tinker Bell and more of Puck of Kipling’s Puck of Pook’s Hill, a different sort of faery:

“Can you wonder that the People of the Hills don’t care to be confused with that painty-winged, wand-waving, sugar-and-shake-your-head set of impostors? Butterfly wings, indeed! I’ve seen Sir Huon and a troop of his people setting off from Tintagel Castle for Hy-Brasil in the teeth of a sou’-westerly gale, with the spray flying all over the Castle, and the Horses of the Hills wild with fright. Out they’d go in a lull, screaming like gulls, and back they’d be driven five good miles inland before they could come head to wind again. Butterfly-wings! It was Magic—Magic as black as Merlin could make it, and the whole sea was green fire and white foam with singing mermaids in it. And the Horses of the Hills picked their way from one wave to another by the lightning flashes! That was how it was in the old days!”

Looking forward to the new year, I’’ll be presenting at PantheaCon in February. But before that, if you’re still Yule shopping, Why Buddha Touched the Earth makes a great gift for the Zen Pagan on your list.

Finally, if you do Facebook, you might choose to join a group on “Zen Paganism” I’ve set up there. And don’t forget to “like” Patheos Pagan over there, too. 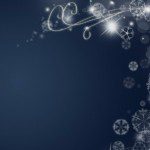 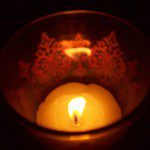 December 23, 2014 The Busy Witch: Winter Wind-Down
Recent Comments
0 | Leave a Comment
Browse Our Archives
get the latest updates from
Agora
and the Patheos
Pagan
Channel
POPULAR AT PATHEOS Pagan
1