Finding out that my book Family Coven: Birthing Hereditary Witchcraft should have a publication date soon, has caused me to go back and review some of the major movements in the book. One of the sections came up during which I was talking with a mother of four who had her two year old with us.

She had been raised as a “holiday Christian” but with a definite understanding that Christianity was the correct religious choice for her. Her two older children (teenagers) had been attending a local Christian church youth program and had recently asked to stop. It was the reason they wanted to stop going to church that caught my attention.

Although mom had been raised a moderate Christian, she had long ago parted with some of the Christian doctrines and ideals that she had been taught. She had encouraged her children to understand that gay, lesbian, transgendered, or other-gendered, people could love whomever they wanted. One of her children decided to self-identify as pan-gendered, and was less than pleased with the stance their church had taken about homosexuality and other-gendered identifications.

Mom easily shifted to this new need in her oldest and began to encourage her children to think outside the box of Christianity. She had recently done this herself, which had lead her to meeting me.  She thought the transition would be a natural one for her children, too. To her surprise, the oldest teen gave her this warning: “Mom, I think you are taking this Pagan thing a bit too fast, and I think you should slow down. After all, Pagans worship Satan, right!?!”

She was shocked and couldn’t understand how her child could believe this when they easily disregarded their church’s teachings about the LGBT community.

I was not surprised. The only way to ensure that a child doesn’t grow up to think other religions are “wrong” is to avoid presenting a “right” religion. Even if partnering parents both participate in the same religion, presenting that religious path as the “right” one can easily be done if no other path is ever presented.

My boy, TreeBear, was exposed to as many different types of religions as I could arrange. Our task was made easier due to my husband’s work. As an audio visual engineer, he creates large “praise, worship, and video production” systems for many different types of churches. From a young age, TreeBear was experiencing everything from African American Gospel churches, mainstream Christian churches, and even visited the only Catholic cathedral built in Atlanta in fifty years.

To ensure that he had a rounded experience spiritually, I took him to the Hindu Temple complex, and we talked at length with a priest there. Later, I would take him to a Jewish Synagogue and to some Buddhist monks who have a monastery in South Georgia.  Several times we drove to a temple where he could study Buddhism and work toward an understanding of the twenty-one virtues of Buddhism.  When he showed an interest in Thor, we turned to a local Asatruar to find out what boys his age could do and be taught about that faith.  He has participated in a sacred peace mandala ceremony at the Chattanooga River in Chattanooga, TN, and he has been to Pagan rituals of various origins and types.

Whenever he asked me what someone or some group or thinks or believes, if I didn’t know I went and found out. My goal throughout this process was to show him that what is best for him may not be best for everyone and that there are many ways to be spiritual.

The other thing I did, and continue to do, is to talk to TreeBear about what Christians who are in the mainstream typically believe and have introduced the idea that not all denominations are the same in Christianity. Episcopalians, on the whole, are tolerant if not welcoming of the LGBT community. However, the typical Baptist congregation may not be. We have talked about the Duggers, of 19 Kids and Counting fame, and about their Christianity, about what they believe and why. We have talked about the Great Commission and how that has influenced the growth of Christianity and the movement of missionaries in Christianity. He knows the history of the Mormon Church, and how the split of Catholics and protestants happened. We even talked about Jonestown and the Heaven’s Gate cults and about how these and other cults are founded.

Whether he wants it or not, the majority of people he will meet will have been indoctrinated in a Christianity of some type. To protect him, to protect his ability to choose his own belief system, he had to be educated regarding all systems.  This education will help protect TreeBear against indoctrination by outside groups or beliefs;  he’ll be able to make his own way.

Though the mother above had made sure to indoctrinate your children against homophobia, she forgot that this applies to all belief systems. Because her children lacked an understanding of the many different denominations and religious views, and by not thoroughly investigating the youth group, they fell prey to some of its message. Hopefully, she will now take the opportunity to go back and work on undoing some of that; perhaps, tarting with Paganism.

Birthing Hereditary Witchcraft is published occasionally on the Agora. Subscribe via RSS or e-mail! 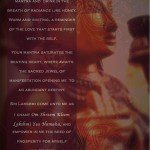 March 25, 2015
Alone In Her Presence: Turning In to Turn Back Out
Next Post

March 27, 2015 The Zen Pagan: The Politically Incorrect Pagan
Recent Comments
0 | Leave a Comment
Browse Our Archives
get the latest updates from
Agora
and the Patheos
Pagan
Channel
POPULAR AT PATHEOS Pagan
1

What It Means To Put Your...
John Beckett
Related posts from Agora