Socially Responsible Magic: How Scarcity shows up in Internal Work

In Scarcity by Sendhil Mullainathan and Eldar Shafir, the authors discuss the issue of scarcity and explain how it is a mindset or state of consciousness that people experience when they don’t have access to enough of something they need. For example, if you are hungry all the time, the focus of your thoughts will mostly be on food. The scarcity mentality can help a person manage a pressing need, but overall costs the person in terms of quality of life because their mental focus is primarily on the need they are trying to fulfill. Scarcity effects our decision making processes, because decisions are made in context to what is scarce.

I’ve been thinking about the scarcity mindset as it relates to doing internal work, because it occurs to me that internal work is done in part to address scarcity or perceived scarcity in one’s life. Scarcity shows up in many different forms. A person may not be in a state of hunger, and yet can still experience scarcity of some type that defines their behavior and choices. It seems to me that when you fixate on something obsessively, so that it becomes the predominant concern of your life, then everything else and everyone else around it is defined by what you fixate on. The scarcity of not having enough defines you and your interactions. Internal work, when done to address such an obsession, may not factor in that scarcity mindset, which could prove problematic in effectively resolving the issue.

In applying this mindset to some of the internal work I’ve done over the years, I’ve come to recognize how much that work has been motivated by a feeling of scarcity in my life that has existed for almost the entire span of my life (if not all of it). And, that’s just one form of scarcity. There have been others that have shown up at different points in my life and have contextually effected my decision making. I think that one of the problems that people have around scarcity is that they haven’t really been taught to think about it in a way that’s healthy. For the most part scarcity is considered something to be avoided, and yet ironically, I suspect there is no person that doesn’t experience some type of scarcity in their life. Obviously there are forms of it which are much worse than others, but in the refusal to actually accept and understand that scarcity is something that people do experience, I think a result is a lack of empathic awareness around scarcity. Instead many people do their best to avoid it and when they are reminded of it, such as when they see someone on a street corner with a sign asking for money, they may just look away and refuse to really be present with that person’s scarcity for fear that it’ll pass on to them or that they’ll come face to face with their own scarcity in a manner where it can’t be swept under the rug.

Books such as The Secret don’t deal with this issue either, because what they argue is that you attract the circumstances you are in, so if you’re feel scarcity in some area of your life it must be because you attracted it and wanted it. I don’t think any person wants the scarcity they are dealing with. It is a part of their lives, but not out of choice, so much as some need simply isn’t getting met and the lack of that need defines why they do what they do.

For internal work to address scarcity, a person necessarily must accept their own version of it and recognize how it effects their decisions and life. When they can see how much it shapes their life experiences, and truly be present with that, then perhaps there is an opportunity to work with it and ideally as a result become more accepting of others’ scarcity, so that instead of avoiding it, they actually face it and are motivated to do something beyond pretending that person on the side of the road doesn’t exist. In examining my own scarcity mindset and how it shows up in my life and also how I trick myself into not being present with it, I see how it has lead me to not acknowledging the scarcity I see around me. And I guess that makes sense in a weird kind of way, because you get so caught up in your own scarcity and however it manifests that it takes over your awareness of whatever else is around you. But if you can step back and actually acknowledge that you are experiencing scarcity of some type, then you can also become aware of what else you are avoiding.

I never looked at scarcity in relationship to how it showed up in my life or how my behavior and choices was shaped by it. I’m just starting the book, so I’m sure I’ll have further realizations, but in considering my own scarcity mindset and how my internal work has or hasn’t engaged it, I’m also looking at my relationship to scarcity in general and how I relate to people and their experiences with scarcity, which is a good step toward changing how I am present with it, or not as the case may be. 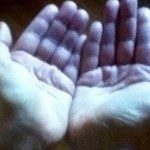 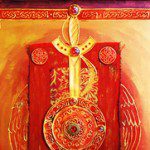