In my experience, wandering the worlds is a more pleasant and safe undertaking with trusted company along for the adventure. Many guides to trance journeying and astral travel, such as Trance-Portation: Learning to Navigate the Inner World by Diana Paxson, encourage connecting and working closely with a spirit guide or other supernatural ally who can help to both open and ward the way between worlds. I met my spirit ally in animal form several years ago during my early training with the Catskin Sisters, a group of women in Illinois studying Germanic religion and magic. In our heyday, we gathered monthly specifically to explore spirit work, the mysteries of spá and seiðr,and to honor the Powers with whom we’d formed strong ties.

We understood that a spirit ally was quite instrumental to the work that we’d begun. In Norse lore, the fylgja is a supernatural ally, in either human or animal form, who offers protection and guidance. In most situations the fylgja was perceived as preceding a person but under some circumstances, it would walk alongside a person. Also, it could be connected to individuals and/or to entire ancestral lines. According to Edred Thorsson in Runelore: The Magic, History, and Hidden Codes of the Runes, the fylgja was also a maker or breaker of one’s luck, a keeper of one’s deeds and related destiny. It is also sometimes conceptualized as a part of one’s soul, one’s divine self. To my thinking, these reflections on the nature of the fylgja are not mutually exclusive.

When I venture forth into the worlds I rarely leave this plane without my fylgja, a being often seen in Barn Owl form, as his aid has proven invaluable time and time again. He most commonly assists my otherworldly efforts by serving as guardian, guide, and messenger. Barn Owl also helps me with spiritual and magical workings that take place in this plane by serving as a consultant and an assistant.

First and foremost, Barn Owl guards me in my travels, identifying dangers before they become serious problems and offering solutions to help me navigate them. I can recall several instances, but the one that stands out in my mind was early in my trance journey practice. On a trip through the barren lands between two of the nine realms of the Germanic world tree, Yggdrasil, my fylgja warned me that the shadowy being I had encountered there was not what he appeared to be. Forewarned, I met the challenge the stranger presented and was able to move along my path. In another instance, a few years ago, I was wandering an astral woodland during Wild Hunt season. What was fair became foul rather quickly. Then, without so much as a signaling glance, Barn Owl grew in size and carried me away to a safer astral location. Barn Owl has an eye for danger and works diligently to help me slip out of the problematic situations that I sometimes slide into.

Barn Owl’s service as guardian is linked to his role as guide as well. He knows safer paths through many lands and sacred halls. With as much journeying as I do over the course of each year, it is good to know that even if I am not aware of the path, Barn Owl has a map and a few useful keys. Sometimes I have to ask and listen for his guidance but often he happily leads without a special invitation to do so. On many trips, he grows to a colossal size and I ride the worlds on his back. In this way he has guided me through the rich, golden fields of Vanaheim and through the sharp cold stones of Svartalfheim, and to many other realms too. As guide, from time to time he will quickly take me away to an undisclosed astral location because I need to see a particular spirit about one thing or another. In those moments, I am flustered, but I trust him. He knows the wyrd ways and he leads me well. For that, I am grateful.

His protection and guidance require trust and communication between us. We communicate clearly most of the time, but quality communication between the denizens of the Otherworlds and myself is also very important. Typically I have a direct line to the spirits that I need to speak to, but when I do not, Barn Owl will sometimes step in to convey a message, or he will simply boost and clarify the signal for me, making communication with spirits easier. My guess is that this works because his own nature is connected to both this world and the Otherworlds so he can shore up the communication network when it falter. Many things contribute to gaps in connection but often times it is a result of distraction on my part. When I am distracted it is hard for me to send or receive a “call” on direct lines, but with my fylgja’s help I eventually get the message and travel to where I need to be.

Beyond astral travel, I have found that Barn Owl is a great help in other spiritual and magical endeavors. For instance, psycho-transformative work is an important part of my spiritual practice. Waxing in knowledge and understanding of one’s self and then harnessing that knowledge and understanding to make essential changes to one’s psyche is critical to me. Barn Owl is a wonderful consultant and assistant in that work. He has a vantage point that I do not consciously have, and he readily shares what he sees through meditation and divination. Aside from psycho-transformation, I have called upon him for information gathering as well. In recent history I have sought his aid to learn more about a relative’s health, the whereabouts of several hard to find ley lines, and the preferred offerings for a particular god with whom I do not regularly work. In these things and more, my spirit ally’s assistance has been invaluable.

Over the years I have come to highly value my relationship with my fylgja. It’s important to me that I honor him often and well. As a way to cultivate right relationship between us, I make offerings of song, meat, beer, personal energy, and time spent together. I call to him and I also heed his calls to me. Our relationship is a rich and important part of my spiritual and magical practice and I hope to continue growing in knowledge of him and the myriad ways that we may work together in the future. 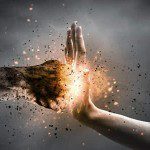 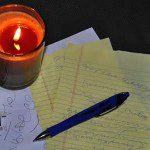 November 23, 2015 Star Made Witch: Automatic Writing
Recent Comments
0 | Leave a Comment
"Thank you for the encouragement."
Willow Rose Simple Witchery: Practicing Self Care When ..."
"I read 'Diary of a Witch' and 'the Complete Book of Witchcraft' as a teen. ..."
Brenda Keitt Irish-American Witchcraft: Top 5 Favorite Witchcraft ..."
"Thank you, The Gods choose who they wish to work with. For anyone to speak ..."
Lilith Azrael Andersen Being an Irish Pagan in America ..."
"Marian green, yasmine galenorn, starhawk."
Sam Irish-American Witchcraft: Top 5 Favorite Witchcraft ..."
Browse Our Archives
get the latest from
Agora
Sign up for our newsletter
POPULAR AT PATHEOS Pagan
1