Over the past thirty years or so, I’ve grown tired of what’s historically a Western mystery tradition and magical practice relying on Eastern practices and terminology. It’s not that the Eastern stuff doesn’t work; it does. But it isn’t ours. It’s borrowed, and in the borrowing it’s been changed and we’ve been changed. So I’ve evolved a set of different forms from Western European sources, to serve similar purposes. I make no claims of antiquity, traditionality or divine approval. I will say that they’ve worked very nicely for me.

Everybody loves a good monosyllabic chant. But I had gotten unhappy with “Om” because it’s actually specific to Hindu thought and in the West has been thoroughly new-age-ified, and stopped using it. I had some Egyptian sonics but they didn’t do the trick, being specific to the various phases of an Egyptian-style Ceremonial Magick ritual. Then I stumbled upon the syllable “Taw” in the Charles deLint novel “Moonheart.” He seemed to use it as an equivalent to ‘chi’ or ‘orgone’ but there was this certain frisson that said he was onto something magic. I got curious as to whether or not it was a real word and if so what it meant. Turns out that in Irish it means ‘me, my, mine’ and in Welsh it means “I am.” That had possibilities. Then a friend, who was a rune-master in addition to a Wiccan HP, created a bind-rune out of it that means “Standing in right relationship with the Gods, I am at one with the Universe.”  It seemed the perfect Wiccan energy-raising sonic and on experimenting with it, we found that it was pretty intense. You intone it, just as you would “Om” or any other one-syllable sonic, on a note that makes your belly vibrate. Be sure to clearly pronounce the ‘t’ and the ‘w.’

We shared our discovery a lot. By now everybody who’s done it with us is using it, because it works. A former covener of mine is now a Druid, and while at Druid Camp in England one summer he used it to do energy healing on a sprained ankle—the pain and swelling abated, the onlookers were suitably impressed, and so now we have British Druids intoning “Taw” and passing it on.  In another 10 years I’ve no doubt it’ll show up in some book as “one of the few genuine surviving practices of the ancient Druids” or some such baloney.

Anyone who’s meditated for any length of time has personal experience that energy travels up & down the spine. Chakra theory works fine to explain and work with it, and honestly, there’s really nothing in Western practice any better. But again, it’s just not ours, and I want to work with my culture’s patrimony as much as possible. Now, some Druid groups have a similar system, with centers up the spine which they call ‘cauldrons.’ I’m fairly literal-minded, though, and while I could cope with ‘chakra’ knowing it meant ‘wheel’ by visualizing it in the conventional way as a spinning vortex of energy, I just couldn’t visualize a half-dozen cauldrons swinging & banging off my spinal column without laughing. And then I hit upon physiology: these centers are nerve plexuses, physiologically speaking, so why not use the same word when speaking of their energetic functions as well? One of them is already called by that, the Solar Plexus. The thing the West has given to the rest of the world that has had the most positive influence has been scientific nomenclature. Why not claim it for spiritual purposes?

The same rune-master introduced me to the idea of Örlog (pronounced Urr-loag.) The word implies the working out of the fate of the life you’re in, not improving your status in the next one. Karma just doesn’t jibe with the way Witches think: We tend to be mavericks while it tends to enforce the status quo. You live your life by the rules and if you’ve done everything right you get to come back as a higher rank until you finally get to be a Brahmin, or step off the Wheel entirely. Örlog defies the status quo at every step, and it pays no heed to any life but this one. At the same time, it shares some of the concepts that make karma work for so many people: the necessity for right action, the idea that what you get is a direct consequence of what you put out, and the possibility of change for the better. Combining the concept of Örlog with the meaning of the Taw creates what could almost be considered a personal manifesto, bringing to life the Witches’ credo “As I will, so mote it be.”

A lot of Witches use the Lesser Banishing Ritual of the Pentagram, for the same reason they use “Om” – it works. It raises energy like nobody’s business. But I was uncomfortable with the male, monotheistic energy it draws. Then in the late 90s I was doing research for a public ritual that was to be performed in silence, and wanted gestures that would be as close as possible to self-evident; I wound up using mostly Native American sign-language out of the Boy Scout handbook with a little ASL thrown in, done with both hands at once. To my surprise, the resulting ‘pentagram exercise’ proved to be just what I had been looking for, an effective and graceful sequence that moves through the four elements and spirit, and resolves into the pentagram:

So here we have it, a collection of terms and a new ritual, perhaps a new way of thinking about some of our standard practices. Feel free to use them. I’d be delighted to hear what you think.

All images courtesy of Dana Corby. 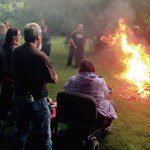 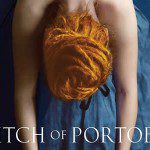 February 22, 2016 Star Made Witch: The Witch of Portobello (Book Review)
Recent Comments
0 | Leave a Comment
Browse Our Archives
get the latest updates from
Agora
and the Patheos
Pagan
Channel
POPULAR AT PATHEOS Pagan
1