The other day I read a blog by Stina Leicht called ‘The Dark Part of the Forest’ in which the author argued, concisely, for both the dangers of imbalance created by focusing only on the good, and also on the very real need for a renewed sense of enchantment. What struck me about this particular blog, enough that it stayed with me, was the fair and evenhanded approach the author took to the subject, and so I’ve found myself thinking about the issues the blog raised quite a bit.

My own spirituality is primarily focused on honoring the spirits of the Otherworld under a variety of names and guises so the idea of enchantment resonates strongly with me on several levels. Even among my fellow pagans and polytheists I often find a layer of cynicism that resists the idea of enchantment, of the possibility of childlike wonder that we might associate with enchantment. This isn’t so much a matter of belief because the belief is often there, but of a willingness to be open to engagement and experience; this is why I say its a bit childlike because children have us beat here – they don’t just believe it, they expect it. They don’t need validation or proof, but see the enchantment of the world like gravity or oxygen as a simple given aspect of reality. In contrast adults believe but only so far, only to a certain degree, and usually hinged on an expectation of the possibility of it being proven or shown to them. Enchantment isn’t something that, in my opinion, we simply wait to find like waders in a stream waiting for the water to carry something to us but rather it is something actively participated in. We are aware of the enchantment present in the world because our eyes are open to the possibility of it and we looking for it. Like trying to see a particular type of bird, it isn’t enough to know it lives in your area, you also have to keep your eyes open and your perception sharp to spot it. Enchantment is something to actively engage in, not passively experience.

I may notice this in particular because of what my main focus is, and the fact that whenever the subject of anything related to the “f” word (i.e. fairies) is mentioned I’m often surprised by the responses. In a group for Celtic pagans recently when the subject of the Fair Folk came up a member in Ireland expressed the opinion that they no longer existed, having been driven away or killed by people, for example. When I teach classes on the Otherworldly spirits people often ask how find them to connect to them, where to go – as if those spirits weren’t all around them, everywhere, even in people’s homes and in our very modern cities. And obviously people can think and believe as they choose, but to me this does speak of a lack of engagement with the enchantment of the world. Because I don’t think that its the world that’s less enchanted so much that people have lost the desire or will to be aware of what’s around them.

People slowly stopped seeing what’s there because many people have stopped allowing themselves to embrace the moments of true joy or to feel the moments of atavistic fear that exist in our world separate from humanity. People seek the middle road and reject what W. B. Yeats called the ‘unmixed emotions’ of the Gentry, or of children, and in doing so I think people lose that sense of wonder and enchantment. To reclaim it we have to be willing to experience life, to embrace the moments of enchantment when we find them – and once we know them perhaps we can learn how to make them for ourselves.

The other point raised by Leicht’s blog was about the importance of balance, in this case the value of twee.¹ I admit I had to really sit with this bit for a while because I actually, truly, hate twee. Partially because it is as close to antithetical to my own aesthetic as I think its possible to get; anyone who knows me knows I tend more towards what might be called the ‘dark’ end of the spectrum. And also partially because I have a lot of frustration about the amount of twee in modern Fairy beliefs and the way that view is changing and shaping many modern witches’ views of the Other Crowd into something different and foreign from the older beliefs. So I sat with the idea for a while and thought it over and was reminded of a message I had gotten in an aisling, a visionary experience, a little while ago. The gist of it was that even the fiercest wolf can be a good mother and even the most timid stag will turn and fight when his life is danger. There is, ultimately, no light without darkness, and no darkness without light, and all things need their opposite for balance. This is something I was aware of but I had never thought of it in the context of embracing the other end of the spectrum of my own beliefs, and I started to see the importance of this too. Even if twee isn’t for me – and honestly I may never like it – I can still acknowledge that it is important.

I realized that as much as I may dislike twee it does have its place, just as much as my own extreme other end of the spectrum does. If there’s a place for the macabre and the hard then there must also be a place, a need, for the overly sweet and soft. And I can’t argue for the need for the grim and bloody if I’m not willing to also acknowledge a place for the safe and delicate. After all nature needs both wolves and deer, and Fairy needs both sainly and unsainly – blessed and unblessed – because each serves an important purpose.

Just like the twee loving people and I balance out in some way, I think we each within ourselves have a bit of the other energy as well. I certainly see the value in joy and fun for their own sake, and I’d like to think that even the most light-hearted, happy, fairies-are-all-goodness sort of person sees the value in solemness and the necessity of endings as well. And both ends of the spectrum value enchantment – the enchantment of pure joy and the enchantment of shadowy dreams. Enchantment, after all, is the backbone of Fairy whether you like Light or Dark.

Wholeness is about balance, if not in practice at least in understanding, and in respecting the need for the entire spectrum. It is so easy to fall into thinking that only our own viewpoint has value, only our own belief is worthwhile, but we can’t vilify an entire end of the spectrum and not create repercussions. You can love light-hearted and joyous things – but don’t deny the importance and power of the dark and dangerous. You can love the dark and dangerous – but don’t deny the importance and power of light-hearted and joyous things. Finding Fairy is a tricky thing, but its impossible without a sense of enchantment, and perhaps just as impossible without an appreciation of both the sweet and the bitter, the dark and the light.

I tend towards the dark and macabre end of the spectrum – but I’ve been known to toss some glitter at a Light Court rave in my time too (true story). 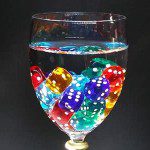 March 29, 2016
Hills of the Horizon: Narrative Theology III - the Doughnut and the Dice
Next Post

April 1, 2016 Adventures in Wortcunning: The Weight of Glory
Recent Comments
0 | Leave a Comment
Browse Our Archives
get the latest from
Agora
Sign up for our newsletter
POPULAR AT PATHEOS Pagan
1