The Blooming Staff: Under the Hill

The Blooming Staff: Under the Hill April 28, 2016 Nicholas Laccetti

What is the meaning of this column’s title, The Blooming Staff?

For a long time I tried, and failed, to choose: between decadence and morality, between paganism and Christianity, between individualism and the collective good. Certain dualities—the constant back and forth between division and unity, between devotion and blasphemy—recur frequently, an unresolved dialectic. “For I am divided for love’s sake, for the chance of union” (Liber Legis 1:29). Solve et coagula, et coagula et solve et solve et coagula.

As a moody teenager who spent most of his time reading Victorian poetry, the goddess Venus recurred frequently in my spiritual life. I was raised in proximity to Italian-American Catholicism, but this involved big feasts and red wine and blue-and-white Marian lawn statues more than it involved guilt over sex or human love.

And this was the 1990s, and I watched a lot of Buffy. The Wicca fad was in full swing and Aleister Crowley books were easily attainable.

St. Algernon Charles Swinburne (a saint in Crowley’s Ecclesia Gnostica Catholica, of course) was my favorite poet in high school. Swinburne’s poems mix pleasure and pain in a heady Victorian perfume of sadomasochistic classical myth and medieval folklore. The narrator of Swinburne’s “Laus Veneris” directly describes the continuing allure of the pagan Venus to the sorrowful Christ:

Alas, Lord, surely thou art great and fair.
But lo her wonderfully woven hair!
And thou didst heal us with thy piteous kiss;
But see now, Lord; her mouth is lovelier.

She is right fair; what hath she done to thee?
Nay, fair Lord Christ, lift up thine eyes and see;
Had now thy mother such a lip — like this?
Thou knowest how sweet a thing it is to me.

Under the influence of these things, I dedicated myself to the Goddess Venus when I was 16. I’m not entirely sure why or how, but I never forgot the moment, and the sense of being lost in the lines of a Romantic poem. The details would be too salacious to share here. But I promised the Goddess that I would have the kinds of affairs my favorite artists talked about in their work, full of high sorrow and passion. How the hell did I know what effect this would have on my later life?

I went to college and became a good Christian boy. I got myself baptized and later confirmed, sealed by the Holy Spirit as Christ’s own forever. I didn’t forget about Venus, and my Christianity always remained a decadent mess, more pagan than puritan. But for years the back and forth between occult passion and Christian piety marked my devotional life. I kept asking for forgiveness but never stopped living with the Goddess in her palace under the hill. And I did have a number of passionate, confusing, damaging love affairs.

The Goddess under the hill is a mytheme that recurs throughout European history and folklore. In the Romantic era the story was generally about the Fairy Queen, who took a lover under the hill to live with her as her consort. Thomas the Rhymer is the classic example (the fantasy novelist, Ellen Kushner, has an incredible novel based on it), but the myth appears in Keats’ “La Belle Dame sans Merci” as well as countless Victorian poems and paintings. The Fairy Queen’s love is as harsh as it is beautiful. It is co-dependency taken to a religious extreme.

The medieval version of the myth is about the Goddess Venus, who took refuge in the Venusberg, a palace under a mountain in Germany, after the triumph of Christianity in Europe. Tannhäuser is a German knight and crusader who, the ballads say, sojourned for a year with Venus under the mountain as her lover. The Brothers Grimm’ version of the story explains that Tannhäuser’s conscience “finally directed him to return to the world”; Tannhäuser made a pilgrimage to Rome to seek forgiveness for the pagan sensuality he had indulged in under the hill:

Filled with remorse, he set forth toward Rome in order to confess his sins to Pope Urban, and thus do penance to save his soul. However, after he confessed that he had remained an entire year with Lady Venus in her mountain, the Pope said: “Not until leaves begin to grow on this dry stick that I am holding in my hand, will your sins will be forgiven!”

-and the Pope sent messengers throughout the country, attempting to discover where Tannhäuser had gone. But it was too late. He was inside the mountain and had chosen a lover.

There he will remain until Judgment Day, at which time God may send him to a different place.

The medieval versions of this story express an anticlerical moral—a priest or pope should never discourage a sinner but should forgive all who offer themselves with remorse.

As an heir of the Decadents, Aleister Crowley produced a version of the story, too. This one subtly altered the specifics of the tale, foreshadowing some of Crowley’s later ideas in the philosophy of Thelema. Crowley’s Venus is “the evil and averse Hathoor,” Egyptian Goddess of love, and a diminished version of the Great Goddess Isis. Tannhäuser cannot find spiritual liberation under the hill with Venus, but neither can he find it with his pure and virginal love, Elizabeth.

Crowley’s Tannhäuser seeks forgiveness with the Pope, but the Pope’s rejection of him leads him to spiritual enlightenment, not a return to the Venusberg. Tannhäuser’s Holy Guardian Angel, the Silent Self or Higher Being which represents his True Will, is the force that causes the Pope’s staff to blossom.

Tannhäuser realizes he needed to pass equally through virtue and vice to reach the completeness that would allow him to be absorbed into the All. Neither sin nor grace is enough on its own. The mystic must pass through all experiences, including those deemed sinful by society. Tannhäuser ends the story with a vision of the Great Goddess Isis, who takes on the role that Crowley would later assign to the Star Goddess Nuit:

Isis am I, and from my life are fed
All stars and suns, all moons that wax and wane,
Create and uncreate, living and dead,
The Mystery of Pain.

I am the Mother, I the silent Sea,
The Earth, its travail, its fertility.
Life, death, love, hatred, light, darkness, return to me-
To Me!

The Thelemic Tannhäuser, then, does not need to oscillate between paganism and Christianity, between decadence and morality, or between pleasure and pain. Liberation is in receiving all impressions equally, and in dedicating them all to the Star Goddess to whom all things return.

I have trouble accepting this conclusion. In many ways, I continue to oscillate. My decan is the Four of Cups in the Tarot: Luxury. Pleasure and desire with the seeds of decay. Flowers and garbage. Venus as the evil and averse Hathoor, the pure and unassuaged desire who burns us up.

All of my theologizing goes back to that consecration to Venus, complicated by being sealed in the Holy Spirit as Christ’s own. The Empress comes up for me in every other Tarot reading. I am spiritually moved by old Christian hymns. I can’t forsake either Christ or Venus, so my pleasures always contain the possibility of guilt and repentance. And my repentance always contains the movement toward pagan sensuality. But I’m working on the Thelemic synthesis.

As of today I’m in love again. Venus isn’t done with me yet. So a few weeks ago I banished the planets and invoked Venus over her talisman (mysteriously sent to me in the mail, another story), consecrated it, and asked for her forgiveness for my failures in love. At first she seemed indifferent, amused by my plea, until I prayed the words of Sappho in her Ode to Aphrodite:

Come to me now: loose me from hard
care and all my heart longs
to accomplish, accomplish. You
be my ally.

And thus I remain, under the hill. If God has forgiven me for my transgressions, I wouldn’t know. I’d like to think so.

The Blooming Staff is published on bimonthly, but without a fixed schedule, here on the Agora; follow it via RSS or e-mail! 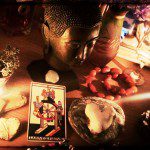 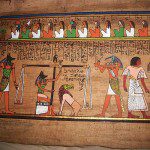 April 29, 2016 Hills of the Horizon: A Defense of Sacred Kingship
Recent Comments
0 | Leave a Comment
Browse Our Archives
get the latest updates from
Agora
and the Patheos
Pagan
Channel
POPULAR AT PATHEOS Pagan
1