The Blooming Staff: On Thelemic Catholicism — Mary or Nu-Isis?

The practice of Catholic syncretism — in which gods and spirits of non-Christian origin are glyphed or veiled in Catholic images of Jesus, Mary, and the saints — is a common practice in Afro-Caribbean religious culture. It has also become more typical in strands of traditional witchcraft, whose adherents practice “dual-observance” between orthodox Catholicism and a form of the witch cult.

Crowley’s personal antipathy toward Christianity is well-known. But he was not so scarred by his upbringing within the Plymouth Brethren to deny the power of certain Christian symbols, practices, or concepts which abound in the imagery and holy texts of Thelema. And, Crowley had at least one kind thing to say about Italian folk Catholicism, which he saw as more pagan than Christian:

The Sicilian peasant who can roar with laughter at some blasphemous obscenity of his village priest while preserving his devotion to the deities satirized, will justly be astonished and disgusted with me. He will hardly credit that anyone can take deities so seriously as to do anyone an injury on their behalf. He is at heart a Pagan; Mary is his mistress and Jesus his ‘Bambino’, and he loves to play with them in the woods where the sunlight traces its faint fan-patterns among the leaves.

The idea of a Jesus who objected to people playing on a Sunday — who insisted on being worshipped in a silk hat and frock coat, who couldn’t stand people obtaining refreshment after 12:30 — well, it never struck him, that’s all!

So when I go wandering among country-side Catholics I am nearly as happy in their simple worship as I am with the grander and austerer conceptions of Mohammed.

With all of this in mind, is there a way to appropriately glyph the Thelemic deities in Catholic guise? Could someone construct a “dual-observant” Thelemic Catholic altar, with icons doing double duty as portrayals of Catholic saints and Thelemic god-forms?

In her book Mary, theologian Sarah Jane Boss discusses the phenomenon of the Black Madonna. For Boss, the Black Madonna is an image of the Virgin Mary’s theological status as an icon of prime matter – the “darkness over the face of the deep” in Genesis 1. At this point in sacred time, matter is formless and void — the Ain Soph Aur of the Qabalah. God breathes the Holy Spirit over the face of this void, thereby bringing the world into creation.

The link between the void of prime matter – matter in potentiality – with Mary comes about through the Christian understanding of the Incarnation. In order to repair the fallen creation, God again sends the Holy Spirit to create form ex nihilo — in this case out of the womb of Jesus’ mother, Mary of Nazareth. Mary’s link to the foundations of the new creation thus connect her symbolically and theologically to the roots of the old creation, especially in the eyes of certain medieval mystics. Boss connects the primal darkness of the Black Madonnas, often linked to the Goddess Movement (see the work of Lucia Chiavola Birnbaum, for example) to this vision of Mary as the icon of prime matter, of limitless space.

Black Madonnas aren’t just conceptual ideas in feminist theology – they are physical icons, loci of devotion. The shrine of Our Lady of Le Puy in southern France, for example, is home to “one of the most famous of the numerous black Madonnas that are found in Europe” (Boss 74). Legend holds that the shrine was a druidic sacred place in the pre-Christian era, with a dolmen at the summit on which “sacrifices were offered to ‘the Virgin who would bear a son’.”

Boss reminds us that while such legends are historically questionable, they are rich in symbolic significance. The site of the shrine at Le Puy connects the “old religion” to the “new,” paganism to Christianity. In the Aeonic terms of contemporary occultism, the site connects the Aeon of Isis to the Aeon of Osiris.

The original statue of Notre Dame de Puy was destroyed during the French Revolution. Luckily, however, the antiquarian Faujas de Saint-Fond made a detailed description and drawing of the statue before its destruction. Saint-Fond “believed it to be a statue of the Egyptian goddess Isis with her son Horus, brought to France from Egypt in the mistaken belief that it represented Christ and the Virgin” (Boss 76).

Despite the unlikelihood that the original statue really had an Egyptian origin, stories like this suggest a link between the “Seat of Wisdom” icon of Mary and the Christ child and the artistic representation of Isis and the child Horus. Around the turn of the century, the dominant theory in comparative religion was that devotion to Mary as the Mother of God stemmed directly from late antique devotion to Isis and Horus. In popular occultism, this belief fed into major works such as Helena Petrovna Blavatsky’s Isis Unveiled – as well as Aleister Crowley’s Amphora, a prank on the Catholic publishing world in which Crowley veiled a set of devotional poems to Isis by changing the name to Mary (and adding an obscene acrostic in the epilogue).

Still, Crowley’s biographer Richard Kaczynski suggests that the Great Beast’s overall intent in Amphora “was not to blaspheme. The book originated with the realization that several of his poems in praise of non-Christian goddesses (and, often, gods) became perfectly acceptable hymns by merely changing the name to Mary and perhaps changing a key word or two. He thought this significant, and set about to write a set of hymns to the Virgin Mary from the mind set of a pious Christian” (Perdurabo, 182).

The mixed iconography of Isis and Mary also appears in another of Crowley’s early works. In Tannhauser, the esoteric Pilgrim’s Progress based on the medieval Tannhauser legend, the final vision of Isis more than resembles the famous image of the Woman Clothed in the Sun in the Biblical Book of Revelation:

And lo! the light
Shed from Her shoulders whom I dimly saw;
Crowned with twelve stars and horned as the moon;
Clothed with a sun to which the sun of earth
Were tinsel; and the moon was at Her feet–
A moon whose brilliance breaks the sword of song
Into a million fragments; so transcends
Music, that starlight-sandalled majesty!

Tannhauser’s vision of Isis at the end of the play marks his absorption into the All. At this point he is no longer a personal “I” but Osiris slain and risen, a “new Christ” who will redeem the world “to more purpose than the last.”

Written before his full acceptance of the Aeon of Horus, Crowley’s Tannhauser story isn’t a perfect example of Thelemic cosmology. Tannhauser’s spiritual liberation has more to do with the formula of Osiris than of Horus. But the knight’s vision of Isis is intriguing because of the iconography involved. The Great Goddess’ speech suggests she has the characteristics of the Thelemic Nuit: “from my life are fed / All stars and suns, all moons that wax and wane.” Isis’ last words are “To Me!” — a line that should be instantly familiar to readers of The Book of the Law.

Furthermore, Tannhauser’s vision of Isis causes his spirit to withdraw “Into Her godhead,” where he experiences “some old mysterious abyss” between “the heights of starry space” — “Blending the darkness into the profound / Chasms of matter.” Like Nuit, Tannhauser’s Isis is linked to prime matter, without limit or circumference. She is a Star-Goddess, an occult icon of interstellar space.

Isis’ physical characteristics, meanwhile, resembling as they do the Woman Clothed in the Sun in Revelation, connects her to the concept of Mary in the Catholic Tradition. This is especially visible in the popular Catholic devotion to Our Lady of Guadalupe — whose own complicated links to pre-Christian religion are too extensive to discuss here.

So it is no stretch to suggest that the Thelemic Nu-Isis, as Crowley established in his Amphora prank, as Tannhauser encounters in his vision, can be meaningfully glyphed by certain Marian figures.

On the Catholic side, the mystical understanding of Mary — especially of the Black Madonna — as a cosmic icon of prime matter, “the darkness on the face of the deep,” links up smoothly with the Thelemic conception of Nuit as “limitless space.”

And in this formulation, the Seat of Wisdom image, long thought to be adapted from the image of Isis and the Child Horus, now portrays Nu-Isis with the Crowned and Conquering Child, the solar deity of the New Aeon. Kenneth Grant suggests this connection between the Seat of Wisdom and the figure of Nu-Isis in his reading of the Stele of Revealing in Aleister Crowley and the Hidden God: “On the Stele Nuit embraces all as the outer veil of the universe (Nephthys), while Isis is disguised as the Seat of the Son-Sun, Horus.”

Through the conjunction of Nuit and Hadit — himself appropriately glyphed, as in the O.T.O. lamen, by the dove of the Holy Spirit — the child is born who ushers in the Aeon of Horus.

Out of the possible Marian images, Notre Dame le Puy provides one of the largest ranges of synchronic meaning. This “Egyptian” portrayal of the Great Goddess and her son, enshrined in a site that already links the “old religion” of pagan Europe to the “new religion” of Catholicism, now links the latter to the religion of the future — Thelema.

And to return to the question I posed at the outset of this column, Notre Dame le Puy’s status as a Black Madonna means the New Age shops stock a ready-made statue with which to adorn a Thelemic-Catholic altar.

But even the more common sorts of Catholic iconography will do. The next time you see those ubiquitous votive candles to Our Lady of Guadalupe, to the crowned infant Jesus or to the Holy Spirit as a dove — perhaps at your neighborhood bodega — think on their meaning in the Aeon of Horus.

After all, it’s true that Liber Legis states that “the rituals of the old time are black” (II.5). But the passage continues by qualifying that remark: “Let the evil ones be cast away; let the good ones be purged by the prophet! Then shall this Knowledge go aright.” 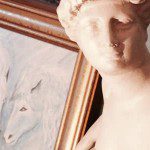 May 23, 2016
Star Made Witch: The Function of Spell Components
Next Post 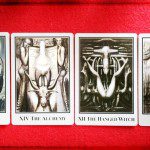