Dandelion Seeds: Face to face with hatred, what do we do?

There are moments that freeze in your memory. There are times the news is so significant that people will talk about where they were when they heard it. For my parent’s generation it was the assassination of Kennedy. I remember where I was when I heard about the 9/11 attack. I was with a group of students at the MSU greenhouses learning about how to make soil mixtures. This time I saw it on my phone while I was drinking coffee in my house.   It took a while for the horror to sink in. It’s with me now. The memory of the spike of fear for myself and my loved ones. The horror at the loss of life.

Within me a threshold has been crossed. Though I am far away from Orlando, though I know none of those poor people, I am changed. Having gone through various initiations and oaths, having crossed the threshold of parenthood and felt the weight of the clergy stole upon my shoulders, I can recognize these things now. I feel the journey before me. I see it for many of us.

In this world there are people who would kill because of hatred. I have know this for a long time. But the threshold has been crossed. I have worked to create safe spaces, I have listened and loved and lived my own weird, non-traditional life as large as I could.  But it’s not enough anymore.

I cannot sit idle with this.

I don’t think this is a question of Muslim versus LGBTQ at all. It’s too obvious that religion is just an excuse, and a poor one, for violence. Black men women and children have been tortured and killed merely because they were black by those who were supposed to be protecting them.  There was no religion in that. The Olympic hopeful swimmer who raped that girl didn’t do it because he was a religious fanatic. Violence resides within us and within our culture. Ta-Nahisi Coates says: “Here is what I would like for you to know: In America, it is traditional to destroy the black body—it is heritage.”  Replace the word black with minority and it still rings true.

Destruction is a way of life that we are comfortable with. We love movies that have epic wars and vast struggles against galactic empires. There is an urge to fight back. To lash out at those who would harm me and mine. I don’t think there’s anything wrong with learning self defense and practicing it until you could use it when you needed to. I think there’s everything right with it.

What can any one person do in the face of such ingrained hatred?

Not a whole lot, I am afraid.

A friend of mine said this to me when I told him I wasn’t a warrior:

“Being a warrior isn’t about how many people you kill or what you break. It’s about looking adversity in the eye and not letting it walk over you without a fight.”

When I look hatred in the eye I want to hate back so badly.

I wonder if Martin Luther King Jr was right to be a pacifist. Maybe Malcolm X was correct when he believed in defending his people against racism, violence against violence.  I cannot imagine killing a person. I’ve killed chickens, a goat, a woodchuck once in defense of my garden.  In the end I do not want to be that person who would hate back.  It would destroy what I am.

What does the lore say on violence and hatred? We can see from the Norse sagas, the Celtic Tain, and the Illiad itself that violence begets violence. There are no pacifistic heroes in these stories, only those who die heroically and those who don’t. What about those who don’t fight? We have the story of Brighid’s loss of her son Ruadan. He dies fighting the Fomorians, and that is how keening for the dead was created. Death, heroism, and loss seem to be inevitable. We cannot escape it.

We are at war, in a war not of our own making. We are battling merely to exist against those who would use violence against us, to silence us, to make us sit down and shut up so that they can feel their beliefs are validated. I will not be silenced.

How do we win this battle?

I think that we win by learning to defend ourselves.

On the idea of defense, I have no idea what I could have done if I was in that Orlando night club, but I do intend to find out. What does one do when confronted by a violent situation? We owe it to ourselves to educate ourselves. We learn so many skills as pagans: magic and divination, trancework and public speaking. We can learn defense too, and at this point I think we should. Pagans aren’t all LGBTQ, but many of us are. We don’t have dogma that says loving someone of the same sex is a sin. Paganism and Druidry have been a safe harbor for me. I intend to defend that harbor both for myself and for others. This could mean taking a course on self-defense, lobbying for anti-gun laws, educating people, building coalitions or creating safe spaces.  There is more than one answer.

The other part of that statement is “ourselves”. Who is ourselves? How do we define it? Just our own bodily sovereignty? Our family? Our local grove, or coven? We must define the group we are willing to defend before we can defend it.

To me, I see that group as larger than my family, or my grove, or even my church, ADF. I have attempted to define it, called it the Tribe of the Outsiders. We are the ones who choose to be who we are and accept others as they are. We know them when we see them, and when we don’t. We are larger than we might think, and include both those who are LGBTQAI and those who are not.   I believe it is imperative to embrace those people who would embrace me, not in our sameness, but in our glorious differences and then together we can learn to defend ourselves.

We win by changing ourselves, by supporting each other in that change and by understanding that we are battling against countless centuries of human hate, against our own inner desire for revenge, against the mental illness known as extremism, found in every religion and philosophy.

It’s everybody together that wins and we win by being together.

We must hold tight to those who will aid us. And how do we know who those are? They are the ones who want to be held. 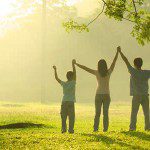 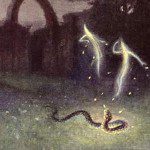 June 16, 2016 Outside the Circle: The Bad Fairies Of Litha
Recent Comments
0 | Leave a Comment
"Thank you for saying this part: "Let me state unequivocally that there are parents so ..."
Nichole Cardillo Simple Witchery: Right Relation – Holding ..."
"I'm sorry but there is all sort of fear mongering in your blog post. Crossing ..."
Theresa Day Stirring the Brew: Underworld Crossings
"I'm doing a college paper in my history class about paganism making a come back. ..."
Alex Route Hearth of Hellenism: The Greek Wheel ..."
"One night driving home through the country, two coyotes ran across the road in front ..."
Wolf Stirring the Brew: Underworld Crossings
Browse Our Archives
Related posts from Agora