So we are quickly coming up on the summer solstice, which is another of those minor holidays for my family, but one that we do celebrate. Our main focus tends to be on the spirits of the Otherworld as we celebrate the longest day and shortest night though and not on the solar imagery as much. This time of year after all has a good amount of fairylore attached to it, Shakespeare or no, from the belief that it was now that the Wild Hunt went to its rest until Yule to the belief that the fairies were out and about looking for mischief around St. John’s eve (June 24th). In mythology, it was this time of year as well that the Tuatha De Danann and the Fir Bolg met in battle to decide who would rule Ireland, according to the Cath Maige Tuired Cunga.

For my family the summer solstice is a time to honor Áine, goddess and fairy queen. We do that by baking a cake, something that my children enjoy doing for its own sake, frosting it and decorating it with solar imagery. The first piece is offered to Áine, the second to the Good Neighbors, third to the ancestors, and then the rest is shared among the family. We’ve had this particular tradition in my family for many years now, something that started  as our own version of offering bread on the holy days but more fun. I don’t know that I’d have kept up with it myself but the children enjoy it so much that every year we make a morning of it on the eve of the solstice. The cake is always vanilla with white frosting to symbolize the strength of the summer sun, and we decorate it with sun imagery or triskeles.

There’s a long historic tradition in some parts of Ireland of honoring Áine on midsummer, although not with cake (that I know of). Rather traditionally there would be torchlit processions on her hill, Knockainey, in county Limerick. Ashes would then be spread over the fields for luck and blessing.

Another deity who was honored at this time of year was Manannan mac Lir.  It was said on the Isle of Man that it was on St. John’s eve that people had to pay rent to Manannan to live on the island, as he was its first ruler. Manannan, like most of the Tuatha De Danann, is strongly associated with the Fair Folk as well as the Gods and whenever my family is by the ocean this time of year we always remember to give him his due as well.

We acknowledge the Good Neighbors regularly of course, but on the holy days they get a bit extra, as we believe that at these times they are more active. We also believe that at the turning points of the year they are owed a certain portion of their own, to ensure luck and blessing for us and to minimize their potential negative interference. So we give to them traditional gifts: milk, honey, bread. And on midsummer a bit of cake as well, for the sake of amity and in the spirit of sharing what we have.

Summer is not my favorite season, and I find that where it makes other people more outgoing and active it tends to inspire introspection and withdrawal in me. I respect the wider themes of summer as a time of light and growth, but I turn that light and growth inwards, into personal growth and contemplation. Nonetheless having three young children means a certain amount of activity, so I do try to find ways to keep them busy and entertained and also to connect our spirituality to their daily lives. We go on walks and I point out wild herbs and tell them stories about how to use them. And, being me, I also tell them stories about the Gentry, both fair and dark, about the mischievous puca and the dangerous amadan na bruidhne. Maybe they listen and maybe they don’t.

On midsummer – the holiday between Bealtaine’s earthy celebrations and Lúnasa’s harvesting – we celebrate the joy and growth of the light half of the year. We acknowledge, formally, what we live with everyday – the knowledge that the world we live in is shared by myriad spirits and is touched by the Gods. We give back a bit of what we have, what we’ve been blessed with, because we believe that reciprocity is at the heart of all good relationships. And one of our goals is to have a good relationship with the Gods and spirits that we honor. 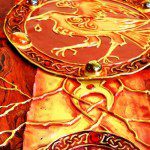 June 6, 2016
Seeking the Grail: Interruption and Creative Flow
Next Post 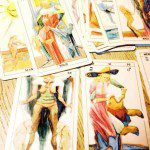 June 8, 2016 The Cartomancer: Relax, Your Local Gods can only be Discovered through Foreign Intervention
Recent Comments
0 | Leave a Comment
"Several aspects of your story definitely resonated with me. Thanks very much for opening yourself ..."
Laurie Allen Salt City Pagan: Leaving It All ..."
"Hmm. Reminds me of something I heard in the Jim Henson movie "Labyrinth". The riddle ..."
Amanda Ingalls Salt City Pagan: Lughnasadh 2021
"Great article. Loved the ritual!"
WildestSea Salt City Pagan: Lughnasadh 2021
"“I disapprove of what you say, but I will defend to the death your right ..."
BrainSync Beyond Binary Witchcraft: In Praise of ..."
Browse Our Archives
get the latest from
Agora
Sign up for our newsletter
POPULAR AT PATHEOS Pagan
1