The Blooming Staff: Eschatology – The Marker of Christian Occultism

As I continue my research into post-Crowley forms of Thelema, Christian theology, and other occult traditions (especially the teachings of the Universal Brotherhood, which Frater Achad led as Mahaguru starting in the early 1930s), one major point of difference has emerged for me between Christian forms of occultism and non-Christian traditions like Thelema: eschatology.

In a word, Christianity — including and especially forms of esoteric Christianity — is deeply concerned with eschatology. Eschatology is the study of the Last Things — not just the “Apocalypse” in a popular or literalist sense (as in, Jesus coming down from heaven on a cloud and instigating a literal war with Satan, a la the Left Behind series), but also human and cosmic destiny. Eschatology is the area of theology that deals with ultimate value and macrocosmic possibility — the created universe, and the human being, transfigured into the form God finally intends for them. Non-Christian, secular forms of eschatology also exist — the full communism of Marxism, for example, or the transcendence of the human in transhumanism.

Yet Thelema, drawing strongly on strands of neo-Buddhism and Hinduism (especially Advaita, non-dualism), doesn’t really have an eschatology. As the Thelemic writer IAO131 explains, drawing especially on Crowley’s entry for Atu XX: The Aeon in The Book of Thoth,

There is certainly no Last Judgment in the philosophy of Thelema. In a sense, one can view the attainment of the Crossing of the Abyss, the destruction of the personality or ego, as the end-times of the ‘self’ and the waking to the Self. Another interpretation of eschatology is the “destruction of the world by fire” (which can also be interpreted in the former sense of the destruction of the self), which Crowley gives symbolically in Atu XX: Aeon of the Tarot. In this other interpretation, the world was ‘destroyed by fire’ with the reception of Liber AL vel Legis in 1904. Crowley writes in The Book of Thoth, “The old card was called The Angel: or, The Last Judgment. It represented an Angel or Messenger blowing a trumpet, attached to which was a flag, bearing the symbol of the Aeon of Osiris… The card therefore represented the destruction of the world by Fire. This was accomplished in the year of the vulgar era 1904, when the fiery god Horus took the place of the airy god Osiris in the East as Hierophant.”

In the former interpretation of Thelemic eschatology, Thelemites believe that the manifest (or “conventional,” to use a frequent term from Buddhism) world must be bypassed so that we can realize the inherent emptiness of all phenomena; the noumenon beyond the Abyss is found to be empty — “not” — as there is no thing-in-itself outside of our illusory perception of it. Once our “veils” are purified and made transparent, our Star is found to be one with the All (“AL” or God); and the All is ultimately found to be empty (“LA” or nothing). This realization also underpins Frater Achad’s discovery of “AL” as the key to the Book of the Law.

As cited in my earlier column on Achad, in qabalistic myth, the Daughter (Malkuth) is married to the Son (Tiphareth) and thereby arouses the force of the Father (Chokmah), raising the Daughter to the Throne of the Mother (Binah). The Thelemic interpretation of this myth is that the aspirant purifies his veils through equilibrating and thereby canceling out all opposites or dualities, reducing himself to Nemo or nothing and through this sacrifice — symbolized in the pouring out of one’s blood into the cup of Babalon — is able to cross the Abyss to the Supernal Triad, thus installing the aspirant’s animal soul of Malkuth on the Throne of Binah.

Mystically, this means that the individual aspirant — for the A.’.A.’. system is a system of individual attainment, even when pursued in a group lineage — has killed his ego-self and become one with the All, which ultimately means becoming Nothing. This Boddhisatva-like being is then able to advance to the grade of Magus (Chokmah) to produce a Word for other, lesser beings in order to assist them in their aspiration to the same attainment. (For more on this process in terms of Thelema, J. Daniel Gunther’s The Angel & the Abyss is an excellent source of information.)

Yet a truly eschatological viewpoint — the essential viewpoint of the Christian mysteries — would have to contest this perspective. The qabalistic myth of the redemption of the Daughter, in eschatological terms, means more than the purification of one’s veils in order to see the Perfect that is already there. Instead, something must be transmuted; something must be changed.

In the case of Christian eschatology — and the eschatology of many occult systems in the West before the infusion of Eastern perspectives that occurred in the late nineteenth century — what had to be transmuted was nothing less than the cosmos itself. The noumenon is not empty in this formation, because (Catholic) Christianity historically holds a philosophically realist perspective. Matter is not an illusion, and phenomenal manifestation is not a conventional viewpoint that needs to be transcended. The alignment of the microcosm with the macrocosm in the completion of the Great Work (the redemption of the Daughter in the qabalistic myth) does not equilibrate to zero.

As qabalistic commentator Colin Low explains, there tend to be multiple interpretations of the Tree of Life — a “Model A” which states that “the sephira Malkuth represents the whole physical universe; the sephiroth from Yesod to Chesed (the Microprosopus) represent a sentient, self-conscious being; the supernals represent the God of the whole universe, God-in-the-Large” and a “Model B” in which “the Tree of Life is a model of human consciousness; the supernals represent the God within, God-in-the-Small.”

In our discussion here, Christian eschatology and associated forms of occultism tend to utilize the first model, whereas Thelema utilizes the second. This is why Crowley can claim grades of attainment within the supernals, while more Christianized forms of occultism (including the Golden Dawn) tend to suggest that it would be impossible to reach those spheres during terrestrial existence. As Low explains,

Eschatologically, then, the raising of Malkuth to the throne of Binah through the arousal of Chokmah — the joining of Wisdom and Understanding — in fact leaves one in Daath, the false sephira of Knowledge. At the peak of attainment, we are left with Manifestation, not emptiness; Manifestation that has transfigured the material cosmos — not just the individual aspirant, but the the whole material cosmos — into the Kingdom of God on earth.

This is the final step of the cosmic process, the Great Initiation begun by Eve when she ate the fruit of the Tree of Knowledge in the Garden. As microcosmic aspirants, reaching this point means that we have become the first fruits of the eschaton, the heralds of the Apocalypse.

Meanwhile, in the latter interpretation of Thelemic eschatology mentioned by IAO131, the macrocosmic potential of orthodox Thelema remains small in scope: the passing of the Aeon of Osiris into the Aeon of Horus. Crowley has replaced the Trump of “Judgement” with the Atu “The Aeon” — a temporally limited formula. Yet the attempts by Achad, Kenneth Grant, and the Maatian adepts to transform the legacy of Thelema tends to coincide with a desire, historically common among Western occultists, to evince a macrcocosmic transformation along with a microcosmic one. (Indeed, it is increasingly clear to me that much of Achad’s doctrinal disagreement with Crowley hinged on his growing interest in macrocosmic eschatology — something I hope to write about at length in the future.)

Instead of purifying the gross matter of the aspirant to allow for the descent of the supernals, the Christian desires the transmutation of all matter to allow for a true and lasting Incarnation. We pass from microcosmic attainment to eschatological transfiguration. This is the secret key of all traditionally Western mysticism and esotericism (at least, prior to the late 19th century). Crowley, meanwhile, clothes Eastern metaphysics — “only the veils must be purified, to reveal the Perfect already within” — in the Rosicrucian language of the West. As Liber AL II.58 proclaims, “Yea! deem not of change: ye shall be as ye are, & not other. Therefore the kings of the earth shall be Kings for ever: the slaves shall serve. There is none that shall be cast down or lifted up: all is ever as it was.”

In the West, meanwhile, from the Book of Revelation to John Dee, from the Martinists to Frater Achad, all will NOT ever be as it was. There will be a New Heaven and a New Earth. The New Jerusalem descends from heaven like a bride adorned for her bridegroom — the Bride’s Reception. The twentieth Trump card is The Last Judgment, not The Aeon. As Achad stirringly writes in the preface to The Anatomy of the Body of God,

In the Name of the True and Living God, let us cease from bloody sacrifice, and start to build a “Living Temple, not made with hands, eternal in the Heavens” — upon Earth.

October 10, 2016
Book of Blackbirds: The Difference Between Faeries and Elves
Next Post 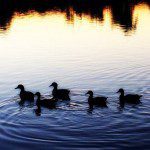 October 12, 2016 The Cartomancer: Ritual for meeting your ancestors in the simple
Recent Comments
0 | Leave a Comment
"Thanks Kyllein and sorry that I didn't respond sooner. Yes, I agree, it was well ..."
Brianne Raven Wolf Between Two Worlds: Anna, Another Lesson ..."
"Charlie, wow, thank you. I got to your article by searching for the meaning of ..."
Madam. V. Of Light & Shadow: Anubis, God ..."
"That's such a very reassuring article. I too have a little of that "being outside ..."
JenniWest The Corner Crone: Theory, Practice, and ..."
"I'm so glad you had a good time Martha! Can't wait to see you next ..."
Nathan The Corner Crone: Theory, Practice, and ..."
Browse Our Archives
Related posts from Agora