The Blooming Staff: “What We Shall Be” – Illuminati, Otherness, and the Grand Consummation

In the Preparatory Essay of the Bavarian Illuminati, the author states plainly the intellectual framework of that much-maligned society:

There are certain truths, holy truths, that enlighten man about his past, present, and future condition. – They most certainly exist. – Call them revelation, or what you will. – Whether they are the results of thorough research or communications from the hands of higher beings – enough! any intelligent man is bound to feel that he requires them, because he remains in doubt about so many things in nature. (The Secret School of Wisdom, 47)

In this statement, the Illuminati establishes itself as an order concerned with propagating the universal wisdom required for the right ordering of human society, whether that wisdom originates with higher beings, scientific research, or from some other source, sacred or secular.

The idea of a peaceable planetary commonwealth, founded on the universal principles of wisdom enshrined in the world’s great religious traditions, and respecting the inalienable rights of all human beings, seems to be a laudable goal. But the Illuminati quickly fell due to infighting, political repression, and the usual institutional failures – and it is now a byword for any would-be conspiratorial society that secretly plots a New World Order, from the instigators of the French Revolution to reptilian shapeshifters from outer space. The historical Illuminati’s vision of a universal utopian society founded on reason has become a superstitious mélange of dystopian nightmares, usually involving some combination of the Vatican and the British Royal Family.

Perhaps it was destined to be so. Practically any group whose goals include the radical reformation of society is pegged at one point or another as sectarian, intolerant, or potentially evil, either politically or supernaturally. The Gothic novels of eighteenth and nineteenth century England had their cruel Jesuit Illuminati Freemasons as the villains, inciting rebellion between bouts of sexual depravity and decadence (never mind the fact that the Illuminati and the Jesuits were essentially arch-nemeses). The pulp fiction of the United States combined (and still combines) some assortment of Catholics, racial minorities, and communists as the enemies of our moral and political order. If the Black Lives Matter movement hasn’t yet been linked in any conspiracy theories to the lizard people, dangerous communists, or the Illuminati, it is only a matter of time.

Like the hybrid human-alien antagonists of H.P. Lovecraft’s weird fiction, working against the white Anglo-Saxon protagonists and their sedate New England reason to summon the Deep Ones back from their slumber to retake the Earth as their rightful home, the political, moral, and cultural imaginary of most societies usually includes a mythical version of the Other and its nightside encroachment upon the civilized world’s daylight consciousness.

It is a radical act, then, for occultists like Kenneth Grant to valorize the ontologically Other, to suggest that the Great Work includes the mutation of human consciousness into something Beyond, something that undermines the certainties and pieties of not only our present-day civilization, but also the very notion of the “human” itself.

Similarly, the late nineteenth century Decadents reappropriated the otherness of Catholicism in Victorian England – religious otherness, yes, but also the otherness of condemned sexualities and gender presentations – to position themselves as the rebellious antagonists of a cruel and oppressive British Empire. As literary critic Ellis Hanson explains, Catholicism was the “last gasp” of paganism in a bourgeois, capitalist, puritanical culture. If Catholicism represented the occult, the feminine, and the exotic – paganism, mysticism, and sexual decadence as opposed to rational, reasonable, muscular Protestantism – then it would be the religion of choice of those who saw themselves beyond the pale of mainstream society.

Yet political utility is only one reason for this principle of reappropriating otherness. To return to the start of this essay, the Illuminati Order saw itself not as proposing radical, artificial doctrines as a replacement for the common sense of traditional society, but as reforming society along the lines of “certain truths, holy truths” that exist as the primordial bedrock of human life, as embedded in the “soil of sentiency,” to use a phrase from Grant’s Outside the Circles of Time.

Or, as radical theologian Edward Schillebeeckx puts it, humanity’s existential questions are “sustained by the reality of creation” and thus, implicitly, “rooted in the soil of all religious experience: God’s sovereign and unexpected act of creation” (Schillebeeckx, The Understanding of Faith, 98). This “superior power of God’s good act of creation arouses in us the quest for the real basis of the datum of experience that people, despite everything … continue their trust that goodness and not evil must have the last word.” As a Catholic, for Schillebeeckx the Christian gospel “extends this ‘must have’ to ‘will have’,” but even so, without humanity’s prior ‘must have’, “the christian ‘will have’ would be unintelligible.”

There is, then – according to Catholic theology and occultism alike – a pagan wisdom, a natural religion, embedded in the “soil” of humanity’s religious experience. The experience of this reality is prior to all doctrinal speculation, philosophical reasoning and, according to Schillebeeckx, to all activist attempts at improving the condition of humanity on this planet. For Kenneth Grant and other occultists, it comes from Beyond human consciousness, and will result in the cosmic aeonic evolution of our race. The Illuminati didn’t care whether it came from higher beings or from natural reason, all that mattered was the fact that our civilization should be re-founded upon it.

The conflation of the Illuminati, the left-hand path of occultism, the Jesuits, and our Alien Overlords from Sirius, starts to seem less odd when considered from this angle. All the most radical theologies and philosophies point to the same essential idea – humanity and human civilization must evolve beyond its present impasse, and this evolution will be rooted in the telluric soil of our primordial being. For the Powers That Be, this idea is dangerous and Other, and is usefully mythicized as an alien invasion, a Freemasonic plot, or a Vatican conspiracy.

In the eighteenth century, the Illuminati faced opposition from both the conservative Catholic Church and the reactionary Rosicrucians of the Order of the Golden and Rosy Cross. The Illuminati remains a symbol of dangerous revolutionary occultism for both conspiracy theorists and more traditional esotericists. This “left-wing” of esoterica was invoked by Paul Foster Case in 1933 in a letter to Israel Regardie, when Case identified the Universal Brotherhood (led at that time by Frater Achad) as a “tawdry revival” of Weishaupt’s Illuminati (Martin P. Starr, The Unknown God, 116).

There may be more than mere slander in this accusation. Although there doesn’t seem to be any direct or indirect link between the Illuminati and the UB, it is true that the Brotherhood’s world-view maintains a similar suggestion of promoting universal wisdom and Integral Truth – “certain truths, holy truths, that enlighten man about his past, present, and future condition” – in an effort to transform human society. And like Schillebeeckx and Grant, the Brotherhood locates this knowledge in the primordial soil of all religious experience, the deep and cavernous subconsciousness of the human race. Unsurprisingly, the Universal Brotherhood was also declared to be a nefarious Jesuit plot by Annie Besant in 1912, thus completing the unholy trinity of conspiracy theorists everywhere in the mythology surrounding the UB – the Illuminati, the Catholic Church, and a vision of a New World Order.

But the drive to form a Planetary Commonwealth, to complete the Great Work, to reach the Grand Consummation – what Frater Achad called “the Universal Terrestrial Realization of the Ideal, the deliberate carrying into effect and bringing to full fruition of the Divine and Macrocosmic Purposes” (Starr, 120), what Schillebeeckx saw in the “concentrated creation” of the Christ, and what Kenneth Grant called “the Arachnean Aeon of the Outer Ones” which will span “the gulfs of Time and Space” and in which “the ‘Great Race’ will be exalted” (Beyond the Mauve Zone) – remains a dangerous and necessary idea, a “divine contagion” (Hanson) which has the potential to transfigure the very nature of humanity and human civilization.

As the First Epistle of John proclaims, “What we shall be has not yet been revealed. We do know that when it is revealed we shall be like God, for we shall see God as God is.” 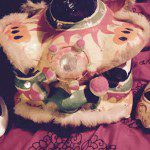 October 24, 2016
Star Made Witch: Masks and Guising on Samhain
Next Post 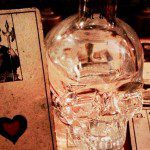 October 26, 2016 The Cartomancer: Attending to the Supernatural
Recent Comments
0 | Leave a Comment
"What a very beautiful and inspiring way to describe the struggle we all have to ..."
Freyja Babalon’s Cloister: “I’m not a Magician, ..."
"Two years later I come back and reread this article, and still think it's one ..."
Wolf Cross and Crossroads: In Defense of ..."
"I share your thoughts and hope that wise world leaders with rise up and prevail."
Willow Rose Between Two Worlds: The Dark Times
""Many were trans women who had to resort to sex work in able to pay ..."
Harold Masters Between Two Worlds: Mika
Browse Our Archives
Related posts from Agora