Hills of the Horizon: The Past is Another Country

One of the standing problems of reconstruction is this notion of trying to figure out what would have happened with the religion in question had other forces not intervened. This is not an actually solvable problem; any extrapolation is going to be someone making some stuff up, and it will not resemble a natural evolution. Dealing with the cognitive dissonance from this is one of the essentialities of reconstructionist religion.

(My go-to example on “You cannot predict how a religion would have evolved” is part and parcel of my own heritage. Imagine, if you would, a person interested in reconstructing Puritan religion from colonial Massachusetts. There is a grand wealth of data on this, rituals and beliefs and liturgies. That person might well make a lot of progress on that, and try to figure out how to update that stuff for the modern day. But then they’d run aground on the fact that those Congregational churches evolved into the Unitarian Universalist Association and the United Church of Christ. Hence my occasional joke that I have returned to the religion of my ancestors.)

Over the course of Egyptian history, the idea of accessibility to religious texts and rituals shifted and transformed. The divisions were always complex and class-based, but notably more porous than they appeared on the surface. Even if the temples were usually closed to the common people, many of the priests only worked a few months out of the year, and had other jobs the rest of the time, which might well include sharing their knowledge. The scribal jobs and the formal magicians were probably the day jobs of people who worked a shift as priests.

So there was this idea called the “democratization of the afterlife”, originally formulated as the notion that only the king, and later the royal elites, had access to the afterlife in Egyptian theology, and that this over time filtered out to the rest of the community. There are various reasons that this is implausible as a full explanation, but it was certainly the case that over time the display of royal iconography and images became more acceptable. Further, as literacy became more common, more people could make use of those texts.

The mere job of priest, moreover, was a part of the process of transformation. Strictly speaking, according to the theology, only the king could perform rituals, as the son of the sun. In reality, the rituals in the temples not only required teams of priests to perform, but also were conducted in multiple locations simultaneously. The king’s power to connect the divine world with the mortal one was delegated out to those priests, who did the work of maintaining those temples on the vast majority of occasions. For their troubles, meanwhile, almost all of the portrayals of the rituals on temple walls were pictures of the king.

The Amarna period disrupted these patterns substantially, and attempted to establish a near-monotheism in which the king was the only true ritualist. Unsurprisingly, Akhenaten’s Egyptian theology did not long survive him. In the aftermath of the Amarna disruption, traditional Egyptian forms returned to the artistic world – but additional illustrations appeared as well, such as the journey of the night barque through the body of Nut. These feminine mysteries were not new ideas in Egyptian thought, but their portrayals suddenly emerged, as if in reaction to and denial of the sun-soaked night-denying Amarna theology. Akhenaten’s apparent fear of the dark brought forth the blossoming of acknowledgement of the night.

By the time Egypt was an occupied territory, the priests and the kingship had a very uneasy relationship. The Ptolemies sought to largely allow the native religion to continue its ritual work, in the hopes of keeping the nation peaceful. However, the priests did not always approve of the current kings, and one of the ways that this may have manifested was the well-preserved late ritual of the investiture of the Sacred Falcon. In this ceremony from Edfu, the yearly re-crowning of the king as an incarnation of Heru (Horus) included an oracle rejecting every human who came before it seeking the crown. Every priest and official who presented himself as a possible representative of Heru on earth was turned away, and eventually the office was bestowed upon an actual hawk raised on the temple grounds. There are many ways of understanding this ritual, but one of them is certainly as an act of resistance to a government that dismissed some aspects of Egyptian religion as no more than primitive animal cults.

Each of these disruptions and transformations (and many others unstated) make any certain statement about the natural evolution of ancient religion questionable. Does the democratization process make for a sort of decentralised small-community or home practice, in the end, or does the symbolism of the divinised state reassert itself to become dominant once more? Does a human ever embody governance, or is that whole question for the birds? What pieces of theology do we emphasise in the response to massive social traumas? What things get set aside, or change, or become more exclusive, or less?

None of these questions have answers.

We always have to decide for ourselves. 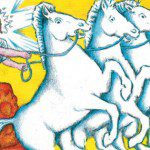 May 25, 2017
Everyday Pagan: The 8 Things I Learned from "D’Aulaires’ Book of Greek Myths"
Next Post 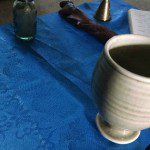 May 29, 2017 The Other Side of the Hedge: How to Build Your Magical Altar
Recent Comments
0 | Leave a Comment
"Thank you for your comment. There are times when the only peace and healing to ..."
Willow Rose Simple Witchery: Right Relation – Holding ..."
"Brianne you are back in Wisconsin! That is so exciting."
Willow Rose Between Two Worlds: Remembering Mabons Past ..."
"Thank you for saying this part: "Let me state unequivocally that there are parents so ..."
Nichole Cardillo Simple Witchery: Right Relation – Holding ..."
"I'm sorry but there is all sort of fear mongering in your blog post. Crossing ..."
Theresa Day Stirring the Brew: Underworld Crossings
Browse Our Archives
Related posts from Agora