I have an orange Jack O’ Lantern pumpkin plant now growing in my garden, so fingers crossed it makes it to harvest. I wish we could get those pretty ornamental gourds here in Australia like we have back in Tennessee, or even the plain kind we used to use for water dippers and making blackbird houses. Some gourds are good for decorating up and making rattles and drums out of, too. They have so many uses; there’s just something about squashes and pumpkins and gourds that I find magical and always have.

Pumpkin is one of those staple foods you find here in Australia and all the grocery stores are full of them, but not the big orange pumpkins– you only see them at Halloween, as recently past, after which they evidently go back behind the mystic veil and don’t come out again until next year when the veil thins and witching time rolls back around. The rest of the time the pumpkins here are mostly all butternuts and kents and grayskins, more rightly winter squashes than true pumpkins – good eating, but not quite the same. The only other squashes we have are the little button shaped ones called pattypans, hardly what I’d call a proper Southern squash, but we scrape by with them as best we can.

I accidentally smuggled a yummy yellow crookneck summer squash back from the States in my carry-on bag after my recent trip there. Hardly anybody here has ever heard of them. I had bought it for a crunchy lunchtime snack on my last day in the country and then forgot all about it being in my satchel bag. Of course you aren’t allowed to bring back anything like plants or seeds or anything alive or that might become alive on account of this being an island and all, and lord knows we have enough invasive species here already. But somehow it slipped right past and I ended up at home with it without ever recollecting it was there until I unpacked. Even though it was immature, I tore it all apart and got all the seeds out and planted them anyway, but nothing ever came out of those seeds but sore disappointment and so I didn’t get to eat that last pretty crookneck squash neither. 🙁

So now we have Australian brush turkeys scratching up the whole garden, digging holes and looking for witchetty grubs as they are called, while making a pure havoc out of my veggies and witchy herbs. I’m not sure why they call them witchetty; they don’t seem especially witchy to me or of any use in making potions, although the original custodians of this land loved to eat them and they are supposed to be full of protein and quite delicious when fried up, a regular crunchy snack of a more Australian flavour. Probably tastes like fried chicken. They are pretty good eating raw right out of the ground too I guess, if you’re a brush turkey.

Now I need to figure out how to run those turkeys off from my garden, and all without offending their delicate poultry sensibilities seeing as how they are a protected species and all. And they know they’re protected, too. I saw one the other day walk right out into the street pretty as you please, just knowing nobody would dare to run him over, although he did look both ways before crossing. All in all I reckon those brush turkeys ain’t quite as bird-brained as you might first think.

Anyways, being a bit of an invasive species here myself I’d be much obliged if anybody has a good spell for keeping brush turkeys out of your garden while at the same time making them think it’s their own idea to leave and go looking for their witchetty snacks somewhere else. They are protected after all, unlike the poor dug up veggies in my garden. 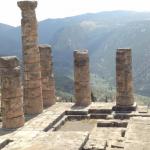 November 9, 2017
The Corner Crone: When the Gods Fell Silent
Next Post 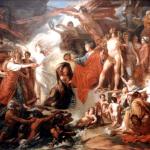 November 18, 2017 The Hearth of Hellenism: Paganism & the End of Religious Extremism
Recent Comments
0 | Leave a Comment
Browse Our Archives
Follow Us!

The African River Horse
The unpredictably violent and massive hippopotamus, whose name derives from the Greek...
view all Pagan blogs
What Are Your Thoughts?leave a comment
Copyright 2008-2020, Patheos. All rights reserved.