The Corner Crone: Nobody Expects the Fires of Transformation!

The Corner Crone: Nobody Expects the Fires of Transformation! August 1, 2019 Martha Kirby Capo

Apologies to Monty Python aside, I’ve been thinking a lot about transformation these past nine months while I’ve been gestating in the Tower (you can read more about this here and here).

You know when the nurse holds up the syringe and tells you “this might sting a little bit”, and you think to yourself “well, that’s just an itty bitty needle; how bad can it be?” and then he plunges a burning liquid into your body? And you shriek “HOLY GODS, what the cluck is THAT!?”? That’s pretty much been my life.

We’re post-move now, really post-move as in everything has pretty much found its new spot in the new place. Just starting to settle. My altars and shrines are back up; I’ve found to my delight as I’ve tumbled out of the Tower and landed here in Florida that I’ve got room (and privacy) to create an outdoor altar for full moon rituals as well as an indoor altar to honor Hekate on the dark moons.

So, spit spot zip zap I’m all squared away. New beginnings. No more surprises. I got this!

And then, this morning—while making my coffee and thinking of how I would hold my first ritual to Hekate in this new house later tonight—I looked over at the microwave and realized that the paper towel I had put over a bowl of food to prevent splatters was merrily burning away. In 40 years of putting all sorts of things into all kinds of microwaves, I have never had that happen.

Was the appliance particularly greasy? Nope, we’ve only been in residence 15 days and at any rate I completely cleaned the interior the day we moved in (because I’m THAT person). Machine on for far too long? Nope, 15-20 seconds, max. So, what the cluck was THAT!? Random chance; move on and get to the next thing? Or do I stop and think about what possible meanings, what new learnings I can glean from a paper towel self-immolating in my microwave?

I think sometimes young-in-the-craft witches expect that opportunities for deep insight—those “aha!” moments when the kaleidoscope through which we view the world quarter-turns and everything changes — are hyper-saturated moments when all the elements are just so.

A crisp fall night under a shining full moon scudded with boll-weevil clouds whose gauzed shapes are bursting with Important Secret Messages only accessible to those with the Sight. A snap of thunder or gasp of lightning at Just The Right Moment. A whorl of scattered scarlet leaves lifted up from a woodland path whirling like an autumnal dervish. Something impossible to miss; a singular event that seems to authenticate that yes, Ye Be A Witch.

OK, I’m over-stating . . . a little. My point is if we’re waiting for some sort of Hollywood moment to activate our acts of self-reflection, we’re missing a lot of opportunities for transformation. Self-reflection is part and parcel of claiming yourself as a Witch. Utterly knowing ourselves—as much of ourselves as we are able to know—allows us to be effective agents of change, magical and otherwise.

I’ve written about magical thinking and self-delusion before, those alluring hand-maidens of Ego, and in my own Way of the Witch I try to be aware of my tendency toward self-seduction. And of course, sometimes a cigar is just a cigar. But this morning’s unexpected flaming paper towel was an out-of-the-ordinary, albeit mundane, event. It very much caught my attention (as you may well imagine), and part of my Practice is to examine any meaning that might be revealed in the things that catch my attention. So, what magic learnings revealed to me?

The Fires of Transformation Can Blindside You

If this past year has taught me anything, it’s that the unpredictable is usually a short, soft sigh away. Although some Witches think in terms of controlling the forces around them, I am more inclined to think in terms of working with the forces around me. There are plenty of things beyond my control, which (in my opinion) is as it should be. My spellwork has more success when I seek to understand the structures of natural laws and then work within those systems. Maybe your experience is different—Witch, You Do You—and more power to you if that is the case; I’m only claiming my own truth here.

When some unpredictable disaster happens, turn off the power (try not to let it suck in all of your energy) and try to respond a little more proactively than reactively. Again, sometimes you won’t be able to have enough control to do this. If we claim to have agency over ourselves, though, then we recognize we always have a choice as to how to respond to events around us. Granted, sometimes all the choices that may be available to us are not great—but we still have them.

No Matter How Carefully You Think You’ve Cleaned Up, There’ll Still Be Ashes

As I watched the fire burn itself out I was feeling a little smug about how calmly I handled the crisis. No screaming, no panicking, no shock—I was Ms. Rational Witch, making reasoned decisions and taking deliberate actions. Turn off the power, don’t introduce fresh oxygen to the enclosed space (and yes, I know it’s not a vacuum in there)—fire goes out easy-peasy.

Then I opened the door and the ashes took off like newly-freed fairies eager for a romp in the meadow.

When we come out the other side of the fire—when we exit (finally!) the Tower—our first inclination is to check to see if we’re still emotionally, spiritually intact. How has our belief system withstood the ordeal? Are we still essentially who we were before our trials began? And if not, how exactly have things changed? How have I been changed?

Like specks of scattered soot, those answers may not be readily apparent. We may give our psyches a cursory once-over and decide we came through unscathed, been there, done that, never doing it again. Or our transformation may be achingly apparent, impossible to miss. Or we may find ourselves somewhere in between—we know something’s different, but we are as yet unable to contextualize that difference. Like that one last micron of ash, it’s there—it’s new to your internal landscape—but you just can’t quite seem to define its parameters yet even as you know you have been changed. You’re different now.

My husband once told me I think too much, and he’s not wrong. Thing is, I’m OK with that.

I believe there’s a connection between the unintentional fire that essentially set itself in my kitchen this morning and the intentional fire I will be lighting tonight in my cauldron at my Hekatean altar. Am I being reminded that while I feel like my life is finally back under my control after these last disastrous months, it really isn’t? That control is an illusion that routine dulls us into believing we have?

It wasn’t until today that I realized nine months—that period of human gestation—have passed since the one-two punches of Laura’s unexpected death and my husband’s unexpected career change. That realization brings with it the possibility that perhaps I haven’t been trapped in a Tower time; perhaps I’ve been struggling in one of the wombs of the Universe. An active child eager to be (re)born but needing to stay put and sink into the isolated environment in which I found myself. Needing to be still long enough for the Anima Mundi to nurture me until I could regain the energy to once again nurture myself and find my new center of balance.

Perhaps I, too, am like that flake of unseen ash. I’m here now, changing the landscape in ways as yet unforeseen. As yet indiscernible. Stubborn. Elusive. 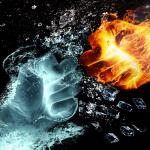 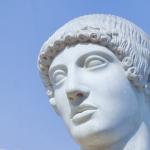 August 2, 2019 9 of Beagles: Alcoholism
Recent Comments
0 | Leave a Comment
Browse Our Archives
get the latest from
Agora
Sign up for our newsletter
POPULAR AT PATHEOS Pagan
1