So often we hear or read rhapsodic stories of personal encounters with deities. Be they ecstatically joyful or mind-blankingly terrifying, either way the unmistakable presence of the Great Unseen, The Unknowable, is the Alpha and Omega of the experience.

And while these experiences may sometimes coincide with Ritual, it’s just as likely that these electric moments of hyper-connectivity with The Divine might come “whop you upside the haid” when you least expect it.

That’s what happened to me at last week’s Florida Pagan Gathering.

Multi-day Festivals, as many of you are aware, have the positive (though, for some of us, itchy and uncomfortable) effect of disrupting our daily routines, rupturing the necessary and repetitive minutiae of the habits that maintain our status quo.

In a very real way, the breaking open of physical routine is a critical component of breaking open metaphysical landscapes as well. The soil of your soul is freshly tilled and overturned, opened up to receive new wisdoms, new knowings.

It’s not quite “what happens in Vegas”—or maybe it is for some folx—but there is an element of otherworldliness that can settle upon a chosen community as the days and nights wheel on. An other-ness that cracks you open without your being fully aware of it until something—some Thing—slips in.

I met another Laura in these first few days after the first anniversary of my Laura’s death. We had had a few interactions through social media (Keeping Her Keys and Open Circle) but had never met face-to-face.

To say I felt an instant kinship would be vastly understating the level of connection I felt. As the week passed, time and again I was struck by the sure Knowing that I had been gifted with another Laura in my life—not a replacement—never that—but a person who seemed to be a Sister From Another Mister.

There were even a couple of times during the week when we found ourselves spontaneously responding to another person’s question using the exact same phrases at the exact same time, much like folx who have known each other for years often do. Happy circumstance? Magic? A little of both? One in the same?

I’m a personal deity chick; whether it’s Anima Mundi or Hekate or the Great Oversoul, with its roots in Transcendentalism, a foundational tenet of my spirituality is that we are [insert your Word of Choice for The Sacred here]’s hands on earth. However we experience the Sacred, That Which Is Ineffable, if we are people who walk our talk then we express (or give corporeal life) The Ineffable through our actions. We give It life, so to speak, as It gives us life.

Pagans, Earth-centered Folx—we’re mindful of recycling, heedful of our carbon footprints, we aim for a certain parsimoniousness with respect to our energy consumption. We’re Earth’s methodology for doing that. There’s a planetary “scrubbing” system, yes; but we humans have a responsibility to do what we can to help. Paganfolx take that responsibility pretty seriously.

As a Hekatean, I also take seriously my Call to serve as a Guardian, Guide and Gatekeeper for others around me. It’s how I am Her hands on Earth; it’s how I bring Her life just as She bring life to my own existence.

Framing my interactions with the world through these three functions has become second-nature to me, in fact so much so that when something unexpected happens—when some new element lances through my routine—it takes me a few days to assimilate that new Knowing.

So, what does all this yammer have to do with meeting a new person at a Pagan Festival? After all, that’s part and parcel of the Festival experience. No surprises there. Ho-hum. BFD.

And yet I would say that not every brush with Deity is otherworldly. If we dismiss those times when Deity stretches out an actual physical hand through the unexpected touch of another as being too “mundane”, too common to be magical then We Are Missing It.

Byron Ballard urged folx during one of her workshops to not think of returning to their post-Festival routines as going back to the mundane world. Magic, she asserted, is around us all of the time. Rituals, extended communion with like-minded people, are what Maslow terms as peak experiences, and don’t get me wrong—I love a good, juicy Ritual. But you don’t need to make some sort of cosmic reservation for your magical experience. Magic really is all around us, all of the time.

It was around me when I listened to Brian Henke’s heartbreaking ode to his own dead sister that he happened to sing, To The Air, which seemed to so clearly articulate my own experience:

If I could hold you again
I would hold you.
I would tell you
How much that I care.
But instead
I will say that I love you
To the air.

As I sobbed through his song, one of the ranch dogs trotted over and spent some time by my side. A little black one. And, as some of you know, black dogs are sacred to Hekate. I looked up and saw a small flock of egrets on the wing, their impossibly white feathers burnished and limned by the sun against a cerulean sky.

I have to say that in those few moments, honestly, I didn’t feel a thrill of “Aha! The Goddess is afoot!” I was centered in my grief, which is where I needed to be. If anything, I had the sense that the Goddess was simply standing alongside me, standing as a Companion, not relieving me of my grief or chivvying up my spirits (“Buck up, Lassie; she’s moved on and so should you”).

No, She was simply standing alongside me in the form of a grubby small, black dog in need of a good bath with plenty of soap and very likely a tick dip as well. Simply standing as Companion as a flock of snow-white birds, soaring high and free and unbound, wheeled into the great unknown as Brian sang “I will say that I love you to the air.”

Happy circumstance? Magic? A little of both? One in the same? 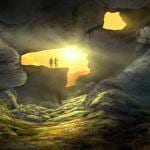 November 14, 2019
Irish-American Witchcraft: The Dragon Prince - What High Fantasy Can Be
Next Post 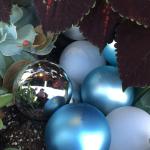 November 16, 2019 Druid in the City: Seasons in the City
Recent Comments
0 | Leave a Comment
Browse Our Archives
get the latest from
Agora
Sign up for our newsletter
POPULAR AT PATHEOS Pagan
1