The full moon rose, large and luminous and glowing, flaming in the twilight, as creamy as buttery-fresh milk. Up, up she rose through the latticework of the oak trees, framed in a tangle of criss-crossed branches and cotton boll clouds. And there stood I, physically alone in my sacred grove of oaks and palms yet profoundly connected to All That Is with a vibrance I hadn’t experienced in a very long time.

Lo these many moons ago, I started my spiritual journeying as a Solitary in part because I was very much in the closet at the time. I was raised in the Episcopal church and my husband was raised Catholic. Our families of origin had already been dismayed when we joined our local Unitarian Universalist congregation (my father-in-law told us we could do whatever we wanted but for God’s sake do raise the children as Catholic and by the way when were we going to start having some?).

To tell them I went out to my stump every full moon, threw a salt Circle, lit my candles and sent my energy blasts out into the world? Yeah; no.

Children did eventually happen, and for 15 or so years my Practice languished, tossed into the back of my spiritual closet somewhere behind everything else that crowded to the front for my attention. I became what Jason Mankey and others have described as an “armchair Pagan.”

Then came my 40th birthday.

I happen to have been born right around the Winter Solstice (as was my younger son), and that year I ended up having emergency surgery to stop a bleed-out the night of my younger son’s sleepover birthday party.

You don’t really need to know all the details; suffice to say it was one of those Force Majeure convergence times one experiences occasionally. For most of us, those times result in self-examination and making some real changes in our priorities. Kind of like the current times.

Twenty years and three cross-county moves later, after pretty much shelving my Solitary Practice in favor of group settings and wending my way through Covens and Kindreds and large group Workings, and just as I was getting to know the local Pagan community, I find myself now Solitary again not as a choice but as a mandate.

And it’s been a sort of silver lining reawakening to the depth of my personal agency and power.

Don’t get me wrong—there are lots of Rituals going on through Zoom and Facebook (Lots! It’s very people-y out in the interwebs these days), and the ones I’ve attended have helped me to feel very connected to the larger community. But I also have to admit that I’ve found myself re-examining the state of my own Solitary Practice these past few weeks.

I find my mindfulness has increased.

I’m pretty sure most of us go through spiritual doldrums every now and again when what we’re doing might lean a little more toward going through the motions and a little less toward working with focus and intention, and I’ve been looking at that. But (for me) this re-examination has also been focused on how I’m living out my Solitary Practice away from the altar, in the days and nights between the full moons and the dark moons.

So I’ve been intentional about imbuing my everyday life with a magical mindset. I already knew intellectually that magic isn’t the sole purview of festivals and ritual; these last several days I’ve been creating heart-space for spiritual and/or emotional experiences of that Truth as I go through my routines. I’m pretty sure that this approach is what led, at least in part, to such a profound experience under last night’s full moon.

There’s an old joke (it’s funny because it’s true!) about folx who go to church and then the minute the Service has ended they’re in the parking lot and back to their regular behaviors that are not all that grounded in loving their neighbors as themselves. For me, that’s kind of what happened with my Practice. It had started to turn into something I had begun to leave at the altar for a couple of weeks until the next time.

Now I’m in the process of reclaiming my Solitary Practice, spooling it out from my altar and threading it through my days, weaving a net of magic that is tensile, strong, and ever-present. I’m expanding my senses to experience the world as my altar. There’s a saying that God is too big for one religion, and the same can be said of magic: it’s too big to be kept on the altar. Even after 30 years on the Path, I had forgotten that.

Perhaps you did, too.

If you work in a grocery, a hospital, in city services, in the armed services, in the food and farming industries, in delivery services or with the postal services—any of you who are daily risking your lives and the lives of your families and loved ones during this pandemic: please know how profoundly grateful I am for you. I am keenly aware that for some of you, working during this time is not a choice. I am keenly aware that the ability to self-isolate is stained with undertones of privilege. Gratitude matters. Kindness matters. And you, you matter.

May You Be Well.

April 7, 2020
The Balancing Path: Not All Meditations Are Created Equal
Next Post 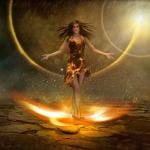 April 14, 2020 The Balancing Path: Magic is Will vs Will
Recent Comments
0 | Leave a Comment
Browse Our Archives
get the latest from
Agora
Sign up for our newsletter
POPULAR AT PATHEOS Pagan
1