The subject of fairies and modern technology is an intriguing one, and one that encourages some good discussion and debate, often predicated on the individual’s personal understanding of what fairies are. I’d like to dig into some ideas around this concept here, with the understanding that I’m speaking from my own view of fairies as diverse groupings of beings within folk belief that have always interacted with humans, can be human-seeming, and can interact tangibly with the human world. Obviously other people’s opinions may vary.

While there is often a tendency to view fairies, et al., through a heavily anachronistic lens we do have some precedent for the idea of these beings interacting with or interfering with human technology. A quick look across folklore shows us that fairies have a long history of using or borrowing human technology, contemporary to the time periods of the stories. For example Briggs in her various works discusses the motif of fairy borrowing, including references to stories where fairies would borrow hand mills, a type of small hand-held grinder, which was the cutting edge technology of the time. At the least this demonstrates that the Good Folk have had an interest in new human tech, an ability to adapt to it, and desire to acquire it.

Another pertinent example here are Gremlins. Gremlins – not the movie sort – are a type of fairy being that we first see appearing in the First World War reported by military pilots and mechanics. They would damage planes and other human machines, cause general havoc, and all sorts of mechanical problems. If you are familiar with the old Twilight zone episode ‘Nightmare at 20,000 Feet‘ where the plane passenger sees the gremlin trying to sabotage the engine midflight, that encapsulates the folklore reasonably well.

There is certainly an idea shared among many people I’ve talked with that ‘tech fairies’ are a thing, perhaps as a kind of ultra-modern ghost-in-the-machine type gremlin. This is a term that is applied to the sort of random tech weirdness people experience that can’t be easily explained and so is personified; since it is along the lines of fairy mischief, harmless and malicious, that we find across stories this personification is labelled ‘fairy’. My own experience with this ranges from tech inexplicably failing right before I could post things discussing deeper personal gnosis around fairies to an auto-fill on my phone that seems to be possessed by some sort of spirit. Are these modern aspects of fairies or something else? I don’t know but it is definitely interesting to contemplate.

One aspect of fairies intersecting with modern technology is something I have taken to calling fairy propaganda, that is the flood of online material aimed at presenting fairies in a particularly appealing light. This is of course violently at odds with existing folklore, folk beliefs, and older folk material which paints fairies as, at best, mercurial and ambivalent and requiring caution to approach or deal with. We can always argue that this material is purely human in origin and represents the current zeitgeist surrounding the subject, but if I were one of the more dangerous fairy beings I’d definitely be encouraging the flood of novels showing the Unseelie as the secret good guys or more widely the material depicting fairies as benevolent and wholesome because that can only help open humans up to that very danger.

A more important and possibly insidious – although of course theoretical – aspect of this discussion is the idea of enchantment via technology, that is that the Good Folk are intentionally using human technology to influence people. This is rooted in the very old idea of fairies using glamour* or magical enchantment to deceive and influence human perceptions, to lead humans into specific actions, or lure humans to a specific purpose. The idea of glamour is then combined with technology, particularly social media and videos, giving us the possibility of casting magic through the medium of media.

Although not necessarily fairies (or perhaps they are of a sort) the Hellier phenomena may fall into this category. My friend Seo Helrune has written in more depth specifically about Hellier so I won’t go too much into it here, but I will say that the beings that the crew of the show seemed to be encountering fit the broad characteristics of what I would call a type of fairy like being and that I saw several people talking about feeling compelled to watch the show and also having a noticeable uptick in activity apparently related to the same sorts of beings in their own lives after watching. It is an intriguing phenomena.

The idea of fairies in technology and fairies using technology are nascent ideas as far as I know within the wider concept of fairylore. Yet as humans move forward and become more and more technology driven I believe that we will see an increase in stories and discussions of fairies, in various guises, associated with human innovations. As much as I advocate for a clear understanding of the difference between folklore and fiction I do think this is one area where urban fantasy can help us broaden our minds away from the rigid expectation that fairies must be primitive and even technophobic. Listening to modern anecdotal accounts from people who have experienced these beings is also very useful and shows a small but important pattern of stories that mention fairies in modern dress, in modern cities, and using or familiar with things like cell phones, computers, and cars.

If there is one thing that folklore does show us clearly it is that the fair folk have always evolved as humanity has evolved.

*glamour: basically a kind of illusion that can fool the senses, causing humans to perceive a plank of leaves and acorns as a feast of delicious food for example 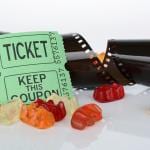