I first wrote about using magic in politics back in 2017, but the history of magic being used as a tool by people who feel oppressed goes back much, much further than that. What made 2017-21 stand out was the confluence of a growing political divide in the lens of social media. Practitioners from both extremes of the political spectrum jumped into that chasm.

Author Sarah Lyons stands out with Revolutionary Witchcraft: a Guide to Magical Activism, a book that is incredibly helpful for connecting the dots between activism and magic. Being a journalist precludes me from being an activist, but I thought I’d interviewed enough of them to have an understanding of their tactics. I now understand that I knew much less than I thought I did. Lyons lays out some of the specific techniques activists use to identify the problem, understand the currents of power that are involved, and agree upon specific targets and actions. I have a much deeper respect for how this work is done after reading Revolutionary Witchcraft. 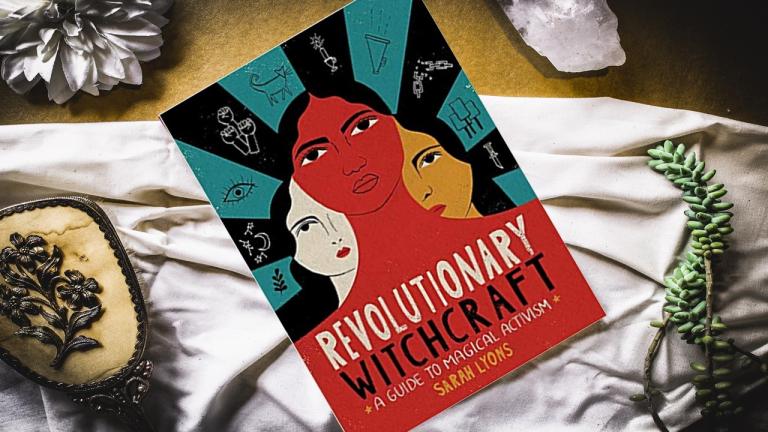 Someone who is a seasoned activist but only knows witches in passing would also learn a lot by reading this succinct book, which comes in at around 150 pages with appendices, and is small enough to bring along to meetings as a reference. I find the discussion on the nature of magic to be really well written. There are no pithy definitions that I can point to as an example, but I found myself nodding in agreement as I read about using thoughts to influence events. It’s phrased to help a reader unfamiliar with magic recognize all the ways that magic is being used, intentionally or not.

Making this book especially useful is how magic and activism are connected in the examples. Here, the reader will see how spells can be honed through the injection of a more activist process, and how actions can be juiced by aligning intentions metaphysically as well as physically. Some of these are drawn from history as it’s unfolding, and others are scripts to get readers started. These include, among many others, the invoking of ancestors by early AIDS activists, and a rite of remembrance for trans dead that is in current use. Ancestors and other spirits play an important role in Lyons’ magical practice, and between these covers is a really excellent ancestor elevation ritual that is worth the $16.99 cover price on its own. There are also sections on how and why to meditate, the crafting of sigils for activist magic, the role that shape-shifting plays in a witch’s reshaping of the world, and techniques for being able to see the lines of influence and power that must be disrupted to effect a given change in the world.

If this was just a book explaining how witches use magic, I’d say it’s one of the clearest on that subject. Based on how much I learned about activism while reading it, I have to think that Revolutionary Witchcraft is also an excellent primer on activism. One might be able to use this just to become a more effective leader of protests and or learn how to effectively cast spells, but I urge anyone who picks up this book to do more than that. Magic and activism are both tools, and this is a guide to multiplying the results of each of these tools by merging them. Most readers will need to get out of a comfort zone to make that happen, but if there was ever a time when discomfort was warranted to change the world, it is now.

Quirks: Lyons takes pains to share personal beliefs on the nature of magic, money, language, and a number of other topics that directly feed into activism and magic. That’s a breath of fresh air. It’s really easy simply to write out the instructions and not bother providing any rationale. That turned me off from most of the books that were available when I was younger. I lift this up as an example of a better way to write a book.

Quibbles: There’s one bit of advice about the disposing of the remnants of a spell: “throw them in a storm drain by a crosswalk.” Please, no, never do this. In most parts of the United States, there are separate sanitary and storm sewer systems, which means that the poop and waste we flush down toilets and drains gets run through a sewage treatment plant, but the runoff going through the grate in the street flows directly into the nearest stream or river. Anything thrown into a storm drain is polluting the local watershed. This is not in keeping with culture of stewardship and respect that the author otherwise recommends, and I assume it was not intentional. I also think it’s worth pointing out just to keep people from turning their magic into more pollution.

August 2, 2021 Phoenix Rising: Review - “A Brigit of Ireland Devotional: Sun Among Stars”
Recent Comments
0 | Leave a Comment
"I needed to read this. Thank you so much for sharing this. <3"
Laurie Allen The Corner Crone: The Parable of ..."
"I'm going through a bit of an existential crisis with my own devotional polytheism. As ..."
Heather Havens Salt City Pagan: Facing the Full ..."
"Another post written by someone who hasn't actually read the mythology they are talking about ..."
Kris Hughes The Rantin’ Raven: Who Was Mabon?
"What has always worked for me -- e.g., with no negative blowback that I have ..."
Cathryn Meer Bauer Radical Pantheist: Defining Unethical Magic
Browse Our Archives
get the latest updates from
Agora
and the Patheos
Pagan
Channel
POPULAR AT PATHEOS Pagan
1

What It Means To Put Your...
John Beckett
Related posts from Agora