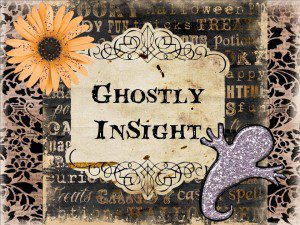 My own ghostly encounters happened when I was only three years old. The ghost didn’t look anything like what is portrayed in movies. It didn’t look like Casper the Friendly Ghost. Nor did it look like a monster. Instead, it was a young girl dressed in a long dress and bonnet who looked lonely and wanted to play.  From then on the ghosts that I spoke to were referred to as ‘imaginary friends’ by my family. But they were far from imaginary – I could make out every single detail about them and I could communicate with them.  My encounters with ghosts and spirits have continued and is a big part of my life. I speak with loved ones who have crossed over – some are ghosts (an earthbound soul that hasn’t crossed) and some are spirits (a soul that has crossed over to the Other Side).  All have stories. Not all want to talk, though, and I have never encountered any ghosts that said ‘boo’ or rattled chains.

Just last night I got up to use the bathroom. The time on my phone read 1:15 a.m. Both of my kids were at their dad’s house, so when I wandered to the bathroom and heard voices in my son’s room I was a bit confused. Nobody was here. It wasn’t a television or radio and it was distinctive conversation from what sounded like four to six people all who had Victorian English accents!  I sorely wanted to investigate, but was both tired and a little scared, not so much of seeing them, but of interrupting their conversation and possibly frightening them away. So I went into my bedroom and put the blankets over my head and fell asleep. Yep, I get scared too.

Many people believe that the veil thins during October and the Halloween time. I am quite busy with the paranormal all year round, but I do get more calls this time of year asking for assistance. I believe that if you are having an encounter now, you probably were having it a month or so ago but all the movies and shows, etc are just raising the awareness of it. You might be listening even closer than you were a month or so ago. And just by going outside during the haunting month doesn’t necessarily equate to you being more of a ghost magnet than say February, and you won’t necessarily pick up some treats and a ghost if you decide to go ghost hunting, attend a Halloween event or go Trick or Treating.

Now there are also many reasons behind a so-called paranormal experience. It could be bugs in the wall. It could be the furnace that you just turned on that is making the floorboards and vents creak and crack. Or, it could be actually be something.

Rarely do people get hurt by a ghost or spirit, although it has been known to happen. But the number one thing I tell my clients when they feel they are having an experience are to not panic and automatically assume it is a demon. Try smudging the house with white sage or Palo Santo, ask the entity to go into the light and let it know that you are in command of your home/business.  Say a prayer, whatever feels comfortable to you, while smudging and make sure that after you smudge you open the door and make a motion as if you are pushing it out your door.  If the presence remains, call a reputable Psychic Medium and/or Paranormal Investigation Team.  However, make sure that the team knows how to document and cleanse, and that you receive references and recommendations. Don’t just let anybody in your home!

Not all ghosts are bad. And most ‘hauntings’ that I actually investigate end up being loved ones connected to someone in the family just wanting to make their presence known.

Wishing you a safe and wonderful October!

October 3, 2012 Believing is SEEING
Recent Comments
0 | Leave a Comment
"Good points! Really, instead of the fighting, we need more nature photos, and good news ..."
Sam Be a Light
"thank you for this, wish I had read it earlier last week it would have ..."
Ronnie Here Full Moon in Sagittarius
"I'm totally gonna start doing the $100 in my wallet thing."
The Great Gazoo A Lottery Winning Psychic
"I'm so sorry for what you went through, Kristy! Thank you for your message. Sending ..."
Kathy Happy Mother’s Day
Browse Our Archives
get the latest from
A Happy Medium
Sign up for our newsletter
POPULAR AT PATHEOS New Visions
1

New Visions
An Act of God
A Happy Medium

New Visions
Key to Your Intuition
A Happy Medium

New Visions
Be a Light
A Happy Medium