The Three-Dimensional Structure of the Pagan Movement

The Three-Dimensional Structure of the Pagan Movement July 17, 2012 Aidan Kelly

In writing about the history of the Craft, I have been often perplexed about how to tell a story in which everything is related to everything else, and it all seems to be happening at the same time. Iit took me quite a while to realize that an adequate description of the movement requires a three-dimensional map, much like a tapestry.

The first dimension is chronological, describing how groups evolved and proliferated over time. This dimension includes description of the “Traditions” with which the various groups are associated. Many writers have assumed that the Traditions are the major structural elements of the Craft, and have asserted that Traditions are equivalent to the denominations that demark the various flavors of Christianity (and of several other faith communities). However, as Michael York pointed out in his Emerging Network, this is a false analogy.

The denominations of Christianity are in good part quasi-governmental organizations to which local congregations belong. Each of the latter is expected and even required not to stray too far from the paradigms that define the denomination’s beliefs and practices. In contrast, a Craft Tradition (with a few exceptions) is not an organization, let alone a self-governing one. Rather, a coven’s Tradition is the name for its particular complex of liturgical practices, theological flavor, internal operational rules, hierarchic or democratic structure, and other characteristics. (I’m capitalizing “Tradition” to emphasize that it refers to this complex definition, and not to just any customs or beliefs inherited from the past.)

Usually a coven inherits this complex from the earlier coven that it descends from. However, in Wicca, and especially in the “generic” Witchcraft that does not adhere tightly to the Gardnerian pattern, any group of people has the right to create their own coven and their own Tradition, to learn how to practice the Craft by trial and error, and to be considered just as valid as any other coven. In addition, since (with a few exceptions) every High Priestess, High Priest, and coven of the Craft is autonomous, once a coven’s practices, beliefs, etc., have evolved sufficiently far away from the pattern with which it began, the coven can, and usually does, declare itself to be a “new Tradition” (which sounds like an oxymoron, but everyone in the Craft knows exactly what that term means), equal in status to any other Tradition. An example of this was Lady Brighit’s declaration in 1991 that the California Gardnerians would henceforth be an autonomous Tradition, not subject to interference by any other Gardnerians.

Given that the chronology is the warp of the tapestry, the weft, the second dimension, is the synchronic networking of Wiccan and Pagan groups within various regions, from local to national. It is this weft that provides the actual working structure of the Craft and Pagan movements. Witches and Pagans tend to interact with each other primarily within local regions around the major metropolises. As a rule of thumb, a “local area” can be envisioned as a circle around a major city with a radius representing an hour of driving time. (The various Pagan religions are urban, not rural, phenomena.) However, there have been some national organizations, and large festivals with a national attendence, that have allowed networking among people who otherwise were widely dispersed. With the Internet now, of course, conversations among people with common interests scattered around the world is a daily experience.

The first attempt to create an umbrella organization that included various Pagan religious groups occurred in 1967, only four years after Ray Buckland brought the Gardnerian movement to New York, when Michael Kinghorn founded the Delphic Fellowship in Los Angeles. However, it was not at all obvious how such an organization would have to function, and there were many trials and errors during the next decade before viable structures were discovered. What evolved was not a single organization, but several different kinds, each with different purposes, structures, and rules.

It is rare for a coven of a certain Tradition to interact only with covens of that same Tradition (except for some special circumstances). Instead, covens of many different Traditions within a local area, as well as some other varieties of Pagans, will work together on projects or problems of mutual interest. The leaders of these groups will tend to get together to talk shop and in that sense may function as a local Council of Elders, always with the understanding that they can only advise and suggest, as is always the case when one is dealing with voluntary organizations. Still, persons who engage in behavior that Witches and Pagans regard as illegal, immoral, or a violation of Craft ethics can be ostracized by the consensus of such a Council, when that decision is carried back to the individual covens, grove, or other groups.

Some major types of networking organizations are open to Pagans in general, some only to Witches. Some are local associations of covens that cooperate to put on the annual cycle of the eight Sabbats. Some are associations or committees that organize and produce an annual festival. Some are associations of covens or Pagan groves that have incorporated as churches in order to give their members the legal benefits that such a church can provide. Some such organizations are closely associated with a specific Tradition; others are not. There are also political action committees and organizations focused on defending the religious rights of Pagans and Witches as American citizens.

Yet even these distinctions are not absolute. There are no significant differences between a large local Sabbat and a small regional festival, in size, in the rituals performed, in other activities, or in the types of people who might attend. Further, a local networking organization can evolve into a new Craft Tradition. This often happens when several local covens pool their scripts for Sabbats and work out a compromise version that all can participate in. Within a year or so, this new script may become the basis for a new Tradition. This is precisely how the Keepers of the Ancient Mysteries Tradition was created in the Washington, D.C., area about 1971.

The third dimension of the tapestry consists of the network of friendships among Craft and Pagan leaders. In The Emerging Network, Michael York pointed out not only that Traditions provide neither the organizational structure nor the decisionmaking processes that tie the Pagan movement together, but also that decisionmaking is carried out, usually informally and always by consensus, by leaders who have known each other for decades and who try to keep in touch, which is much easier to do with the help of the Internet than it was before the mid-1990s. The network of leaders is like a web overlaid on the tapestry.

To explain the observable patterns, Michael York used the Segmented Polycentric Integrated Network (or SPIN) model, which was developed by sociologists Luther Gerlach and Virginia Hines for describing the structure of some completely different types of social organizations, because he could see that the model applies to both the Pagan and the New Age movements, and to Western Magical Tradition manifestations in general. As J. Gordon Melton has emphasized, the Western Magical Tradition is best understood as a complete religious tradition in itself and is therefore the ontological equivalent of Christianity as a whole, with all its variants, denominations, heresies, and theologies. The model, and the Western Magical Tradition, is polycentric: it has many centers of power and authority, not just one or a few. The model can accurately describe the functioning of a network that is nonhierarchic and has no central authority, that instead has many small nodes of authority embodied in the movement’s leaders. These individuals interact with one another as equals in a continually shifting and evolving pattern, and “groups” are merely the concentric circles that one can draw around each individual in the network.

The Craft and Pagan movements have been criticized for not being able to maintain stable social structures, i.e., big churches. However, both movements appear to value individuals more than organizations. In traditional Western religion, the church persists, and individuals come and go. In Paganism and other manifestations of the WMT, individuals persist, and organizations come and go. It has been estimated that the average lifespan of a coven is about two years, although some covens have persisted for decades. In addition, some covens rename themselves whenever there has been so much turnover of membership that the group’s energy feels significantly different to its members, in which case it is a matter of opinion whether the coven with a new name is still the same coven or not. Knowing that the SPIN model applies to several different kinds of social structures thus helps us see that the Western Magical Tradition and its manifestations are perfectly normal; they simply obey their own rules.

The preceding is a somewhat rewritten excerpt from the general history of the Craft in America that I’m getting close to finishing (at least Volume One). I’m going to call it A Tapestry of WItches. 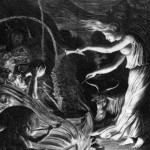 July 19, 2012 A Pagan Almanac: Day One
Recent Comments
0 | Leave a Comment
"I think this is lovely <3"
M.J. All the Prophets Say
"Reading this in 2021. Wondering if, after nearly a decade, how much of this still ..."
Lady Tam Li Hua What Is a Witch?
"Aidan, it's been two years. Are you still with us?"
Baruch Dreamstalker An Overview of My Life and ..."
"where's part four!?"
rainaelf A History of the Craft in ..."
Browse Our Archives
get the latest from
Pagan
Sign up for our newsletter
POPULAR AT PATHEOS Pagan
1

Hoodoo How We Do: Underwear Spells
Voodoo Universe
Related posts from Aidan Kelly: Including Paganism