If Pope Francis Covered Up Sexual Abuse, Now What?

It’s Sunday morning and we’re getting dressed for Mass.

Our son, three years old, is practising the Sign of the Cross in the other room and I can hear him muttering various configurations of, “Father, Son, and Holy Spirit” to himself as he vigorously waves his arms around his body. He’s been practising all week and occasionally exclaims loudly—“Daddy!”—when he gets it right. He’s pretty proud of himself, and we’re proud too.

He picks up on these things, see.

The other day, at morning Mass, he asked me if he could have my rosary to play with. Of course, I said, and fished it out of the bag I was carrying to give to him. It was then that I noticed the woman behind us, praying, her own rosary dangling over the pew in front of her. I watched, enamoured, as our son climbed up on the kneeler and began to pray the same way, looking back repeatedly to make sure he was doing it right.

The woman and I exchanged a warm smile and a chuckle. He was learning through experience, through exposure, through the holy Catholics around him. And it’s brilliant to see him grow like that.

At breakfast this morning he prayed, all by himself.

I was making coffee in the kitchen and heard him.

He prayed for Mummy (away with his sister on a trip), for the oatmeal I’d cooked him for breakfast, for the city bus ride we’re going on later today for his birthday. I peeked around the corner to see his eyes closed, his hands folded, and his head nodding in earnest to emphasize each item in his litany of things a three-year old was thankful for.

He’s learned this through us, through being around us.

This morning, between cooking oatmeal and making coffee, while our young son prayed and played in the other room, I read the news that a former apostolic nuncio, Archbishop Carlo Maria Viganò, is alleging sexual scandal and cover-up right to the very tip top of the Vatican hierarchy, to Pope Francis himself.

That the Holy Father was implicit in the extensive cover up.

In an absolutely damning 11-page statement he alleges that Pope Francis not only knew about the accusations of disgraced Cardinal Theodore McCarrick but that he worked to remove restrictions placed on the Cardinal by Pope Benedict XVI, placed McCarrick in a role of trusted advisor, and vetted those not willing to be complicit with the cover up.

Archbishop Viganò writes that Pope Francis once asked him what McCarrick was like in order, says Viganò, “to find out if I was an ally of McCarrick or not.”

Pope Francis, he says, was an ally to the sexual predator and covering for his behaviour. Without a doubt.

If Viganò is telling the truth, and we have no reason to think that a retired Vatican diplomat wouldn’t be, this scandal is nothing short of earth-shattering. It implicates the hierarchy of the Catholic Church to the very, very top. To the Pope himself who seems no only complicit in covering up sexual abuse but of nefariously screening out those who wouldn’t go along with it, only acting on the long-proven accusations when his hand was absolutely forced by media scrutiny.

And the scariest thing, for me, is that it goes to character.

When the scandal in Pennsylvania broke we had no doubt that those priests and bishops involved in covering up the abuse were monsters. We condemned them in the strongest possible terms and called for their resignations, as we should. It is a horrible act to abuse anyone, it is almost a more condemnable act to work to try and make that abuse go away, to cover it up.

And here is the Pope, accused of the very same thing.

The Pope who is open and honest with the media. Whose persona is built on the ostensible warmth and welcome of Christ. Who has, in large part, enchanted the secular world with his gregarious personality and apparent opening up of the doors of the Catholic Church. However mixed his reviews might be amongst earnest and devout Catholics, Pope Francis is the loving face of the estimated 1.2 billion Catholics worldwide.

For better or for worse.

And if these allegations prove true—and, truly, they will need to be proven—this could be the most devastating blow to the psyche and spirit of the Church since the Reformation tore the Body of Christ asunder five hundred years ago.

The corruption, from then to now, is maybe even worse.

I cannot even imagine the fallout about to take place. I feel sick to my stomach just thinking about it, as if an enormous hole is about to open up in the floor and just swallow this whole scene: Myself, my son, and the train tracks he’s interweaved around my feet as I stand here at our kitchen island to write.

And that’s truly what it circles around to, isn’t it?

My son, practising the Sign of the Cross, praying to himself in private, being absorbed into the Catholic Church by learning from experience and exposure. Becoming a little Christ. But in this wretched world? Is this the place we want him to learn from? Is this the environment in which we feel safe, and sane, raising the next generation? In this wounded and, dare I say, corrupt, Church? Because, if these allegations from Archbishop Viganò prove to be true then that is what this is, at its core.

Let’s say put on our bravest face and say it out loud: corruption.

Scandal that, if true, is going to take out the Church at its knees.

I wrote, earlier, that we need to hold these church leaders to a higher account but that we, the Catholic faithful, need not surrender. And I still feel the same. We are, certainly, shaken to the core by these new accusations but even if they do prove true they don’t change the message. If the Church is corrupt we need to demand more of it, we need to work to hold those accountable for their actions, even if those actions came from the very tip top.

If these accusations prove true Pope Francis must resign.

If these accusations prove true all those others involved in the cover up, in mitigating the restrictions imposed on Theodore McCarrick and other sexually predatory clergy, must resign.

If these accusations prove true every single clergy in a place of authority over the Catholic Church needs to come dressed up on Monday morning in sackcloth and ashes and begin the process of serious prayer, fasting, and penance.

If these accusations prove true this is about to be a devastating blow to the Catholic Church, a crippling wound, and all of us Catholic faithful should begin to pray, and fast, and weep right about now.

This is about to be a movement.

It’s getting close to time for us to leave for Mass and our son is excited to show Father his newly acquired talent, his Sign of the Cross. And I know just how it will go. As soon as his feet hit the pavement of the parish parking lot he will locate Father like a finely tuned heat-seeking missile. It won’t be hard. Despite an exhausting schedule of three Masses, plus one the night before,  Father is always bustling about on a Sunday morning, smiling and greeting parishioners as he buzzes from the children’s ministry rooms to the welcome desk to his sacristy checking and rechecking that everyone is doing OK, that everything is ready for the Holy Sacrifice of the Mass, that people feel welcome.

When we had our daughter baptized we packed out our relatively small church with our Protestant friends and family. We, my wife and I, are converts and the Catholic Church is a bit of a strange beast for our relations to encounter. Without an exception, everyone remarked warmly about our priest at the reception afterwards. He works so hard, he is so kind, he is so genuine, he made us feel so welcome. Even our traditionalist friends spoke highly, “he’s so orthodox.”

Our son will find him this morning and run into his arms without hesitation. He will gleefully exclaim, “Father!” and earnestly bite his lip and scrunch his face up as he tries to remember the calisthenics necessary to pull off a successful Sign of the Cross. But he will get it or Father will wait patiently until he does despite a million other things he has to do this morning. Because that’s who our pastor is.

One of the very good guys.

One of the men in a collar capable of pulling this wounded thing of a religion through this about-to-be devastating scandal. One of the deeply holy and good ones.

But, these days, it feels like we’re very short of those very good guys. And when scandal breaks, and then more scandal breaks implicating the Holy Father himself, we are absolutely shaken to the core.

This morning our son will run, blissfully ignorant, into the literal arms of the Church, he will sign himself with the cross and beam from ear to ear at the new thing he’s learned. Then he will kneel to pray just like those around him (checking frequently that he’s doing it right) and mutter his precious, private prayers.

And we carry on. In prayer, fasting, and weeping, trusting, I guess, in what Jesus said—that even when scandal reaches the very top, even when it shakes our faith in a pontiff who seemed to be the warmest, most gentle man we could imagine, the gates of Hades will not, cannot prevail over the Church He has made of us.

And if Jesus said it, who are we to say anything other. 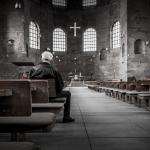 August 20, 2018
Good Priests and Bishops Must Speak Out Now
Next Post 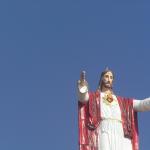 September 20, 2018 Why I'm Still Catholic (And Not Going Anywhere)
Recent Comments
0 | Leave a Comment
"Because Mark invented an historical Jesus long after the date of his fictional death. Pretty ..."
Sandy Plage Was Jesus a Myth? How to ..."
"the conundrum should be stated as, “I think the Bible says this, and this, and ..."
MR Was Jesus a Myth? How to ..."
"Did anyone living contemporary to Jesus and his apostles, or even shortly after, dismiss Jesus ..."
Bob Seidensticker Was Jesus a Myth? How to ..."
"Thank you for the article. If ever the nation state of Israel gets defeated then ..."
cyberman304 A Catholic Response to Evangelical De-Conversions
Browse Our Archives
get the latest from
The Cordial Catholic
Sign up for our newsletter
POPULAR AT PATHEOS Catholic
1 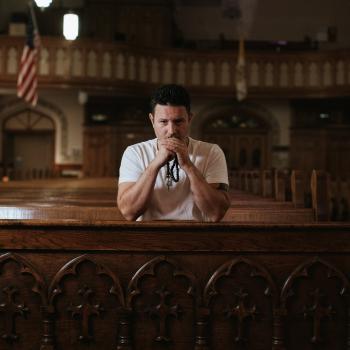 The Legend of St. Eustathius
The legend surrounding St. Eustathius tell us how he went from being...
view all Catholic blogs
What Are Your Thoughts?leave a comment
Copyright 2008-2020, Patheos. All rights reserved.