Why Catholics Sit, Stand, and Kneel at Mass

My wonderfully witty sister once remarked that I became a Catholic because I love to sit, stand, and kneel. Over and over again.

As an evangelical Protestant, coming into the Catholic Church, I was excited and enthusiastic to learn about every aspect of the Mass. Aerobics included. And I was scandalized, slightly, to learn that many of the Catholics around me—those that I’ve met as a convert—hadn’t the foggiest about why they were doing what they were doing, and what it all meant.

So, with the zeal of a new convert, and for the sake of those both on the outside and the inside, I’d like to cordially explain why we Catholics sit, stand, and kneel during the Mass.

Two Things to Know About Jesus in the Mass

Before digging in, there are two important things to know about Jesus Christ in the Catholic Mass. These are fundamental. If you know these two things a lot of why we do what we do will make more sense.

First, the priest, in the Mass, is acting in the role of Jesus.

In the Catholic Mass, the priest who is celebrating the Eucharist—who will break the bread and drink the wine—is performing all of his actions in place of Jesus. The priest is acting in the person of Jesus during the drama of the Mass.

Accordingly, we sit and stand when the priest sits and stands. When altar servers, or other priests who are concelebrating the Mass, approach the celebrating priest during any time of the Mass they bow, to show their reverence to Christ—represented by the priest.

The second important thing to know about Jesus in the Mass is the Catholic theology of transubstantiation.

Again, nothing new, but this belief explains a lot of why Catholics sit, stand, and especially kneel, during the Mass.

Why Catholics Sit During the Mass

I’ve read before that, for Catholics, the sitting position is the base of worship. This is our beginning position from which we can only ascend, to stand, or descend, to kneel.

In Mass, we begin by sitting.

We sit, likewise, when we’re listening to the first two readings during the Mass. These two readings, chosen according to the Lectionary which is followed by the entire Catholic Church, will typically come from the Old Testament and the New Testament epistles. We sit to listen to these readings, to take them in and learn from them, and to be able to relate them to what we hear later, the Gospel, for which we stand.

We sit again, after the Gospel reading, for the priest or deacon’s homily and as the celebrant prepares the Eucharistic elements to be consecrated. This is a very expectant time, charged with meaning, because as soon as the priest is ready, we rise to our feet.

Why Catholics Stand During the Mass

A Catholic Mass, as has been done for over two thousand years, begins with what’s known as the Penitential Act immediately after the priest, in the person of Christ, processes down to the sanctuary. In this profoundly rich act Catholics acclaim the ancient Kyrie eleison, asking Jesus, in English, “Lord, have mercy.”

In the Kyrie eleison we join in the tradition of the most ancient Christians by confessing our sinfulness to both God and each other—an act which fulfills the New Testament command to confess our sins to one another.

For the Kyrie eleison, and most other prayers during the Mass, Catholics stand. Standing has been the proper posture for prayer since before the time of Christ. By standing, we carry on this tradition, and highlight the importance of our prayers.

We stand, likewise, to show reverence and respect to Jesus, who is present in the person of the priest, and to whom we pray. This is the same reason why we stand in the presence of dignitaries and important people. Who, after all, is more important than our God and King?

After the Penitential Rite and opening prayers are the first two readings from the Bible. As I mentioned above, for these we’re seated, we’re listening and learning and taking it in. But then we rise, and rise we do, because next the priest or deacon reads from the Gospels.

And reads the very words of God.

We stand, rising from our base position of worship to mark the importance of this event. To acknowledge that, seriously folks, this is what God said. And that’s fairly profound.

During this encounter with the Word of God we also make a small cross with our thumb on our forehead, lips, and over our hearts to ask God to help His Word dwell in our minds, on our lips, and in our heart.

Once the priest finishes the Gospel reading he’ll kiss the Gospel, again to show reverence and respect for the very Words of God, and then begin his homily. Like the first two readings during Mass, we sit during the homily, listen and learn. We synthesize what we heard from the first two readings with what we heard in the Gospel proclamation and what the priest or deacon is now expounding upon.

Following the priest or deacon’s homily we rise again, this time to recite our Profession of Faith which takes the form of the ancient Christian creeds—either the Nicene Creed or the Apostles’ Creed.

Why Catholics Kneel During the Mass

Kneeling is, by its sheer physical appearance, the most reverent and surrendered of all the ways we express our worship—apart from proselytizing ourselves, which isn’t really appropriate or possible during a normal Mass.

By kneeling, though, we’re completely surrendering ourselves to God and humbling our spirits before Him. It’s incredibly profound.

Following the priest or deacon’s homily and the Profession of Faith, Catholics spend most of the rest of Mass on their knees, and there’s a simple reason why: Because Jesus is really coming.

Remember, in Catholic theology, and the theology of the whole Christian Church for more than 1,500 years, we believe that Jesus becomes really present in the Eucharistic elements once the priest prayers the Eucharistic Prayers which Christ taught us during the last supper.

We kneel because we know what’s about to happen and in a Mass where Catholics really know their stuff, the atmosphere can be palpable.

Jesus is on His way.

And while Catholics in the pews will remain kneeling for most of the rest of Mass, the priest will do any number of things, all of which are profoundly meaningful.

First, you’ll see him making the sign of the cross over the elements at various stages. Here he’s praying for Christ to truly come and help these gifts to strengthen us, as Christians. Then you’ll hear him proclaim the very words of Christ, “This is my body,” and, “This is my blood.” Remarkably, the priest proclaims these words as Christ Himself, if you remember.

At this point, if you’re lucky, you’ll hear a bell ring. The ringing of this bell, an ancient practice, alerts the congregation that Jesus is really here in those elements. Despite their appearance, they miraculously have become Christ’s very body and blood.

Then, you’ll see the priest and anyone else concelebrating with him, genuflect, or kneel, in reverence to the consecrated body and blood.

And, I’ll tell you, it’s profound to see grown men kneel before a piece of bread and a chalice of wine but if you really know what’s going on—if you really believe, like Catholics do, that Jesus is right there in front of you, you’d be dropping to one knee faster than you can say transubstantiation.

Once we’re kneeling we only rise again for two things which happen back to back: The Lord’s Prayer and the Sign of Peace.

With the consecrated bread and wine on the altar at the front of the Church—with the Passover meal, the Last Supper being re-presented before the whole congregation—we stand to recite the prayer that Jesus taught us, and then to offer each other peace in the phrase, “Peace be with you.”

The meaning and history behind both of these actions is incredibly profound.

Because Jesus, and the apostles in their later writings, made it abundantly clear that we should hold no grudges or sins against our fellow Christians if we’re going to approach the Lord’s Supper, the Eucharistic Table.

In fact, in the Didache, an artifact amongst the most very ancient of Christian writings, outlines an early Christian worship service—a Mass. A Mass which, profoundly, is incredibly unchanged in its present form.

In the Didache, as instructed in the Gospels and Epistles of the New Testament, room is given for fellow Christians to forgive and ask for forgiveness from each other before receive Jesus in the Eucharist.

The Lord’s Prayer, in which we ask for forgiveness and to forgive those who’ve wronged us, helps in this important, ancient process as well. We also bid, “Peace be with you,” which are the very words that Christ first spoke—the forgiving and calming words He told His apostles immediately after He appeared to them in His risen form.

These apostles, who had all, every one, fallen away from Him, are bid to have, “Peace,” and not to worry. They’re forgiven. In the same way, we forgive those around us, who have wronged us, an incredibly ancient practice, before meeting Jesus in the Eucharist.

The Rich Meaning of the Motions of the Mass

When I speak to evangelical Protestants who were raised Catholic I often hear, at least in passing, a kind of bemoaning of the lack of reverence in the typical evangelical worship service. I agree, which might be an obvious thing to say. In an evangelical worship service I’m undoubtedly encountering God—especially in the often lively worship—but then, following the music, I’m there to learn, since the sermon (called the homily in Catholic Mass) is often the high point of the service.

In the Mass, the high point is the coming of Christ, and much reverence and respected are aimed that way. And, in the priest, you have the person of Christ memorializing His actions while on earth.

As a Protestant, on a journey towards a more ancient faith, I attended Mass a few times and didn’t get much out of it. But, once I understood what was happening, once I understand exactly why Catholics sit, stand, and kneel, I was blown away.

The Mass is full of meaning and our physical aerobics, while also being good for the body, can, if properly understood, have a profound resonance in the soul too. 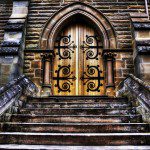 April 16, 2015
Barriers to Belief: What's Keeping Christians from the Catholic Church
Next Post 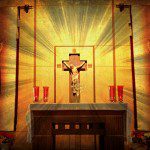 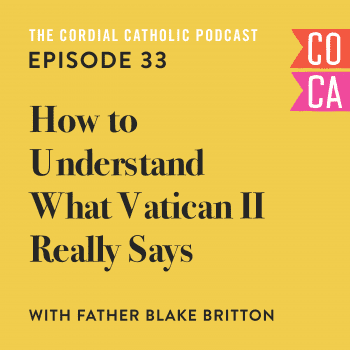 Catholic
Mass is the Spiritual Workout God Knows You...
The Cordial Catholic
TRENDING AT PATHEOS Catholic