I have found a useful tool for thinking about the Pagan community.  Most attempts to describe contemporary Paganism use lists of beliefs or practices.  Some of these lists attempt to be comprehensive, while others do not.  One problem with these lists is that they inevitably focus on those elements that the person making the list wants to emphasize.  Consequently, large portions of the Pagan community are excluded.

Another common way of understanding the Pagan community is as a metaphorical umbrella.  The problem with this metaphor is that the image of an umbrella suggest a single center.  And what the “center” is is a matter of perspective, usually the perspective of the person drawing the umbrella.

Instead of a single circle with a single center, I would describe the Pagan community, as threeoverlapping circles.  Each circle has a different center, a different focus which transcends the individual.  The three circles of the contemporary Pagan community are: earth, Self, and deity.

“Self-centric” is used here, not in pejorative sense of ego-centrism, and for that reason I have capitalized the word “Self”.  “Self” here means that larger sense of “self” which transcends the ego and even the individual.  It is sometimes called the “Big Self” or “Deep Self”.  Self-centric Paganism includes many forms of Neo-Wicca, Jungian Neo-Paganism, feminist witchcraft, and more ceremonial or esoteric forms of Paganism.  The goal of Self-centric Pagan practice is personal development, spiritually and/or psychologically, through connecting with the Deep Self.  This may be described in terms of psychological wholeness or ecstatic union with a divine “Oneness”.  Again, there are those whose spirituality may be described in these terms, but who do not identify with the Pagan community, including many New Age practitioners and ceremonial magicians.

“Deity-centered” is a term which I adopted from Janet Farrar and Gavin Bone’s book, Progressive Witchcraft.  Deity-centered Paganism includes many forms of polytheistic worship, some reconstructionist or revivalist forms of Paganism, including those which are closer to Heathenry, and those which borrow techniques from African-diasporic religions.  Deity-centered Pagans identify primarily in terms of their dedication to one or more deities.  The goal of deity-centered Pagan practice is to develop a relationship with those deities.  A sense of passionate devotion is what most characterizes the religious experience of deity-centered Pagans.  As with the other two categories mentioned above, there are many people whose spirituality might be called “deity-centered”, but who do not identify as Pagan.  They would include some contemporary polytheists who have rejected the Pagan label, many traditional or indigenous (small-p) “pagan” religions, bhakti Hindus, and many Judeo-Christian-Islamic monotheists as well, including but not limited to evangelical Christians and Catholic devotee’s of Mary. 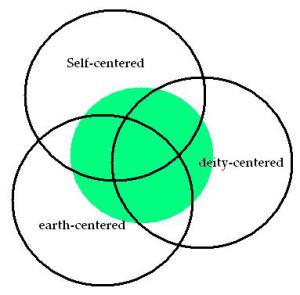 In the image above, the green shaded area represents Paganism.  No single one of the centers is privileged.  Individual Pagans and Pagan groups may identify with one, two, or even all three of the centers.  (Note, the overlapping area of the three centers is not intended to imply a central or “core” Paganism.)

Because contemporary Paganism is so diverse, the more inclusive ways of describing Paganism tend to group individual Pagans together with others with whom they share little commonality.  This is one reason why there is so much conflict over the definition of “Pagan”.  Individuals respond to this by either opting-out and rejecting the Pagan label, or by attempting to define the term in a way that excludes those they are uncomfortable with.

One advantage of of the “3 centers” approach is that it recognizes both the similarities and the differences among contemporary Pagans.  On the one hand, individual Pagans can identify with one or two of the centers, without having to identify with all three centers.  On the other hand, the three centers approach also recognizes the overlap between these groups.  For example, some feminist Goddess worshippers might overlap with both earth-centered and Self-centric Paganisms.  Likewise, some forms of animism might overlap with both earth-centered and deity-centered Paganisms.

The three centers described above correspond to three chapters in Graham Harvey’s book, What Pagans Believe, which describes Pagan practices in these terms: “Celebrating Nature”, “Working Magic”, and “Honoring Deities”.

Finally, the three centers correspond to three different reactions to Christianity.  Earth-centered Pagans reject the “other-worldly” focus of Christian eschatology and the dualistic separation of matter and spirit, as well as its anthropocentrism.  Self-centric Pagans, challenge the Christian condemnation of the body, sex, and the feminine, and seek to reclaim these.  And deity-centered Pagans, reject monotheism and all it implies.