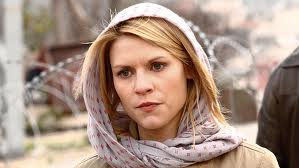 Recently, I watched the whole first season of the Golden Globe Winning TV series Drama, “Homeland” and was both impressed and also disappointed. The cable series which originally premiered in October 2011 on the Showtime channel is based on an Israeli TV series called “Prisoners of War,” But “Homeland” is about an American Marine Nicholas Brody (played by British Actor Damian Lewis from “Band of Brothers”) who is captured in Iraq and his held captive for 8 years, only to be found by a Delta Force raid on a compound belonging to an Al Qaida terrorist (a character named “Abu Nazir” – played by Iranian-American Actor Navid Neghaban). The main protagonist of the show is CIA agent, Carrie Matheson (played by Claire Danes), who is the only person who thinks Brody is a turned sleeper agent for Al Qaida.

“Homeland” is a lot like “24”, with its moments of intense drama dealing with terrorism, politics and relationships between people.  The show also has excellent writing and great acting.  Because it’s on Showtime, it does contain profanity and adult language as well as some brief nudity – which makes the show much more realistic than “24”.

I was really impressed with the acting of Claire Danes (who won for best actress in a Drama at this year’s Golden Globe awards) and Damian Lewis (Nominated for Best Actor at the Golden Globes). Claire is very convincing as a paranoid CIA operations officer, who although suffers from Bi-polar disorder (unknown to her supervisors), is the only person who is capable of figuring out what Brody is actually up to.  She tries very hard to convince her mentor and boss at the CIA, Saul Berenson (played by Actor Mandy Patinkin) that Sgt. Brody is a sleeper agent who is about to carry out an attack on the U.S.  Damian Lewis is excellent as his role as an American Hero turned Potential Terrorist who struggles coming to terms with his wife sleeping with his best friend (who both thought he was dead in Iraq), his two young children who barely know him, and the media and government officials who put him on a pedestal as a “War Hero.”

Damian also did a great job at learning Arabic – specifically Sura Fatiha, for when he recites his prayers early in the morning and late at night (He converted to Islam while held captive for 8 years – and “there were no Bibles around” like he explained to Claire’s character when she questioned him about his conversion).

What I liked about the series is that they try their best to show that Terrorism is not as Black and White as most politicians and leaders (on both sides of the world) try to make it out to be.  It’s complicated and involves all kinds of people – from religious, to secular, to family people, to lovers, to government officials, to normal and sane people, who may have been pushed over the edge and sometimes the motive is not politics, but just simple revenge.

In this case, Damian’s character of Sgt. Brody is forced to teach English to Terrorist leader Abu Nazir’s youngest son, while he is held in captivity.  Brody has a young son who was only a few months old, when he went off to Iraq for the War, so naturally a bond develops between Brody and Abu Nazir’s son, as they spend a lot of time together.  Then, like what has happened in real life many times, a US drone attack, which attempts to take out Abu Nazir’s hideout, misses and destroys a madrassa, and kills all 83 children, including Abu Nazir’s son. Sgt Brody is hurt emotionally by the death of an innocent child he has grown to love as his own, and becomes consumed with anger when the Vice-President of the United States is shown on international TV denying that the drone attack even happened. This is when Brody decides that he wants to help Abu Nazir mete out justice to the United States government for killing innocent children.

What I don’t like about the show, and was disappointed in seeing, was that whenever Sgt. Brody makes wudu (cleaning himself with water before doing prayers), pulls out his prayer rug, or reads Tasbeeh (rosary) on his hands – they play dramatic music in the background and imply that he is doing something sinister and about to kill someone (when in reality he is just praying or getting ready to pray to God).  It seems like the writers and producers of “Homeland” are implying that a Muslim who prays is a potential terrorist!

I also found it interesting that the character of Saul Berenson (Carrie’s boss at the CIA) is Jewish (who even talks about growing up as a religious minority in a Christian majority town in the storyline), who is shown to be the most fair-minded, intelligent and respectable person in the CIA. This is not that surprising, because it seems that most of the writers and producers of the show are Jewish, but one would think that they should know better than to scapegoat a whole group of people (Muslims) because of the actions of a few.

I look forward to watching season 2 of “Homeland” (currently being produced), because I enjoy it’s suspense, action and acting, but I hope the writers and producers start to focus less on the “exotic” religious rituals of Muslims, and instead continue to develop the storyline in exposing why people become terrorists and how it can be better understood and in turn better combated.

March 22, 2012 Foodistan (Lahore, Pakistan)
Recent Comments
0 | Leave a Comment
Browse Our Archives
get the latest from
Al Mihrab
Sign up for our newsletter
POPULAR AT PATHEOS Muslim
1

Muslim
Light It Up: How Do Religions Around the...
Al Mihrab

Muslim
How to Practice the Teachings of Islam in...
Al Mihrab
TRENDING AT PATHEOS Muslim