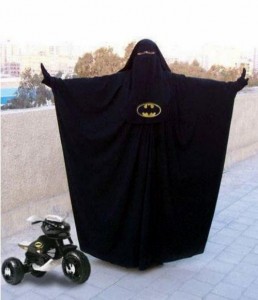 “Is that the new moon for Ramadan?…no wait…it’s the Bat Signal!”

For movie geeks, the third and final film in director Christopher Nolan’s acclaimed Batman trilogy, “The Dark Knight Rises,” is opening up in theaters on July 20th, 2012 – which  coincidentally is the 1st day or night of Ramadan (depending on if you follow local moon sighting or not)!

There has been much discussion online on whether or not young Muslims should go and watch the movie because of its unfortunate release during  Ramadan  – the holiest month for Muslims where we fast from dawn till sunset everyday for a month.  To see The Dark Knight or not to see it until the end of Ramadan (around Aug 19th)?  There is even a facebook group called: “Dark Knight Rises should be either released before or after Ramadan!!!

For most Muslims, this is not a pressing issue due to the following reasons:

But for the rest of us geek/nerd/freak/dweeb American Muslims, the cursed timing of the movie’s release presents a massive dilemma.  Although  I try my  best to pray 5 times a day and eat only zabihah halal meat, I still watch “un-islamic” shows about Vampires and Werewolves such as “TrueBlood” and “TeenWolf”. I also am a movie addict and have seen all the Batman movies. My favorite was “The Dark Knight” (2008), but I also enjoyed the 1989 original “Batman” with Michael Keaton.  I even had a poster of him in my bedroom when I was in high school.  So, like many practicing, American Muslim geeks, I empathize with their predicament.. Of course, we know the importance of Ramadan. We will be fasting and most likely be going to Taraweeh prayers (late night prayers which are held at the mosque – specifically during the month of Ramadan). But, we cannot afford to wait an entire month before seeing the final Batman movie due to the dreaded shaitaan known as spoilers! There are rumors that Batman will be “killed” and the whole world will inevitably be posting on facebook, blogging, and tweeting the entire plot online! Here are my options:

Option A:             If Ramadan does in fact start on Friday July 20th per scientific calculations, then I will probably go watch the movie during the day time (while fasting) on Saturday or Sunday of opening weekend.  This is not my preferred choice, because I always like to have a small bag of popcorn and a Cherry Icee (frozen slush drink which is made of pretty much just pure sugary syrup and ice)!  My movie watching experience will not be very nice, especially since it will probably be a hot day (we are talking about July in California here)!

Option B:             If Ramadan starts on Saturday July 21st per local moon sighting (the new moon although born on July 19th, will not be visible in North America until the evening of Friday July 20th, thus making the first day of Fasting on Saturday July 21st), then on the evening of Friday July 20th, after the first Taraweeh prayers (which will probably end around 11:30pm), I will try to go see the movie at the midnight showing on opening day (Friday July 20th).  This way, I will be able to eat some tasty, yet very unhealthy, movie watching snacks and also fully enjoy the movie.

As a last resort, I can pray to Allah (God) that a miracle happens and the release of “The Dark Knight Rises”  gets delayed by a month. Then,  I can watch it on Eid (the celebratory “feast” after the month of Ramadan is over) so I don’t have to worry about any of this and can enjoy the movie without any feelings of guilt or receiving fatwas for watching a movie during the month of Ramadan.

Ramadan is a time of worship, prayers, fasting and spending time with family and friends over a good evening meal (iftaar – the breaking of the day long fast) everyday. I still have not yet decided on what I will do about the “Bat-Ramadan” situation, but I don’t think God would mind, if I spent 2.5 hours of one of those Holy days and nights of Ramadan watching a movie.  But just in case I will make Dhikhr (remembrance of God) while I’m in line waiting to get into the theater!:)

July 6, 2012 Top 10 Ways on How NOT to Build a Mosque in America
Recent Comments
0 | Leave a Comment
Browse Our Archives
get the latest from
Al Mihrab
Sign up for our newsletter
POPULAR AT PATHEOS Muslim
1