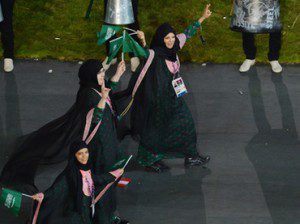 Though it has just begun, the London Olympics already holds a series of historic firsts, especially for Muslims and women around the world. To begin with, the organizers aim to make the London Olympics the first “green games,” developed with the goal of   environmentally friendly and sustainable construction. Muslim women have held pivotal roles in bringing this goal to fruition. Of note are Zaha Hadid and Saphina Sharif.

Sharif, a civil engineer, was an on-site director ensuring that the clearance of the Park site pre-construction met the ‘zero-waste games’ goal.

Hadid, the first British Muslim and woman architect to win the prestigious Pritzer—the equivalent of the Nobel Prize in architecture—is the designer of the acclaimed London Aquatics Center for the games—a ‘Pringles chip’ looking building, by far the most beautiful building in the Park.

The London games are also the first, since the Moscow games in 1980, to coincide with Ramadan, the Muslim holy month where the faithful abstain from food and drink daily from dawn until dusk, which in London’s humid summer this year means a fast of approximately seventeen hours a day for each of the games seventeen days.

Despite the spiritual and physical challenges presented with the timing, this year marks the highest participation of Muslims athletes. With the more than 3,000 Muslim athletes, a third of all participating Olympians are of the Islamic faith. And Muslim representation at the Olympics will not be limited to Muslim nations; for example, at least two Muslim athletes will be representing the United Kingdom as firsts in their respective sports.

And the news that has media abuzz is that this will be the first time Saudi Arabia has permitted female athletes to participate and will thus, include two women on their team. Perhaps lesser known is that Brunei and Qatar will also send a combined five female athletes for the first time. Thus, making the London games the first time women are included on the teams of all the countries participating.
Amongst other Muslim nations, the UAE and Iran will also send women athletes to participate in weight-lifting and table tennis, respectively. Pakistan will send a female swimmer and a runner.

With women’s boxing being held for the first time the Olympics, Afghanistan will send its first female boxer, Sadaf Rahimi. Algeria and Turkey will both send women’s indoor volleyball teams, making two out of the twelve national indoor volleyball teams qualify from Muslim majority nations. Egypt, despite its political instability, will send thirty-four female athletes, the largest delegation it has ever sent, and it seems, the largest any Muslim nation has sent, yet. Even Palestine, with its five-member team, boasts two women athletes.

In all likeliness Malaysia’s shooter, Nur Suryani Mohamed Taibi, will stand out not just as a woman from a Muslim nation, but as possibly the most pregnant athlete to compete, as she is expected to give birth any day now.

Some are dubbing these developments as ‘the rise of the Arab female athlete,’ or even, ‘the rise of the Muslim female athlete.’ Earlier this month Vanity Fair featured stunning highlights from “Hey’Ya: Arab Women in Sport,” an exhibit by the magazine’s photographer Brigette Lacmobe and her sister, Marian, a documentary filmmaker. The breathtaking photographs offer a glimpse at women in the Middle East in stark contrast to how we usually see them depicted in the media—active, athletic and glamorous, with no signs of the ominous burqa.

In recent years we have seen gradual recognition not only by governments succumbing to political pressure and pop culture expanding its collective imagination but also officially, by athletic organizations such as IOC and FIFA, both of which started to accept athletic hijabs. Though there are specific Olympic competition chairs who still claim the hijab is a hindrance to athletes. Currently, one of Saudi’s two female athletes, Judo competitor Wojdan Ali Seraj Abdulrahim Shahkhani, is being told she cannot fight while wearing a headscarf.

The challenge remains for women to go from token recognition in their fields to bona fide acceptance.
Many of the Muslim female athletes who made it this year, did so without official sponsorship and trained in subpar facilities. Some are not considered valuable to their country’s athletic programs or are not allowed to compete within their home nation’s borders because of restrictions on gender mixing and the politicization of the concept of modest attire. Both women representing Saudi Arabia, for example, train outside of the Kingdom’s borders – Sarah Attar, who will compete in the 800-meters is actually an American who holds dual citizenship because her father is Saudi Arabian. Some, like Rahimi, represent defiance to decades of strictly interpreted religious tradition and gender stereotypes.

Beyond athletes in conservative Muslim nations, even 62-year-old Iraqi born Hadid is still viewed as an outsider in the British architect community. Despite her groundbreaking designs and worldwide recognition, she says neither she nor her members of team received an invite to any of the events at the London Aquatic Center.

One can only wonder, though, despite the ongoing challenges, what all these firsts will mean for the generations of young Muslim girls watching the games—the ones who will, for the first time, hear music and see dance previously reserved only for family occasions; see women athletes with names and faces like theirs, some in hijab, some without; and hear the names of the Park’s prominent designers—and will be inspired to achieve even more.

Nadia Mohammad is an Assistant Editor for AltMuslimah, where a version of this article originally appeared. Photo courtesy of Associated Press. 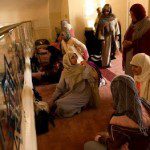 August 1, 2012 Ramadan Reflection - God is Beautiful, and He Loves Beauty
Recent Comments
0 | Leave a Comment
"FsyYOU are hate. Period."
Soren A Ramadan Testimonial of Repentance and ..."
"Thank you for sharing this article along with detail information, and you have mention the ..."
wazeer shaik The Path Through Hajj – One ..."
"Tamerlane is considered an oppressor amongst Islamic scholars and an anti-hero in Islamic culture. It's ..."
Ali Inspiration: Star Wars: An Islamic perspective
"did you head to syria? did you take ilisha?"
mike malzahn Quran, Hadiths or Both? Where Quranists ..."
Browse Our Archives
get the latest from
Muslim
Sign up for our newsletter
POPULAR AT PATHEOS Muslim
1

"Is Allah Punishing Me?"
Mostly Muslim
Related posts from altmuslim