Where’s My Space to Pray in This Mosque? 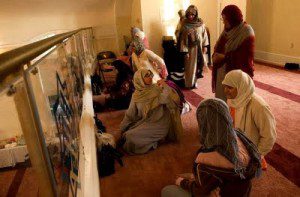 I’d like to share with you a story from the reign of Umar, the second Caliph of Islam (may God be pleased with him) which carries powerful lessons today.

One of the wives of Umar bin Al-Khattab used to offer the Fajr and the Isha prayers in congregation in the Mosque. She was asked why she had come out for the prayer as she knew that Umar disliked it, and he has great ghaira (self-respect). She replied, “What prevents him from stopping me from this act?” The other replied, “The statement of Allah’s Messenger (peace and blessings be upon him) : ‘Do not stop Allah’s women-slave from going to Allah’s Mosques’ prevents him.” Sahih Bukhari

It appears that the only reason the Caliph Umar allowed his wife to offer her prayers at a mosque is because he did not want to go against the plainly expressed wishes of our beloved Prophet (PBUH).

In most Western Muslim communities today, women are not prevented from offering their prayers in mosques. Sometimes, they are even encouraged to attend, especially during Friday prayers and the nightly Taraweeh prayers that Sunni Muslims offer during the holy month of Ramadan. But it often seems to me that the Prophetic tradition invoked in the story above is the only safety net women have. Too many mosques have inadequate spaces for female congregants; others have the space, but keep the doors locked. Still others have adequate spaces for women to pray, but think of the women’s areas as the space to be kept aside for late-arriving men to use, because God forbid the men be sent down to a basement along with the women and children.

Some prominent organizations and religious leaders have begun to address this issue; the Islamic Society of North America (ISNA; Sunni Islam’s largest umbrella organization in North America) published a booklet identifying the problems women face in North American mosques and offering workable solutions for largely middle and upper-middle class national Muslim communities. The problem for most American Muslim communities isn’t a lack of funds; it’s a lack of awareness on the part of male decision-makers about the experiences of women in mosques. 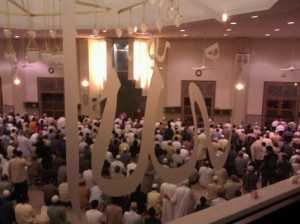 Which is how you get the five million dollar mosque near my home, with marble flooring, fancy technology, gorgeous landscaping with a fountain around it – and even a mezzanine for women (though we pray in the multipurpose basement for Fridays and Taraweeh), but no rooms built for babysitting or for women who come with small children. Or, you get the awesomely hilarious glass panels at another multi-million dollar mosque. This mosque has one of the best prayer spaces for women in the Chicago area, but the interior design caters to the male experience, right down to the glass panels on the ladies mezzanine floor engraved with “Allah” and “Muhammad” that face outward. As I joked to my friend, the only people who can read the panels are the men downstairs who look upward trying to get a glimpse of the ladies.

The actions of conscientious Muslim leaders haven’t stopped more radical acts happening, including movements for female-led mixed gender prayers and the perhaps less radical, but no less controversial, forced desegregation of men’s prayer spaces by women activists. Women activists who are upset at their inadequate prayer spaces span a wide ideological spectrum: some are extremely liberal/progressive, while others are conservative. Still, others would self-describe as “moderate,” hoping to embody the “middle way” of Islam. While I understand and sympathize with the frustrations of those who advocate for a female imamate, I believe that a more pressing problem that most American Muslim women face is simply access to equal and comfortable prayer space in our mosques.

Last night I heard a disturbing story from a dear friend of mine, who is studying to be a Muslim chaplain. After a week of praying Taraweeh in a cramped and over heated basement, with some bug-infested areas smelling like mildew, she asked her male relatives what their praying experience was like. Upon hearing that they had air conditioning and extra space in one of the 3 levels of the mosque, my friend and a few other young women decided to pray behind the men on the 2nd floor. For their trouble, they were yelled at and were threatened that the mosque would call the police if they didn’t leave the men’s area. In the end, these brave women prayed outside on the grass (where they could see that the all-male first and second floors were not full).

There are two routes that American Muslim women could take in order to address the problem of inadequate space in mosques. We could take the Chinese route and develop their own all-female mosques, with female imams and the feelings of empowerment that comes with being completely free to be who you are as a woman in your own place of worship, where female leadership is encouraged and nurtured. It’s an intoxicating idea, but a more appropriate choice might be to take the Turkish route and work with male community leaders to ensure that our houses of worship are equally welcoming to men, women and children. That women’s spaces are designed with the same care and attention to comfort and beauty as men’s spaces.

This route will only work if women activists have male allies within the Muslim community. I believe that when more men of conscience, such as ISNA president Imam Mohamed Magid – a strong supporter of women’s rights in American Muslim insitutions – hear and see our stories, they will understand our plight and add their voices to ours. Last year, the men behind the cutting edge, Ramadan-based 30 Mosques project began to amplify the experiences of their sisters in faith, catalyzing a controversial, yet robust and much-needed debate. To that end, I’m currently collecting photos of women’s and men’s Muslim prayer spaces to publish in my Tumblr Side Entrance. If you would like to contribute, please submit your photos to hijabulousinthecity@gmail.com.

Hind Makki is an American Muslim interfaith activist based in Chicago. She believes in bridging cultural gaps through community service and sharing narratives. She blogs at Hindtrospectives, where this post was originally published. 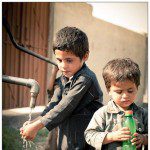 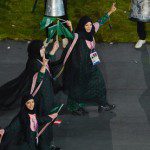 July 30, 2012 Muslim Women Make History at London Olympics
Recent Comments
0 | Leave a Comment
"Yow its so sad my eyes are sweaty😭BN.BELIEVE.ASIA/VZ7527IE"
Batelthda Gaslighting, Anti-Jewish and Anti-Muslim Rhetoric: What ..."
"Everyone's pervy minds will b opn ryt nw dmn!m.XIAOWANZI.INK\C7527Wg"
ThePumpkinQueen It’s Time to Boycott Saudi Arabia
"Thanks for sharing informative blog with us regarding the halal meat revolution."
Boxed Halal Sustainability: The eco-halal revolution
"Salam. I am going to be blunt and honest with you. Girls who are doctors, ..."
Rubina Ahmed Looking for Love and Finding Awkwardness ..."
Browse Our Archives
Related posts from altmuslim