You Can’t Complain if You Don’t Vote – Get Out and Vote September 27, 2012 Guest Contributor 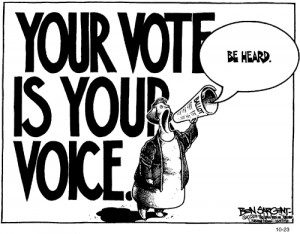 The first time I was eligible to vote was when Bill Clinton was running for president for the first time in 1992. I was so excited. In high school, I had great social studies teachers who really instilled the power of civic participation in me. I was on my own at college, and there was a charismatic guy running on America’s liberal party. I voted. My man won. That was a high. This man owed me because I voted for him.

But, after about a 100 days into his presidency, I got sick of it.

What I voted for wasn’t happening. Liberalism in America was conservatism everywhere else in the world. In discovering my own political leanings, I was becoming more and more progressive, so the Democrats were becoming more and more conservative in my worldview. I was sick of the system. By 1996, I wasn’t voting. There was no universal healthcare, higher education was becoming more difficult for people to attain financially and race was still a dominant issue in America.

By 2000, my opinion of the futility of voting was vindicated. Even with America’s liberals in power, there was no escaping the attitude that the only good colored man was an imprisoned colored man. Further draconian laws that disproportionately impacted communities of color were passed, and terrorism legislation emerged that made our basic rights look like something optional in our citizenship.

When George W. Bush came to power in 2000, everyone’s rights got thrown under the bus, unless you were wealthy. Then, I thought maybe I should have voted. And, I realized that it wouldn’t have mattered. Bush won. My vote meant squat. Unless I was living in Florida, in which case, as a brown man, my vote would have meant even less. It wasn’t about what the parties could do for the people who voted for them, but who people thought was nicest to them while they were abused by the system.

What the Republicans did was so obviously wrong, but still supported by the Democrats and public opinion, that it was demoralizing. But that didn’t mean I could let people continue to become victimized by the system. As I started to get involved with community groups, I realized something profound about my civics education. I didn’t get it. Voting wasn’t the entirety of being civically engaged, it was the capstone.

I didn’t need to think about the big issues until I had an understanding of the daily issues — the important issues. I realized that I voted for the President like I was voting for a god — wanting a leader who was politically omniscient and omnipotent. But I realized that the President really can’t solve all problems, especially not the ones I wanted fixed. I had disenfranchised myself from the process, but at least I had a choice.

I knew there were so many others who did not.

Change happens at the local level, and works its way up. I learned why no politicians spoke for me or mine: Because I didn’t speak to them. I know why my changes didn’t happen: I could speak to structural issues, but didn’t translate it into reality. The system is fundamentally broken, and I contributed to breaking it.

If there is no one who speaks with us, then who speaks for us? Now I am voting again. I’m not voting for a god. I’m voting a person to represent me. So now, I don’t vote every four years; it’s every year. I don’t want people who agree with me on everything, because that’s not going to happen unless I run myself. I want people who see something that is failing and want to empower those who can address the problems. I want someone to catalyze solutions, not create roadblocks.

In other words, the civics lesson I learned was that you can’t complain about the game if you don’t play. Go out and vote. Every election — vote. Speak to your representatives. Be a part of your community. A change is going to come.

Tweet your thoughts on this article and the election series at #MuslimVOTE.

Hussein Rashid is an academic, activist, and lecturer. He is deeply committed to community engagement and community building. A native New Yorker and proud Muslim, he believes his faith demands that he leave the world a better place for the next generation. Photo courtesy of Ben Sargent.

This article is part of the “Election 2012 – American  Muslims VOTE!” series, which is running on Altmuslim at Patheos, Altmuslimah, Illume, and Aziz Poonawalla’s news and politics blog on Patheos. Click on this special topics page to view all articles in this series and add your comments. Tweet your thoughts on this article, on the series, and on the 2012 elections at #MuslimVOTE. 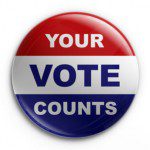 October 2, 2012 The Battle Between the Sacred and the Profane
Recent Comments
0 | Leave a Comment
Browse Our Archives
get the latest from
Muslim
Sign up for our newsletter
POPULAR AT PATHEOS Muslim
1