My Hajj Reflections – The Greatest Jihad 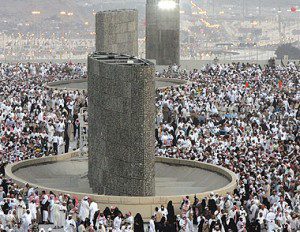 Davi Barker, who writes at The Muslim Agorist and for other publications, recently returned from his Hajj pilgrimage. Altmuslim is featuring a few of his reflections this week, as Barker settles back into his post-Hajj life.

Earlier this month I returned home from Hajj, the Islamic pilgrimage to Mecca. They say the sign of a successful pilgrimage is that your life changes. Well, I got that in spades, as I’ll explain. But the strangest thing about being back is when people ask me, “How was it?” — like I was returning from a Sunday matinee or a dentist appointment. I don’t think it’s possible to summarize in words pithy enough for casual conversation. The closest I’ve come is “It was not what I hoped, but everything I needed.”

It reminded me of the Spiral Dance, a name popularized by the author Starhawk, for a motif that is ubiquitous across spiritual traditions. The May Pole. Yggdrasil. It is the concept of traveling to and circulating the axis mundi only to discover that the journey had a beginning but has no ending, because the boundaries of the circle were always ephemeral.

Before I left, my consciousness was centered around maintaining my own integrity along the journey. Integrity is all too cheap in this world, so cheap in fact that the public order has left almost no accommodation for it whatsoever. A person of integrity is by necessity a rebel, because one can no longer do anything, no longer travel, no longer buy or sell, no longer milk cows and drink children’s lemonade without the public order demanding that we compromise our integrity. On this journey I would contend with two bureaucracies before I would reach my destination, the TSA and the Saudi Regime.

On the application for a Hajj visa, one is asked to sign a document to the effect that they accept all the laws of the Kingdom of Saudi Arabia. In the document published by the Saudi Embassy describing their basic laws, Article 1 defines them as a “sovereign Arab Islamic state.” I don’t see how I could possibly sign such trash with my integrity intact. So, I didn’t. I wrote “under duress,” and thankfully bureaucracies are too bloated and inefficient to catch small details most of the time.

To explain why I cannot agree to define Saudi Arabia as an “Islamic state” (to whatever extent such a thing can exist, or should), here’s a little background. The Saudi Regime is hardly even a government. It is a British-created, America-backed oil cartel, and little else. Armed and funded by the British in exchange for oil rights, the Saud family slaughtered the Muslims of Arabia who wouldn’t accept their doctrine, pushing adherents of traditional Islam into North Africa and surrounding Arab nations. They modeled their state on a British principality, not anything indigenous to Islamic culture, and became honorary “Knights of the Bath,” a British military order of chivalry.

Since then, they have bulldozed dozens, maybe hundreds of historical sites and monuments that had been part of Islamic heritage for over a thousand years. They desecrated the graves of many prominent historical figures, including members of the Prophet Muhammad’s family. And, they destroyed the history of their own rise to power by banning books which criticized their doctrine. So, forgive me if I see their Islamic paraphernalia as pure propaganda, and them as satanic usurpers of Islam’s holiest sites.

There is a saying of the Prophet Muhammad’s that has long been my favorite, which is, “The greatest jihad is proclaiming the truth in the face of a tyrant (Tirmidhi 2174).” But, it has always seemed like an apparent contradiction to another of his more popular sayings that the greatest jihad is the inner struggle against the false self. During my trip, it occurred to me that there is no contradiction here at all. One describes the macrocosm and the other the microcosm of the same basic struggle between truth and falsehood.

The tyrant is a false self at large, dispelled by truth, not by force. And the false self is itself a tyrant, enslaving the true self by illusion. It forbids you from taking action, censors you from speaking out and rules you by fear. So, the inner struggle is in reality to proclaim the truth in your own face … because your worst tyrant is you.

This has been a major change for me, acknowledging that there is no political solution to the problem of illegitimate public order. If there is a solution to the problem of liberty and tyranny in our lives, it is a personal one. It is to act, to speak and to think with integrity. No political solution is viable. Electing a duopoly candidate is no solution. And electing a third party or independent candidate is nonviable.

Democracy, and politics more generally always produces a tensegrity that must eventually collapse. Historically, tyrannical powers collapse either by over extending their military, or over printing their currency. The United States is poised for both, and any potential solution to this crash will be resisted by the powers that benefit from these policies. Candidates who propose these solutions will be marginalized. Civilians who demand these solutions with any effectiveness with be targeted. The ship is sinking. The only viable solutions are to look for a life raft, or learn to swim.

So, how does one act, speak and think with integrity? That became the center of my thinking over the course of the trip, and will become the question driving my advocacy moving forward.

A version of this article was originally published in The Examiner. Davi Barker writes at The Muslim Agorist and for other publications. He was born in California and during childhood travels, he was struck by the wonders of nature — a lightning storm over a primordial desert in Arabia, or the cherry blossom petals sprinkling down on the floating markets in Thailand. He spent his adolescence as an outsider, but recently is realizing alienation is not uniqueness, but a universal similarity that crosses all cultures and religions, caused by our separation from our true self and our separation from nature.

December 6, 2012
Reflections from My Hajj - The Ka'ba Versus the Saudi Regime
Next Post

December 13, 2012 Lesley Hazleton's TEDx Talk on Stereotyping Islam
Recent Comments
0 | Leave a Comment
"FsyYOU are hate. Period."
Soren A Ramadan Testimonial of Repentance and ..."
"Thank you for sharing this article along with detail information, and you have mention the ..."
wazeer shaik The Path Through Hajj – One ..."
"Tamerlane is considered an oppressor amongst Islamic scholars and an anti-hero in Islamic culture. It's ..."
Ali Inspiration: Star Wars: An Islamic perspective
"did you head to syria? did you take ilisha?"
mike malzahn Quran, Hadiths or Both? Where Quranists ..."
Browse Our Archives
Related posts from altmuslim