Rediscovering Islam in a Post-Divorce Landscape 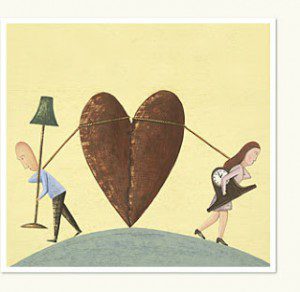 My marriage had taken me all over the Muslim world — to Mecca, Cairo, Kabul and countless countries in between. I would even venture to say that over the course of my 12 year union, I experienced more Islam than many Muslims will know in their lifetimes. Yet, I left the relationship to dive deeper into my faith in a manner that felt more organic and honest. To some, this admission makes me selfish. To others, it paints me brave.

For many Muslims, the decision to leave a decent husband, but an empty marriage, implies I am the typical, flippant and capricious white American woman who many Muslim mothers fear will snatch their sons away.

Marriage is half of your faith, according to the Qu’ran. Some will spout that it is forbidden to saw off your spiritual half in order to upgrade. Others will suggest that there is only one Islam anyway, and if you can’t find it within your marriage, then you are the problem. Then, there is a saying by Prophet Muhammad (peace be upon him) that of all things made permissible by Allah, divorce is the one most hated by our Creator.

Knowing full well the reactions I would receive upon deciding to leave my husband, I still felt that we had grown apart and that I had to leave a marriage that left me spiritually depleted. Although I took this bold step to draw close to Allah, I, ironically, spent the first year as a single woman in punch-drunk rebellion — I aggressively avoided the faith. I stopped greeting fellow Muslims. I did not care to explain why I knew bits of Arabic and even more Farsi. “I have been to your country, and yours,” I would say, rather than identify myself as a Muslim. I did not know what to do with the vacant spiritual space that had appeared within me except acknowledge that I was no longer a “good Muslim sister” poster child. A small amount of guilt and shame accompanied this admission, but I also recognized that I was not the first Muslim woman to feel fragmented and lost.

During this year of spiritual drought, I tried to remain mindful of Allah, but it felt forced and inauthentic. My Islam — I always call it “my Islam” — had become the quirky thing I brought to parties because it made me cool and unique. I continued to appear on radio shows, sometimes with thousands, even a million listeners, addressing my Islamic identity in some capacity. But I now found myself speaking of wanting to shed labels. I would point out how I had stopped wearing Islamic dress because it kept me chained to a corpulent body I detested. I would explain, with a confidence I did not feel, that I had left my marriage to become a better Muslim, to find my true self.

In my 18 years as a Muslim, I had worked for an Islamic think tank, married and raised five step-kids in a cross-cultural family. It would not have been an exaggeration to note that I had graduated from an ordinary Muslim American to an Ummah Wonder Girl or sorts. I had come to represent an Islam of global proportions. Yet of all the things I had been in my life, I had never been a vivacious, single, white American woman — until now.

I dove into my new life with an eagerness born of impatience. I knew I had lapsed in the practice of Islam, although I never wavered in my faith — I continued to believe in Allah as strongly as I ever had — so I prayed to God for guidance. Instead, non-Muslim white men showed up — what strange creatures to me now! — and I unfolded effortlessly into this new, odd existence.

This past year yielded a man I grew to love. I called him the Prof. because he was on tenure track. He was not a not a Muslim, and it is fair to say he did not love me back.

I had constricted myself within the tight, confining lines set by the cultural expectations of my marriage. It was with the Prof. that I finally intellectually unfurled. No man had ever challenged me like this one. He functioned as an unofficial witness to my life jump. The Prof. listened to my radio appearances and applauded my public writing. I sensed he was proud to know me. His platonic presence confirmed that, like many divorced Muslim women, there is a strong likelihood I will develop significant relationships with men outside of the faith.

We often spoke about large issues of a philosophical nature but never touched Islam. One day, I asked him about my “Muslim-ness.” It was not something he found exotic, weird, or problematic, he replied. In fact, he didn’t think of it all. For him, it was one external way I marked the “what” of my existence, but not the inner “who” of it. This threw me into a profound existential crisis. I had been a Muslim for almost half of my life. How could someone read me without it? The Prof.’s statement left me wondering if Islam was now merely an expendable accessory.

This discussion had unintended positive consequences regarding my religious identity. I accepted that I was a messy, incomplete human being, yet I could also remain completely Muslim. Even Muhammad (pbuh) questioned his sacred call in the early years of prophet hood while experiencing a lull between revelations. I found humanity and peace in the fact that while he never doubted his belief, he did at times struggle with how to believe. Muslims often hesitate to share these very real catastrophes of consciousness. Too many are afraid to publicly reveal that how we are told to feel about faith can alienate our spiritual journey. We are encouraged to hide or to dishonor the experiential, untidy parts of our lives, yet they are precisely what force the flesh to grow on personal faith.

During my self-imposed exile, I never thought of “leaving” Islam. I had not converted or reverted into this spiritual frontier. I had not twisted myself sideways or backwards to fit into this faith. I am still evolving into my own Muslim moment where I am perfectly, gloriously flawed, but still worthy of the Divine. I have started greeting fellow Muslims again. This time, there are no self-conscious apologies for this emerging authentic self. I decide that I will now claim my own little inch on Islam’s Straight Path. I won’t even ask other believers to move out of the way for me. My salaams come with all with all my complicated, messy parts. These contradictions feel like home.

Deonna Kelli Sayed is an American-Muslim writer. She is the author of “Paranormal Obsession: America’s Fascination with Ghosts & Hauntings, Spooks & Spirits.” She also has an essay featured in “Love, Insh’Allah: The Secret Love Lives of American Muslim Women.” Visit www.deonnakellisayed.com to learn more. This essay originally appreared on Altmuslimah. 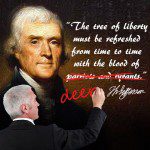 February 13, 2013
Why is ISNA Involved in Advocating for Gun Control?
Next Post 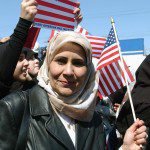 February 21, 2013 Islamophobia is Only One Chapter in the Muslim-Western Story
Recent Comments
0 | Leave a Comment
"FsyYOU are hate. Period."
Soren A Ramadan Testimonial of Repentance and ..."
"Thank you for sharing this article along with detail information, and you have mention the ..."
wazeer shaik The Path Through Hajj – One ..."
"Tamerlane is considered an oppressor amongst Islamic scholars and an anti-hero in Islamic culture. It's ..."
Ali Inspiration: Star Wars: An Islamic perspective
"did you head to syria? did you take ilisha?"
mike malzahn Quran, Hadiths or Both? Where Quranists ..."
Browse Our Archives
get the latest from
Muslim
Sign up for our newsletter
POPULAR AT PATHEOS Muslim
1