Why #MyJihad Doesn’t Engage with Islamophobes Like Pamela Geller 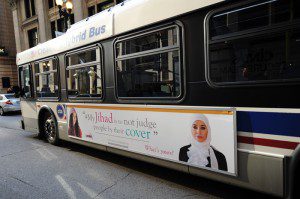 I am writing this as an opportunity to clarify the misconceptions, misreporting and misunderstanding surrounding the #MyJihad campaign, of which, I am the project coordinator and essentially lead day-in and da- out. And night. And in my dreams. So really, not many others can give you the straight deal on this campaign like I can, save a few others who work tirelessly on this brilliant, groundbreaking movement.

Davi Barker, who blogs at The Muslim Agorist and writes for The Examiner and Altmuslim, wrote a piece in which he analyzed a debate noted Islamophobe Pamela Geller had with Michael Krasney opposite David Chiu, president of the San Francisco Board of Supervisors and Jess Ghannam, a professor from UCSF and director of the Arab Anti-Discrimination Committee of San Francisco.

In the article, Barker stated that Gellar won the debate and that #MyJihad should’ve engaged her. I have several problems with his article.

First, there are several incorrect statements Barker makes regarding our campaign. Each of our official ads was carefully selected and feature real, personal jihads. My ad highlights how I lost my son before his fifth birthday. So the nonsense quotes Barker says are examples of our official ads are wrong. While he does make clear that #MyJihad is not a CAIR project, most of all, it is especially not a national CAIR project.

#MyJihad is an entirely grass roots project, conceived by Ahmed Rehab (who is Executive Director of CAIR-Chicago) and carried out by everyday regular citizens like myself. In fact, three of our most active volunteers of the “core team” are mothers.

Let me back up and explain this idea of grass roots even further. My son Amir, who is 11, is growing up in a time where he is asked every so often if he is a terrorist like Osama bin Laden — because he is Muslim. Our children are growing up in a time unlike any of us previously experienced. They are defending themselves and explaining things that have nothing to do with them simply because they are of a particular faith.

Finally we have a platform for the average Muslim that isn’t affiliated with anything political or overtly religious — just a place where we can present ourselves as we are, how we live daily and finally be heard. So that I, my son, Sadaf Syed’s kids, Yasmina Blackburn’s kids (all helping with the campaign) and so on, don’t have to continually repeat ourselves over and over in trying to be heard over the loud sounds and seen over the images plastered on buses and in selective media.

Where Barker Got it Wrong

Mr. Barker thinks we should respond to people who are purposely hijacking and misusing our words and our faith. Well, Mr. Barker, that is precisely what our #MyJihad campaign is doing; however, we owe no one any proof as to who we are and what we believe.  He tries to make the argument that since a radio station offered the platform for a hate group to speak, #MyJihad volunteers must address it.

Let’s be real. Media loves controversy. They love a good fight. Is Barker really insisting that we entertain that? Just because you throw two guys into a ring and tell them to fight, are they obligated to fight? To properly debate a topic, the two sides must be opposing yes, but equal in credibility. They need to both have some kind of valid platform or grounds to stand on.  By these standards, Geller is and never will be qualified to debate us or our campaign.

Geller and her clan are no authority on Islam, Muslims, or even people of faith for that matter.  She pulls quotes out of context, uses extremists for her examples and flat out lies in many cases (which we have investigated and proven, by the way.) Her motives are completely political. #MyJihad is a social platform. You can’t equate the two. So, of all people, we certainly owe people like Geller no explanations.

Wrote Barker: “The fact is CAIR was the right opponent for this debate, if for no other reason than because it’s being misreported that #MyJihad was CAIR’s campaign.”

Wrong. CAIR and even CAIR-Chicago, have no ownership over #MyJihad. Just because some media and people like Geller purposely misreport that it’s a CAIR campaign, we need to perpetuate this false idea by having them play the role? I’m sorry, but there is no logic in such a statement. Additionally, #MyJihad is a global, grassroots campaign, meaning anyone, anywhere can take part in their own way. That CAIR-SF chose to refuse the radio show with Geller was their own choice and independent of the #MyJihad campaign.

Wrote Barker: “The role of someone debating Geller is to get her to expose her true intentions in her own words, because she will never answer that question outright.”

Bingo. So why on Earth, Mr. Barker, would we ever entertain the idea of debating such a person one-on-one if she will never answer outright? Clearly, addressing Geller or any of the Islamophobes, will be fruitless. They aren’t out to debate. They aren’t out to understand, nor are they even open to the possibility of hearing reality or facts. Such people are hate mongers with a narrow agenda, part of which is to be heard and paid for it. #MyJihad will never contribute to that.

Dear Mr. Barker, #MyJihad is not (and never will be) out to oppose Geller or the likes of her. #MyJihad is out to reclaim the use and meaning of the term Jihad to its proper form, as practiced by millions of Muslims around the world, from both Muslim and anti-Muslim extremists who have misused it. We aren’t going to do this one-by-one. No. We ARE tackling our goal as a movement. A grassroots movement where we rise above those who attack us and misrepresent us — not battle them head on — much like the meaning of Jihad itself actually. We don’t stoop to these extremists’ levels. We present ourselves proudly and with conviction. And thankfully, we ARE succeeding.

Angie Emara is the project coordinator for MyJihad Inc.

April 10, 2013
In the War of the Billboards, Islamophobe Pamela Gellar is Winning
Next Post 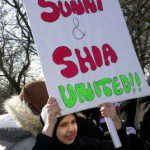 April 18, 2013 Lord, Be My Witness - The Irrationality of Shia-Sunni Violence
Recent Comments
0 | Leave a Comment
"FsyYOU are hate. Period."
Soren A Ramadan Testimonial of Repentance and ..."
"Thank you for sharing this article along with detail information, and you have mention the ..."
wazeer shaik The Path Through Hajj – One ..."
"Tamerlane is considered an oppressor amongst Islamic scholars and an anti-hero in Islamic culture. It's ..."
Ali Inspiration: Star Wars: An Islamic perspective
"did you head to syria? did you take ilisha?"
mike malzahn Quran, Hadiths or Both? Where Quranists ..."
Browse Our Archives
get the latest from
Muslim
Sign up for our newsletter
POPULAR AT PATHEOS Muslim
1