Reflections on the Hajj – Establishing A Muslim’s Center 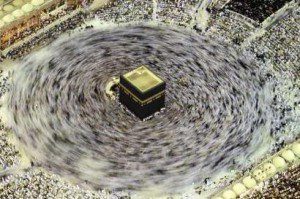 If you want to know what matters most to you, observe what first comes to mind when you wake up. What is that one issue that keeps swirling through your mind day after day – that one matter your thoughts can’t help gravitating around?

As I sat outside with a friend in glorious spring weather, squinting against the sun and the tears gathering in my eyes, I knew how true this was. “You are going to keep having this same issue until you resolve it. You are going to keep circling around it,” she informed me. And she was right. Over the years we had been friends, I had raised variations on this same theme with her many times. I was caught in the gravitational pull of this problem. There were many days when I thought about it as I went to sleep, and it was on my mind when I woke up again.

Many of us have that one issue we can’t stop focussing on. Work, relationships, money, status, past hurts, future fears, real or perceived injustices – we fixate on something and come back to it again and again, like an old cassette stuck on a loop. And it starts to shape who we are. Mentally circling around something repetitively re-forms our inner self the same way a potter’s hands mould a lump of clay on a constantly-spinning wheel. So when I constantly focus on monetary wealth, when my thoughts are always on my bank balance and financial acquisition for personal gain, it is almost impossible not to become a greedy individual.

The light around which the moth of my soul spirals is both telling and formative. What is at our center matters.

One of the most important rituals of Hajj (the once-in-a-lifetime obligatory pilgrimage in Islam) is the rite of establishing what needs to be at a Muslim’s center. During this stage, Muslims must circumambulate a simple black cube called the ka’ba seven times. Muslims do not believe the ka’ba is God, or that God lives in there. Instead, this basic, empty box – perhaps most notable for its simplicity – is believed to be the first house built to monotheistic worship. Muslims believe Adam built it, and it was later re-built after damage, by the prophets Ibrahim and his son, and then lastly Muhammad. Thus, it is a tangible representation of the human need to worship God and God alone.

The centrifugal force of this world pushes us away from true surrender to God with all the intensity of the Gravitron ride at an amusement park. The spinning pressure flings us outward, and we are caught in a dizzy mess of the unhelpful distractions of life that pull us off our real course. This ritual of Hajj, called tawwaf, reminds Muslims that only a life that circles permanently around God makes sense, that the one ethos to which we must return again and again is true love and submission to God.

As is so often the case in Islam, the worship of the body and the soul are closely intertwined. Our body bows down along with our spirit in our prayer (salat), our body taps into our spiritual starvation during our fasting (in Ramadan). And during the tawwaf of Hajj, we reconnect with the central truth that our body, mind and soul needs to circle and re-circle. Our feet wear down coiling paths in the ground around the ka’ba, as Muslims have for hundreds and even thousands of years, reflects the more important track work of our souls being ingrained. Anything else we were previously looping around were just the idols of secondary concern.

The tawwaf is about realigning ourselves with the gravitational pull of what our inner self needs to be orbiting: true presence with Allah, a focussed consciousness that is so often absent in the giddy spin of normal life. And so it is fitting that as Muslims first approach the ka’ba, the words they are to call to God are Labbayk Allahumma labbayk – “Here I am, Oh God. Here I am.”

Susan Carland is completing her PhD at Monash Univeristy in the School of Political and Social Inquiry, where she is researching the ways Muslim women fight sexism. This article was originally published on ABC-AU. 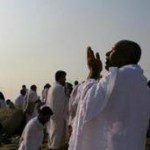 October 8, 2013
Call for Submissions - Send Us Your Reflections on Dhul Hijjah, Hajj and Eid ul Adha
Next Post 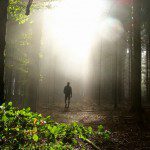 October 24, 2013 Will My Family Go to Heaven?
Recent Comments
0 | Leave a Comment
Browse Our Archives
Related posts from altmuslim