Is There Room for Discourse and Critical Thinking in Islam?

Is There Room for Discourse and Critical Thinking in Islam? October 9, 2014 Guest Contributor 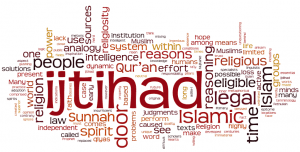 I would like to begin by stating that my sentiments in the following anecdote are my own, personal opinion.I tell it as an attempt to reveal the beauty of discourse.

I walked by the “Dawah Day” booth of the Muslim student group at my university and read something that I found interesting. Representing the five pillars of Islam were literally five walls that posed as actual pillars with the obligations written on each one. As I stood and read each pillar, I came across the second wall that read, “Praying five times a day in Arabic, the language prescribed to us in the Holy Quran.” In Arabic, I thought. Does it have to be in Arabic?

I suddenly remembered attending a spiritual night at my youth group in Los Angeles, and one of our youth mentors led the group in a prayer that he recited in English. As I followed along the translation of the Quran in English for the first time in prayer, I actually understood everything he was saying. For the first time, I was not rushing through Arabic words of which I didn’t know the meanings.

Was that wrong of us to do? I thought, as I stared at the statement. “Arabic, the language prescribed to us in the Holy Qur’an.” I found myself in complete disagreement with the words that my colleagues wrote. I looked over at a friend standing by me and described my sentiments to her. She disagreed with me, and a gentleman overheard our conversation and excitedly joined in, as did a few other Muslim students.

My belief was that God hears and understands all of our languages, and as long as we understand what we are saying, then we are getting the most out of our prayers. My colleagues believed that Arabic cannot be perfectly translated, and anyone who does not know Arabic is obligated to learn it. This should be our lifelong commitment.

The gentleman who joined in early in the conversation decided to make his argument using a different angle: “The Prophet, peace and blessings be upon him (PBUH), prayed in Arabic and he was the perfect human being that we all strive to become like. Wouldn’t you want to emulate the exact actions of the prophet?”

Although I understood his point, I answered back, “My perfect emulation of the prophet would be having the deep connection with God that he had while praying and feeling the utmost spirituality that he felt. I cannot do that when I recite in Arabic because I don’t understand most of what I’m saying. I do understand when I read in English.”

How Much Should We Rely on Scholars?

During our conversation, a point was mentioned that made me think very deeply about the history of scholarly reference to many religious opinions: “The majority of Muslim scholars ruled that prayer should be recited in Arabic and in no other language. Because the majority agreed on this fatwa, or religious ruling, then we should not pull our own opinions out of our own minds just because we feel or think a certain way, and make that our Islam. We must go along with what the majority of our scholars agreed on. Doing otherwise is not logical.”

Although I agreed with him somewhat about that point, I was still very skeptical.

I did a lot of research later that night and found many different scholarly opinions on this topic. One scholar, Ibn Taymiyyah, who shared my opinion, said:

“Supplication is allowed in Arabic or any other language as God knows the intention and meaning of the supplicator. God knows the sounds of His creation crying out regardless of the language.”

An opposing source, the Kuwaiti Encyclopedia of Islamic Jurisprudence said:

This conversation developed in me a desire to learn and understand these differences in opinion. After spending a long time thinking and discussing this topic with many people, both religiously educated and not, I realized that there is so much that we think we actually know, but the reality is: None of us know anything for sure. And, the history of Islamic thought is based on opinion, not fact. We strive to reach the truth, without actually knowing what the truth is.

This explains why my conversation with my classmates was so unproductive, mainly because, instead of accepting each other’s approaches to prayer, we were trying to prove each other wrong. And this is a major problem in our Ummah today.

Why is it that in Islam we are taught to accept our human diversity in terms of race and religion, but not the diversity of discourse within the Muslim community? This irony is the epitome of why our Ummah is so uncooperative. We refuse to acknowledge each other’s differences as something beautiful. Instead, we blame each other’s opinions on the reasons for troubling global issues. Slandering each other because we won’t change our beliefs is not a tool to success; rather it is the knife that has sliced us into divided communities.

One of the most beautiful things about the religion of Islam is its concept of free and critical thinking:

“Who remember Allah while standing or sitting or [lying] on their sides and give thought to the creation of the heavens and the earth, [saying], ‘Our Lord, You did not create this aimlessly; exalted are You [above such a thing]; then protect us from the punishment of the Fire’” [Quran 3:191].

“Then to eat of all the produce (of the earth), and find with skill the spacious paths of its Lord: there issues from within their bodies a drink of varying colours, wherein is healing for men: verily in this is a Sign for those who give thought” Quran 16:69].

We have hundreds of scholars throughout history who have shared with and influenced the Muslim world with their new and profound opinions and explanations on certain aspects of the religion. But one of the most dangerous things that I have found Muslims across the globe doing is following a certain fatwa just because the majority of Muslim scholars agreed upon it. People do so without doing their own research for themselves and finding truth in what makes sense to them.

It is important to acknowledge the level of scholarship that our scholars have, but it is also important not to disregard the fact that we are humans too, and we have the ability to think and study on our own. We have the ability to make our own findings and formulate our own opinions and interpretations based on the knowledge that we gather. Sharing our interpretations and opinions of Islamic concepts creates an open-minded atmosphere among our communities. We can freely and comfortably allow ourselves to discover new perspectives.

Ijtihad, or the ability of human beings to think critically and independently, is a freedom that we were born with. It is a part of our human dignity and our freedom of choice. We need to use it, but we do not. “The universe around us is also God’s continuous communication. Independent thinking is thus another way to understand God’s message through reading His other book — nature,” says Dr. Muqtedar Khan in his article titled What is Independent Thinking? “Outside the discourse of the traditional jurists, intellectuals, reformers and philosophers, have seen independent thinking as not only inevitable but a mandate, that enables the continuous renewal and revival of the Islamic spirit.”

I urge the Ummah to study and delve deep into our religion and to develop in ourselves a level of scholarship that our human minds have the capability of creating.

Marwa Abdelghani lives in Los Angeles, California and is currently a sophomore at the University of California, Irvine. She works at the Muslim Public Affairs Council (MPAC) as the Community Outreach Fellow, and is also an advisory board member of NewGround: A Muslim-Jewish Partnership for Change.

October 2, 2014
Hajj 2014 - Considering Alternatives to the Animal Sacrifice (Qurbani) of Eid-ul-Adha
Next Post

October 10, 2014 Thank You, Bill Maher, for Proving Islamophobia is Real
Recent Comments
0 | Leave a Comment
Browse Our Archives
get the latest from
Muslim
Sign up for our newsletter
POPULAR AT PATHEOS Muslim
1