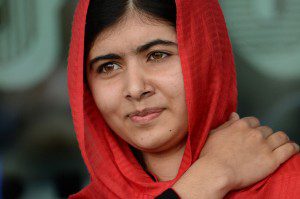 It’s a proud moment for Pakistan, but many Pakistanis aren’t embracing it.Malala Yousufzai — the courageous, 17-year-old young woman who became a global beacon of hope for girls seeking to gain an education — has won the Nobel Peace Prize.Predictably enough though, it hasn’t taken long for the critics to mobilize.Since Friday morning when the news broke, much of the response on social media has been favorable. But unfortunately, many reactions have been discouraging and antagonistic. One blogger wrote Yusufzai off as a “loser” who doesn’t deserve to be recognized with such a prestigious award. Another called her a “sellout” who sacrificed her country and principles for fame and glory.

One critic harshly described her as a “tool.” Many others complained that she’s only 17 and questioned whether she even qualifies for the Nobel Peace Prize.Reading these comments was difficult, not just because they force us to confront the unpleasant side to human nature, but also because they exemplify a growing, disturbing trend of armchair critics who consider themselves qualified to belittle the well-deserved accomplishments of others.The source for some of the bitterness can be understood. After all, nothing makes us as keen of our own shortcomings than seeing others accomplish great things. That they happen to accomplish them at such a young age — well, that’s just salt in the wound.It’s difficult for some to digest that this young Pakistani girl, with her father’s help, rebelled against and arguably made more progress in dismantling the Taliban’s archaic, un-Islamic traditions than even the world’s most powerful military.That should be reason to applaud — not begrudge — her.But rather than chastise the Taliban’s unethical practices that have harmed the perception of Islam and Muslims worldwide, many accuse Yousufzai of being a willing accomplice in justifying what is often perceived to be the West’s war on Islam. They conveniently ignore that she was an innocent schoolgirl who’s passion for learning so threatened adult men that they attempted to murder her on a bus as she traveled to school.Because she re-located to Great Britain with her family out of concern for her safety, Yousufzai is blamed for turning her back on her country. This, despite frequent affirmations that she refuses to allow threats from the Taliban or any group from dissuading her from one day returning to Pakistan after she completes her education.Some Pakistanis argue that Yousufzai’s father is using her to advance “his own agendas.” If that agenda includes sending your daughter to school without being killed, well he too should be applauded. Frankly, he is a role model for other men in patriarchal societies that still hold women in low regard.Others argue that the elder Yousufzai deserves the credit for his daughter’s success. Not she. After all, he manages her engagements and public affairs and ensures she attends United Nations meetings.Aren’t parents often a major reason for their offsprings’ success? I know mine are. Ideally, all fathers should be so involved and vested in their daughters’ — and sons’ — futures. The fact that he provides guidance and support doesn’t diminish his daughter’s accomplishments; it only magnifies his own esteem.Yousufzai’s father should be recognized for steadfastly paving the way for her to gain an education despite the challenges that stood in their way. More fathers should follow his example and encourage their daughters to be ambitious, set the bar high and never be afraid to fight for a just cause.

Some complain that because the father/daughter duo allegedly have political aspirations in Pakistan, they must be corrupt. Seeing the deplorable track record of Pakistan’s elected officials, it’s not difficult to see why one might think anyone who aspires to public office in Pakistan must harbor ill intentions.

Who knows if that’s actually what their plans are, but at the very least, if these two come into power, Pakistan’s literacy rate is bound to increase. If they do have political aspirations though, then I hope they will leverage them to establish a legacy in Pakistan that would make it’s founder Jinnah proud.

Some of the more cringe-inducing conspiracy theorists hypothesize that Yousufzai must be spying for the CIA or Mossad. They clearly fail to see that the determination and confidence Yousufzai projects in striving towards her goals are influenced largely by her Islamic faith, which makes seeking and acquiring knowledge incumbent upon all Muslims — including women.
I don’t envy the Nobel Peace Prize selection committee the onerous task of having to consider and select recipients.

Let’s face it. For all the horrible people who do evil things in the world, there are many more compassionate, selfless and courageous folks who work tirelessly to improve the condition of humanity.

But I do feel pity for people who cannot find the grace and class within themselves to acknowledge that this young woman — who overcame overwhelming obstacles, stirred dormant consciences, launched a global movement, inspired millions worldwide and who through it all continues to smile and joke with self-deprecating humility — is deserving of such an honor.
Congratulations, Malala. Continue championing the cause for girls’ education and making (most of) Pakistan proud. May your conviction, courage, determination and bravery give rise to a thousand more like you.

Zainab Chaudry is the Maryland Outreach Manager of the Council on American Islamic Relations. CAIR is the nation’s largest Muslim civil rights and advocacy organization.

October 10, 2014
Thank You, Bill Maher, for Proving Islamophobia is Real
Next Post

October 30, 2014 The Case for Social Media and Hashtag Activism
Recent Comments
0 | Leave a Comment
"FsyYOU are hate. Period."
Soren A Ramadan Testimonial of Repentance and ..."
"Thank you for sharing this article along with detail information, and you have mention the ..."
wazeer shaik The Path Through Hajj – One ..."
"Tamerlane is considered an oppressor amongst Islamic scholars and an anti-hero in Islamic culture. It's ..."
Ali Inspiration: Star Wars: An Islamic perspective
"did you head to syria? did you take ilisha?"
mike malzahn Quran, Hadiths or Both? Where Quranists ..."
Browse Our Archives
Related posts from altmuslim