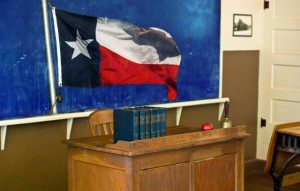 Before I go further, I want to tell you a story. The year was 1994, and I was a freshman at a high school in Houston. I was new to the campus and the only student who wore hijab (the head covering worn by many Muslim women). I experienced bullying only once during my time there — a junior called me a name as I walked past him on my way to class. Once was all it took.

Enter Dr. Virginia Leiker, our principal. When Dr. Leiker heard of the incident, she called me down to her office and spoke to me in a way that I will never forget.  She made it clear that I was to feel safe and comfortable in her school at all times and that NO disrespect of any kind would be tolerated. She made sure that I felt safe within the walls of that school, and for a shy freshman, her protection meant the world to me.

This is why the following turn of events, almost 20 years after I felt such respect from my school, stings so badly. Recently, in the Lamar Consolidated Independent School District, located in Richmond, Texas (a suburb of the diversely populated city of Houston), an AP economics teacher at Foster High School decided to “stray from his lesson plan,” (so says the principal in an email response I received earlier today). In reality, the teacher’s offence wasn’t a change to his lesson. It was inaccurate, Islamophobic rhetoric designed to entice hatred towards Islam and Muslims. It was bullying behavior.

In the lesson plan the teacher created, there were such gems like this:

“If you are [non-Muslim], you need to know that there are millions of Muslims who believe it is their mission to war against you.”

This was only one statement of several pages of notes handed out on Islam. The content was taken directly from anti-Muslim websites and known Islamophobes. Also included was advice on “what to do if you are taken hostage by radical ‘Islamists.’”

I couldn’t help but feel sadness today as I learned the news of this incident.  I had relied on educators in my youth to help me feel safe at school and a part of the school, and here, 20 years later, it is the “educators” themselves who are the bullies from whom we need protection.

My heart weighs heavily tonight knowing that young, impressionable minds were subjected to their teacher’s ignorance and blatant attempt to incite hatred and violence against a group he disagreed with. It might be 2015, but hate mongering and racism are still in our public schools, in a much worse form now.

When I contacted the principal to express my outrage, he promptly replied stating that “Arbitrary curriculum decisions, which are clearly outside of the guidelines, won’t be tolerated.”

I await his decision as to what repercussions await a teacher who didn’t simply make “arbitrary changes to curriculum,” but who taught the lesson of hate. I hope the message is sent loud and clear: There is NO tolerance for hate in the classroom.

Saira Siddiqui writes the blog, Confessions of a Muslim Mommaholic. She is mother to three children (who she unschools).

March 31, 2015
To Ayaan Hirsi Ali - The Problem is Not with Islam, but with the Author
Next Post

April 9, 2015 Questioning the 'ISIS Brand' of Islam
Recent Comments
0 | Leave a Comment
Browse Our Archives
get the latest from
Muslim
Sign up for our newsletter
POPULAR AT PATHEOS Muslim
1