And Then I Cried – Election 2016 Reflections

And Then I Cried – Election 2016 Reflections November 15, 2016 Guest Contributor

Blue! Could it really be? Miracles do happen.

Four years ago, I had gone to bed well before the election results were called out. Early next morning, I looked out the window and saw the majestic Empire State Building gleaming in blue. I knew then that Barack Obama had won the election.

Perhaps Hillary picked up the outstanding votes in Ohio, Michigan and Wisconsin; maybe she had won after all.

I folded away my prayer rug, and walked over to the TV. The screen came up. “President-Elect. Donald Trump”.

I pressed the “off” button.

I did the only thing I know to do when I begin to despair. I picked up my prayer beads and started reciting the names of Allah. In the silent morning, the sky still dark, the buildings beginning to take shape against the sky, I meditated over the tasbeeh, trying to block it all out. I couldn’t. Eventually, it hit me. I curled up, hugging my knees, letting the depressing feeling pull me down. I wanted to crawl back under the covers, and stay there.

And then I cried.

I had almost stood up when Hillary walked in (on the TV screen) to give her speech; I had almost clapped when she finished. That is when I had switched off the TV.

OMG! Today I have to give a lecture at the learning center, on Islam. Today of all days! How am I going to get through it? How will I face the class?

My cell phone blinked. A friend from across the oceans had texted me verses from the Quran, “Nothing shall befall us except what Allah has willed for us. He alone is our Protector, so in Allah, let the believers place their trust.”

Place your trust in God. Things happen for a reason. Trust God.

The classroom was filled to capacity. I sensed the energy in the room and relaxed.

“Good afternoon.” And then I just said it. “I did not have a good morning today.” There, I had done it; opened a lecture on religion with a dose of politics.

Affirmative murmurs of anguish soothed my nerves, and I was at home. We were all on the same wavelength.

It’s my chance to make a point; to lift the veil; to ‘un-other’ the ‘other’; to de-mystify my faith; to make friends.

Quran, Shariah, women’s rights, suicide bombing, violence, polygamy, divorce. You name it, we talked about it. And of course, the ubiquitous “why aren’t the Muslims speaking out?”

People engulfed me expressing their sadness and shock at the election outcome, and a “we want to know more” feeling permeated. Off-line chat continued after class, into the hallway by the coat-rack, in the elevator, in the lobby and out on the sidewalk. My battery had been re-charged.

An email from a minister said, “Gatherings are being held in NYC this evening, hosted by houses of worship and civic organizations to discuss post-election next steps.” I recognized a name on the list — a synagogue in my neighborhood. “Is it open to the public?” I inquired. Minutes later, the Rabbi sent me an email, inviting me to come.

That evening, my husband and I walked down to the Temple Sharaay Tefila, and the Rabbi was the first to welcome us. More than a hundred people filled up the sanctuary as the cantor strummed the guitar, leading the gathering as they sang Adonai Oz (May God grant strength to God’s people; may God bless God’s people with peace).

The Rabbi’s speech was a balm on my bleeding heart. Acknowledging the feelings of the congregation, he appealed to us to take concrete steps to ensure that our values remain cherished, urging each of us to play our role as individuals. I felt a sense of direction. It doesn’t matter who is at the helm, we have to “… ask what we can do for our country,” and then do it.

Upon his prompting, we got out of our seats, looked for someone we didn’t know (which for us was no problem), and in one word, described how we felt. The woman I spoke to was sad. I told her I was worried.

What followed was interesting. We broke out into discussion groups with facilitators, and a charge for each of us was to tell a story that expresses our feelings. That got a buzz going. Everyone on my table had the same feeling: shock, sadness, outrage and concern for the future, for their children, for their grandchildren.

Is NYC that homogenous? Or is it that only those 100 plus people showed up who were so saddened by the outcome that they needed a support-group-type-session to deal with their anguish? I certainly did, and I got what I went looking for.

“Please come back” was what people kept saying to us. We parted, exchanging business cards. Next morning, one of them had already connected with me on LinkedIn.

God works in mysterious ways. Wasn’t it Martin Luther King who said “only in the darkness can you see the stars?”

Yet, I worry. I worry that whereas a President is constrained by the balance of power, how are we going to contain the genie out of the bottle — the forces of bigotry, racism and xenophobia? Who is going to control the man on the street who believes that his actions are sanctioned by the highest authority in the land?

It’s the second week post-election, and I am worried.

Sabeeha Rehman is the author of the memoir Threading My Prayer Rug. One Woman’s Journey from Pakistani Muslim to American Muslim.

November 13, 2016
American Muslims Leaders and Activists Respond to a Trump Presidency
Next Post 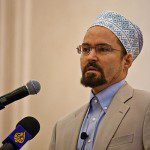 November 17, 2016 For the Sake of the Struggle, Don't Give into Fear - Reflections from Sh. Hamza Yusuf
Recent Comments
0 | Leave a Comment
Browse Our Archives
get the latest from
Muslim
Sign up for our newsletter
POPULAR AT PATHEOS Muslim
1