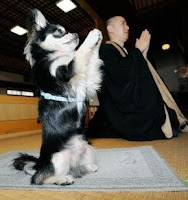 NAHA, Japan (AFP) – – Buddhists clasp their palms together to pray for enlightenment, but Conan, a chihuahua, appears to have more worldly motivations.

The dog has become a popular attraction at a Japanese temple after learning to imitate the worshippers around him.

“Conan started to pose in prayer like us whenever he wanted treats,” said Joei Yoshikuni, a priest at Jigenin temple on the southern island of Okinawa.

“Clasping hands is a basic action of Buddhist prayer to show appreciation. He may be showing his thanks for treats and walks,” he said.

Conan, a two-year-old male with long, black hair and a brown collar, sits next to Yoshikuni in front of the altar and looks right up at the statue of a Buddhist deity. (rest of the story)

March 24, 2008 A Theistic Buddhist?
Recent Comments
0 | Leave a Comment
Browse Our Archives
get the latest updates from
American Buddhist Perspectives
and the Patheos
Buddhist
Channel