– the intersection of chaos and awareness.

Recent studies of mine have veered in a rather new and strange direction these last couple months. While still pursuing my ph.d. in Buddhist Ethics, I have found myself in the midst of the fascinating – and yet in so many ways horrific – world of personality disorders – (wiki it). My own journey has been interesting in many ways (a person very close to me is most likely suffering with BPD), but far more worthy of attention is the disorder itself.

It’s hard to know just where to start in explaining Borderline Personality Disorder (BPD). The image below may begin to evoke the raw emotion and pain of a person with this. 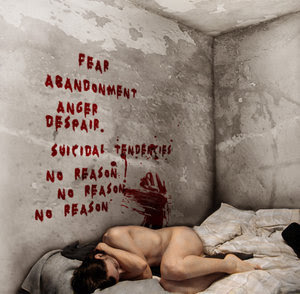 But what the image doesn’t show is that people with BPD are often in so many ways just like anyone else – very capable, intelligent, functioning, fun-loving, caring and wonderful human beings. The problem occurs when emotions become intense, which is why BPD is sometimes called a “disease of intimacy.” It may be only in close relationships that ‘symptoms,’ such as those in the image, appear.

The exact causes of BPD are unknown, but sufferers often report a history of childhood abuse, especially sexual, and otherwise difficult early home-lives (many are the children of parents with personality disorders themselves). Of course, abuse and/or ‘crazy’ parents are neither necessary nor sufficient to cause BPD. Studies have suggested that the brains of people with BPD have developed differently than those without it, especially with regards to the limbic system (as I mentioned briefly in my recent post – see footnote).

I don’t know all of the science that well, but due to what could be any combination of genetic pre-disposition, abuse, and/or other environmental factors, the BPD brain is simply less capable of filtering intense emotions – ranging from intense joy (success, promotion, etc) to sorrow or agitation (accusations, criticism, loss…). Non-BPDs suffer these same emotional states, but when we do, our cognitive functions kick in to stabilize us. Our attention to long-term goals/plans balances us out, while BPDs are consumed in the moment-to-moment feelings. Again, I think non-BPDs can empathise – to a degree. I’ve been ‘consumed by emotions’ at times, but I’ve been able to tell myself to go take a bath or a nap or to call a friend or family member and talk it out. But for the BPD person, those thoughts have a much harder time coming through.

For partners, friends, and family this can be incredibly difficult as well. Not only do they see their friend or loved one react eratically to emotions, they can also stumble across ‘triggers’ – seemingly mundane actions or words that trigger a memory of past trauma in the BPD person, sending him/her down an emotional sinkhole. This is so difficult and pronounced in BPD that “A pervasive pattern of instability of interpersonal relationships” is usually the first symptom found in sufferers of BPD.

~
Treating BPD is likewise very difficult. Like anything, it occurs on a spectrum of severity, but as a whole it is amongst the most resistent to treatment. This is due to two factors: denial and physical damage to the brain. Denial is the most difficult. Most borderlines, even when confronted with the knowledge of having the disorder, will not seek or follow through with treatment. Why this is is not exactly clear.

One reason may be that they have built such an identity as ‘victim’ (which is to some extent correct – given their likely childhood abuse) that they simply cannot see that they are now harming others. Another reason may be that the facts of their behavior, and, more difficultly, the abusive history that has led to it, may be too hard to face. Again, while a borderline maybe extremely functional in day-to-day life, they are incredibly fragile when faced with emotional issues.

And even when denial is overcome, treatment options are still debated. This image shows how health-care professionals in different disciplines all see different aspects of BPD: 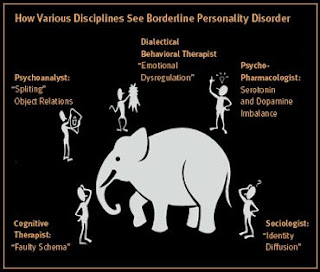 All, of course, have some truth. Going around the circle:

The one of these that caught my eye most was Dialectic Behavior Therapy, developed by Dr. Marsha Linehan, a psychologist and Zen practitioner under Father Willigis Jaeger (Ko-un Roshi), a German Benedictine monk, Christian mystic, and Zen master.

I have yet to study it in depth, but it appears that Dr. Linehan’s technique is to combine cognitive behavioral therapy with the mindfulness trainings and skills of Buddhism (and other contemplative traditions). The results are highly promising. While the difficulties in traditional treatments often led BPD to be described as “untreatable,” DBT – Dialectical Behavior Therapy – may achieve an over 85% remission rate with ten years of treatment (meaning the person no longer qualify as ‘borderline’). Ten years is a long time. But living that same ten years without treatment would feel like even longer.

My next step is to study DBT a bit more in depth. I’ve volunteered to give a talk on the topic at the University here for philosophy students and will also give a preview talk to a local Buddhist group. One of the things that has fascinated me as I have begun studying and talking to people about this is the split between those who had never heard of/encountered personality disorders and those who immediately recognize it and have gone through the ‘craziness’ of it themselves or with others.

It is my sincere hope that by talking of my experiences and what I have learned that at least one person out there will recognize this in him/herself or a loved one and, knowing that help is out there, begin the process of healing.

September 18, 2008 A Peaceful Day
Recent Comments
0 | Leave a Comment
"I've read that borderline persons have a high sense of fairness and BPD is soooo ..."
steven solomon Borderline Personality Disorder and Buddhism (IV)
"I came across this site by accident, It reminded me of a story about two ..."
quacknduck Tourists: Buddha Tattoos are Taboo; as ..."
"eMudhra Limited is a certified body, licensed by the Government of India. eMudhra operates in ..."
Mycaportal Buddhism: Dzogchen and Mahamudra
"folks hav to learn the local laws wen they invade the space"
Joe Biggs Tourists: Buddha Tattoos are Taboo; as ..."
Browse Our Archives
get the latest updates from
American Buddhist Perspectives
and the Patheos
Buddhist
Channel
POPULAR AT PATHEOS Buddhist
1