Buddhism and Abuse, or “loving the enemy”

Buddhism and Abuse, or “loving the enemy” November 15, 2008 Justin Whitaker

This is an elaboration of a Dharma talk I gave for our campus sangha this week. We have been doing the metta bhavana (cultivation of loving-kindness) for a couple weeks now and a question has arisen:

How can we practice non-discriminating openheartedness without potentially becoming a doormat to harmful people in our lives?

Or, as I placed the question to a teach of mine recently: How can we love unconditionally even those who have hurt us?

My teacher answered by saying we need to differentiate between two levels: the spiritual and the psychological, understanding that they are not the same. In meditation, a lot of the time our work is psychological. We’re dealing with past emotions, traumas, future worries, and so on. That is not spiritual work; but it is nonetheless work that needs to be finished before entering the spiritual levels of meditation.

In the metta bhavana, when we come to that difficult person in our lives, the goal is not to work things out in your head. The goal is to open your heart full to this person, on a spiritual level. Realize that he or she, like all beings, wants happiness and freedom from suffering. Just that. Know that he or she is in pain in his or her own ways and wish, honestly, that he or she can be free of pain.

~
Opening up on the spiritual level doesn’t have to mean we let our guard down on the psychological. That person may still be harmful to us in day-to-day life and we may need to steer clear of him or her. But now we do so with a heart open to this person’s sufferings (realizing that he or she has harmed you only out of deepest ignorance).

I told the story of the Dalai Lama in Tibet. Just before finally fleeing to India he was invited by the Chinese to a play or movie. They gave him a sweet, flowery invitation filled with kind words, but also with the words, “please, come alone.” Despite surely having a profound love for these Chinese, the Dalai Lama and his advisors recognized that this was likely a ploy to kidnap or kill him. So perhaps we can add a third, physical, level to my teacher’s distinction. No matter how deep the Dalai Lama’s love for the Chinese, it would not have prevented them from committing a horrible act if he had let them.

Likewise, we practice unyielding spiritual openness to difficult people or ‘enemies’ – and yet we still keep our physical, and even psychological guard up.

Recently I have been meditating in my daily practice on these verses from the Dhammapada: 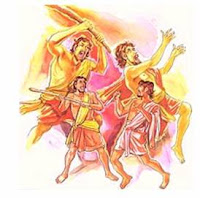 “He abused me, he beat me, he defeated me, he robbed me,” in those who harbour such thoughts hatred is not appeased. 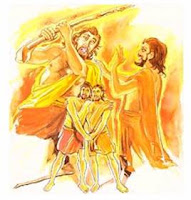 “He abused me, he beat me, he defeated me, he robbed me,” in those who do not harbour such thoughts hatred is appeased.

The word translated as “hatred” here is upanayhanti, which means more of a grudge or scorn than outright hatred as we think of it these days. I have been working on these verses for very personal reasons: I’ve had these thoughts – and even shared them with some people. So what is a Buddhist to do? Are we not allowed to say, “hey, this person beat me, this person abused me!”?

A very philosophical Buddhist might say, “ah, but there is no me or her – but there was abuse!” thereby getting the same point across.

But I don’t think that is what the verses would suggest. In another often-told Buddhist story the Buddha describes holding such thoughts as like picking up red-hot coals with your bare hands to throw at an enemy. You just keep burning yourself.

The next line in the Dhammapada reads: 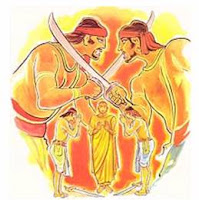 Hate is not overcome by hate; by Love (non-hatred) alone is hate appeased. This is an eternal law.

And it is not just the feeling of love, but the practice. Knowing, again thinking of the three levels, that this person may be harmful [to us] psychologically or physically, we keep that guard up. This protects not only us, but also prevents him/her from committing the harmful act we see him/her on the verge of. Paradoxical as it may seem, we can flee a person or avoid him or her out of love and wisdom. And, if such thoughts as these above still occupy our minds, we can practice metta bhavana – out of love for ourselves and for this difficult person of ours.